It’s a gorgeous holiday weekend, but I’m not holidaying much today. I’ll feel better if I get things done. I’m missing a picnic with my drumming friends, but I’m going to see them all soon at a few drumming events.

– Updated The Restless Sleep blog so I don’t have to tomorrow.
– Emailed the contact for Bill Roll about what to read. (One of the Duke guys.)
– Worked out at the Carmine Street gym (which is actually on Clarkson and is now called something else).
– Emailed Det. Tozzi’s relatives. He was the Nassau County detective who investigated the poltergeist with Gaither Pratt and Bill Roll in 1958.
– Listening to more of the tapes made 30 years ago of the Duke scientists, while I do all my need-to-be-hand-laundered laundry. Two tapes down today, five more to go and I’m done!

– Hand-laundry done.
– Nice email exchange with Joe Tozzi’s daughter.
– Me and Finn listen to tapes. Rhine is venting to the historians, because he doesn’t agree with their representation of him. Four more tapes to go. 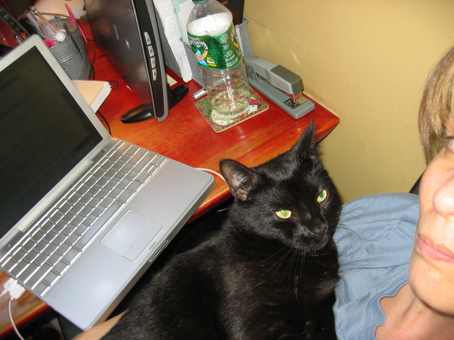 – My friend Liz was in a car accident! She’s okay though, and she went on to LI.
– The Rhines are really letting the historians have it now. (The historians, by the way, did an astounding job. The Rhines didn’t like the book at first, but after some time they decided that the historians had done a good job after all.)
– Another friend, Janet, gets a new puppy, Lily, who sleeps on top of her other dog, Tuscany. I’m trying to beat Just a Little Guy and Cuteoverload to the punch. I mean, come on. Look at how cute these guys are. 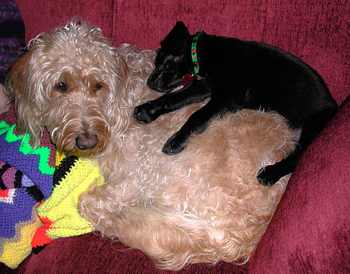 – Very boring dinner eaten (broccoli, cottage cheese, bread).
– Cats fed.
– On Echo, my friend Joe gets mad because I never laugh at his jokes, only Howard’s.
– Three tapes to go.

I know this is boring. I’m sorry. I’m entertaining myself while I listen to these tapes, and it gives me a sense of progress. I’m also looking at kittens who are up for adoption on the Animal Care and Control website. 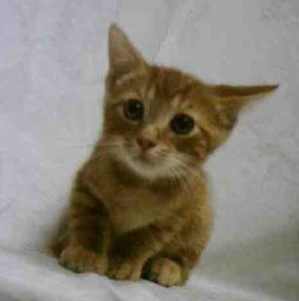 – Told my friend Joe that I was mocking him here and it took him 15 minutes to find the address of my blog. Joe is search-challenged, poor thing.

Here’s Joe. We met when we were grad students at NYU. He works at Stanford University now.

– I’m on the second to last tape now. I don’t think I can take much more of this.
– I’m half listening, and half reading about the Spook Light in Hornet, Missouri. I read about this when I was down at Duke, and wanted to go there and do a piece about it for NPR. Alas, they thought about it, but decided to pass. It’s such an interesting unsolved mystery. The Army Corp of Engineers looked into it and couldn’t figure out what it was. They called it a “mysterious light of unknown origin,” and gave up!

Here’s an old picture of the Spook Light. 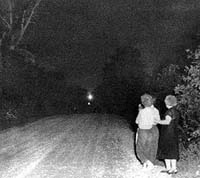 Here’s a picture of the Spook Light Museum. It’s gone now, I believe. Someday, I want to go to Missouri and re-open the museum. Doesn’t it sound like a fun, end-of-life occupation? I want to see the Spook Light! 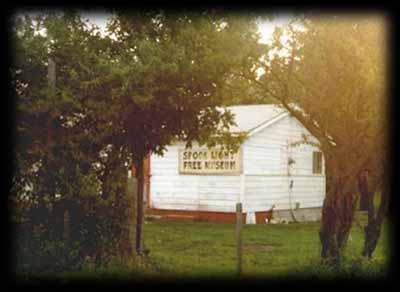 – Officially going out of my mind with these tapes.
– Cats fed their evening snack.
– More email answered.

I’m going downstairs to photograph the sunset from my street. There’s supposed to be a spectacular sunset because of how the sun is lining up with the east/west blocks.

– Seeing two fighter jets in the sky. Is it still Fleet Week, or should I be grabbing my “go” bag?

My view of the sunset was blocked by trees. That’s a good thing, I think. Plenty of other views of the sun. 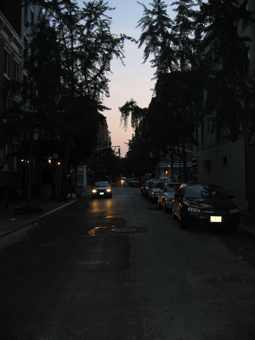 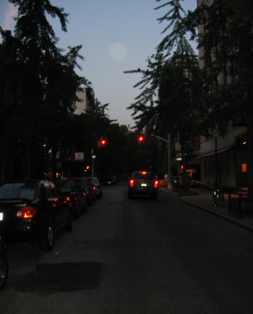 – Last tape started, it’s an interview with B. F. Skinner this time. He’s kind of a dick when it comes to Rhine. He sounds very smart, but also SO smug. I want to reach across time and smack him. When I was in college everyone repeated a rumor about Skinner raising one of his children in a box, (he was famous for something that was later referred to as a Skinner Box, which he used for animal studies) but it was completely untrue, I’ve read online. Still, he doesn’t seem very warm or generous.

– Just read that Skinner lived in the Village for a year (that’s where I live) and wanted to write fiction. Reading his bio on Wikipedia. Well, dick-ishness aside, a very interesting life. He died in 1990.

– DONE. I’M DONE. And now my holiday resumes. I will stop boring my friends now. Who are probably not actually reading this, thank GOD.

The Scariest Music in the World