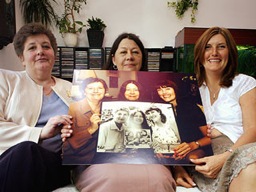 Yesterday, I went to the documentary 49 Up. Since 1964, every seven years they film the same people to see how their lives are going. It started as a political thing, to compare the lives of children from wealthy homes to children from poorer homes, but it ended up being so much more.

I went to see how other people my age are coping. At first I thought going was a mistake, because everyone in the documentary was coping better than I am, including a guy with mental health issues, who was my favorite. And, except for the guy with mental health issues, they are all MARRIED. Something I have not managed, even though I decided about ten years ago that I wanted be married. (I got married in my 20’s, but I didn’t really like being married at the time.)

What they seemed to have managed, that I haven’t, is that they have all made peace with their disappointments. Who doesn’t have disappointments?? But they’re being much more grown-up about it. Even the mental health guy seemed to have a better attitude than I have. (He was so charming and endearing. So fragile, and yet, hanging in there and doing so much better.)

I was emailing my friend Chris about this when I realized, maybe it wasn’t a mistake going. The Up kids inspired me.

It seems like every day I read something along the lines of “Family is what matters,” and people who are married live longer, and “the only thing that has any meaning in life are the people who love you,” usually spoken by people surrounded by spouses and children. And a dog. (Usually a german shepherd. Apparently the dog of choice of lovable people.) In other words, people like me: we fucked up.

Here’s how I’m going to look at it (the failure to get married, etc). Years ago someone who was giving me voice lessons played a recording of my choir singing. We sounded amazing. Far, far better than I would have imagined. I said, “They sound good.” I think I didn’t include myself because I don’t really have a great voice. It’s okay, and I sing in tune, but it’s not beautiful or anything. She said, “But you’re part of that. You’re in there. Your voice is part of that sound. You are contributing to that and it wouldn’t sound like that without you.”

That’s how I’m going to look at my life. My voice (life) is contributing something to the chorus of the world. It’s in there somewhere shaping the sound. I’m just singing a different part then most of you, apparently. Oh, and you’re all going to live longer than me which is SO not fair.