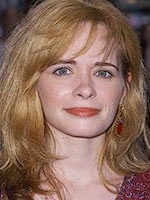 This is a picture of actress Adrienne Shelly, who was murdered on November 1. I met her because Echo produced an independent film series in the 90’s called Alt.Film and we launched with her first film, Sudden Manhattan. She was incredibly sweet and smart (and once fixed me up with a friend of hers). Her murder, like all murders, was horrible and stupid, but her’s was horribly stupid beyond belief. If you haven’t read already, her murderer punched her unconscious, and, thinking she was dead, hanged her to make it look like a suicide. The hanging is what killed her. She had a three-year-old daughter.

I found this section in her director’s statement for Sudden Manhattan. Rest in peace, Adrienne.

“It was empowering to chronicle and parody my own personality, and those of some of my friends. It was empowering to place it all in New York City, a place I have learned to love despite my fear of it. New York takes every step along with you. It mirrors what you are feeling. If you are depressed, you walk outside, and everyone is depressed, and the streets are gray. If you are on top of the world, the streets seem to burst with triumphant energy. New York helped provide me with the gumption I would need to write, direct, and star in my own movie. A New Yorker knows how to persevere despite fear.”

The Extended Stay People Love Ruby More Than Me

What can I add?

Please sir, can I have some more?