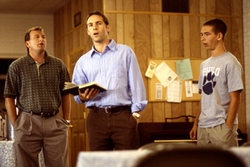 I love when I find new music in movies (new to me, that is). This is a scene from the movie, Junebug, which, by the way, is a sweet movie, worth seeing. They’re singing a hymn called “Softly and Tenderly.” It’s an incredibly beautiful little song. I downloaded a bunch of versions, but my favorite is by someone named Josh Turner.

I also watched Remains of the Day for the billionth time. That movie is like my theme movie. After, I downloaded the Schubert song that was sung by the German woman, (a Nazi–not the song’s fault) “Sei mir Gegrusst.” I don’t know what the words mean. Schubert wrote so many beautiful songs. Song is probably not the right word.

So, this week I went to a couple of parties and discovered that I have lost any gift for smalltalk I might have had. It was excruciatingly awkward for me (although I had fun talking to Teresa at both, and her son Andrew who came to the second). But what an ego pounding. At the first one, it was loud and crowded and everyone knew each other, the kind of situation that I find just impossible. The second was less crowded, but also loud, people standing around in small, tight clusters. Who is good at negotiating that?? Still, I’m happy that Steven invited me to both. Not his fault I clammed up.