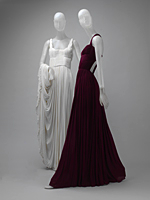 Still sick, but definitely on the mend today. God, I’m so behind in so many things. Plus, I still have to see all the main nominated movies before the Oscars. It’s not as fun to watch if you don’t have an opinion. I don’t think I’ve seen any, but for some reason cannot work up the energy to see Dreamgirls and at least ten others that I really should see in order to properly enjoy the show. That’s all kinda backwards, it just occurred to me.

I think I’d rather just wander around the Met. This picture is from a current show about American fashion. I love the dress on the right! I hate shopping, so I don’t have a lot of great clothes myself, but I love fashion. They’ve also got an exhibit titled “Glitter and Doom: German Portraits from the 1920’s.” Who can resist??

That reminds me, I watched an interesting show about mummies during my sick week of TV and books. It was about the history of deciding if a particular mummy was a royal mummy. After many decades they decided it was and the German guy who first proposed that it was and who had been shot down was still alive to be vindicated. That part was really nice, seeing him get the satisfaction of having been right all along. (I was so pleased for him, I had to wonder what I’m waiting to be vindicated about.)

I love mummies. Why isn’t there a mummy channel?? All mummies all the time.

I also watched a sad sad sad documentary about a failed British expedition to find the northwest passage. They got stuck in the ice and actually lived for years waiting to be rescued and trying to get out. They ran into a couple of Inuits here and there, but not one of the explorers made it out alive. It’s weird what you remember, but it reminded me of a comic book about pirates that I read when I must have been only 7 or 8. I will never forget the end of it. A woman was either ship wrecked, or left behind on purpose on an island, and I remember staring and staring at the final panel, horrified. She’s looking off to sea, hoping, but the text lets you know that there was no rescue. Was there a panel of her skeleton on the beach, or was that something I projected for her future? No, there was definitely a drawing of a skeleton. But now I’m not sure if she was alone. Maybe there was a couple. But I only remember her. (Not too hard to see the unconscious identification there.)

That just gave me an idea for a project. Make a list of the things I think I will think about on my death bed. What images, memories, I think will pass through my mind at the end of my life.