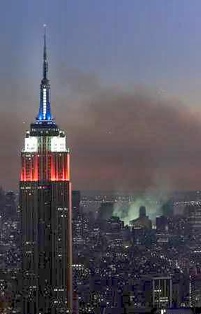 There is a piece today on 3 Quarks Daily about how Adam Gopnik and Roger Angell are wrongly nostalgic about New York, lamenting how it used to be, instead of appreciating the best thing about New York: change.

Normally I would have agreed with this. And by the way, making that point is nothing new. But I have to say, the change in the past, say, 15 years, is actually different this time. (Yeah, everyone always says that, too.) It’s different than the change from the 70’s to the 80’s, or from the 60’s to the 70’s (changes I’ve witnessed, and granted, those are small increments in the great, big scheme of things).

Here’s how it’s different. New York is not changing. It’s disappearing. And yeah, that’s not a new thought either. But it’s beginning to look and feel like everything else. Eventually it will be gone. The thing is, it’s not just New York, this will eventually be true of everywhere. Some places will be more resistant and will be subsumed more slowly, perhaps much more slowly, but eventually every place will be like every place else.

Unfortunately, we’ll all be dead relatively soon, so I won’t be around to say I told you so, and you won’t be here to roll your eyes and tell me to shut up.