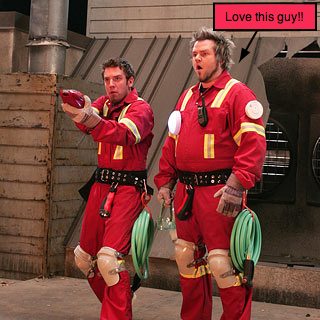 Reaper. It’s a show that’s going to be on CW. I haven’t been this excited and happy about a TV show in so long, probably not since Buffy. You can download the pilot, it’s floating around. I love the best friend and it was killing me trying to remember what I had seen him in and Howard remembered it was the canceled TV show Invasion. Another actor in the show I remembered (taking some credit) from War of the Worlds. He was the guy in that scene where they first see the tripod, and one of the guys says some wrong fact about the sun and this guy corrects him. The actor stood out for me.

The title of this post will become clear if you watch the pilot. The premise is, this guy’s parents sold his soul to the devil, (that’s the guy on the left). The devil puts him to work capturing people who have escaped from Hell and sending them back. These people are evil so even though he works for the devil ultimately he’s doing a good thing. By the way, they try to make what the parents did palatable, but it doesn’t really work. They aren’t evil, but still. You’ll see. (Or not.) The guy that plays the devil makes him a funny, swarmy bad guy, like what little I have seen of Alec Baldwin in 30 Rock (have to watch that show). He was great. “I can do nice.”

It will be so much fun to love a TV show again!

I shouldn’t have made that text box red. There’s too much red. I always try to pick up a color in the picture, but I should have picked a less prominent color, like the green from the hoses. Plus the position is wrong. Okay, so I’m not an artist! Actually, I went to art school so I have no excuse.

One thought on “Tape Hand”