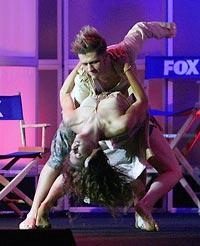 Now that I am on a sorta vacation I get to indulge myself with two great reality TV shows: So You Think You Can Dance (my favorite of all, I think) and Big Brother.

First, So You Think You Can Dance. Lacey is turning out to be just as vulgar as Benji, although like Benji, she can dance, and has her moments. But sticking that flower in her mouth and spitting it out after that beautiful moment everyone shared, even if the dance was over-rated. Mia’s feelings and what she was expressing, and the judge’s acknowledgment, were still genuine, and Lacey makes this crude gesture for votes. Seconds earlier that flower was this precious gift between father and daughter. It was just ugly.

I love Sara and was sorry to see her go. I’m not sure who I want to win. Technically Danny is the best, and Lacey and Sabra tied for second best, but I like Pasha more than all of them. I vote for Travis and Hok.

Big Brother. I was a Dick fan, but I just can’t root for him anymore, although I don’t dislike him, and if you were watching the feeds today you’d really pity the guy. He knows now that he’s been played, and he shouldn’t have voted out Nick, but he’s got it wrong about who and how. It’s torturing him. There’s going to be an explosion today. He thinks Eric is the mastermind, and when they both wake up, ugh. That will probably get ugly, too. But Dick has not played a good game. He never listens, doesn’t think, takes it all too personally, and his behavior towards Jen has been so over the top and I am now rooting for her, because she’s handled it so well.

Bones, I love you but what am I going to do with you??

My Internet Connection Was Down

Virus and the City: FOSTER