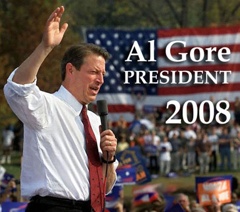 I couldn’t help hoping, like so many other people, that in light of the Nobel Peace Prize he might re-consider, but this Time piece is so convincing.

The reasons are so sound, I actually get it, but damnit, I want him to run.

I went to the Draft Gore website and signed the petition anyway, because I think the reasons for his running are equally sound. I wish I could find a copy of this Buddha story I love. It would be so appropriate now. It was re-told on the TV show Northern Exposure. I was thinking, well, maybe if the worst thing happens, and we all go to hell in a handbasket, it might end up being the best thing for the world in general. A better nation may rise elsewhere, for instance. There’s no way of knowing. Something that seems so awful today may end up being the best thing that could have happened. Oh! I found the Northern Exposure version of the story.

There’s just no way of knowing. Don’t get too attached to your feeling that something is good or bad, and be like the warrior. Go with the flow, as they say. This doesn’t mean you shouldn’t feel good or bad about things, but part of you should be aware of the wisdom in the above story.

Day One of Holiday Cleaning Done

2 thoughts on “Why oh why can’t this dream come true?”