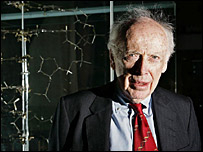 Watson, who won the Nobel for discovering the structure of DNA, “said he was ‘inherently gloomy about the prospect of Africa’ because ‘all our social policies are based on the fact that their intelligence is the same as ours – whereas all the testing says not really’.”

“He went on to say he hoped everyone was equal but that ‘people who have to deal with black employees find this is not true.'” How discouraging. Story here.

Although, it was a frequent complaint among the parapsychologists that science shouldn’t block the way of inquiry just because they didn’t like what they found. This is, of course, racism and not science, but I would bet that Watson would make a similar argument. I wonder what he even means. How are we not the same exactly? Sad, sad, sad.

HEY! I just got a coupon for $1,000 off a crypt at St. Joseph’s Mausoleum. First, don’t rush me. And second, I couldn’t possibly care any less about what happens to my body after I’m gone. I checked off the donor thing on my license, made arrangements for my cats, and as far as I’m concerned my job is done. To my family: don’t spend a cent beyond what it costs to cremate me, and there should be enough in my savings to cover that.

What do you know, we can make a difference.