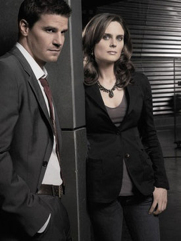 I know my TV. I want everyone to try this show called Bones. This week’s episode was so good I’m at the point where I now have the pleasure of a show I look forward to almost as much as I used to look forward to Buffy the Vampire Slayer. (And the two shows have one actor in common, David Boreanaz.) My involvement isn’t as intense, it’s a different thing, but my point is: watch it. It keep rising and rising in quality. The writing is just so great. The stories keep getting better and more inventive and have depth and reality, the characters funnier and more endearing and realistically complicated. Oh and they add characters here and there that I just adore, like this new therapist name Sweets.

Their instincts are so good. I notice that characters I didn’t really get into are gone. At one point I was worried, because they gave Brennan a new boss, and at first I thought it was going to be this cliched thing. The new boss was a woman (Brennan is female) AND she was seeing Brennan’s partner, so there were two familiar ways it could go at once, but it didn’t and now I adore her boss too. We’re left with this perfect ensemble. Maybe that’s part of the reason I’ve grown so attached to it, I love this group.

Download it, bittorrent it, whatever. It’s worth the investment of time. You need to go back so you get to know the characters and see the development. I worry that the first few shows may not have been as great as they figured out what works and what didn’t and developed the characters, but don’t worry, I know they were at least really good. This season every show every week has been a home run.

The picture is the two main characters, FBI agent Seeley Booth on the left, and Dr. Temperance Brennan, aka “Bones,” a forensic anthropologist, on the right.

Your Life Is a Book: How To Craft & Publish Your Memoir

2 thoughts on “Watch the TV Show Bones, I’m Begging You”