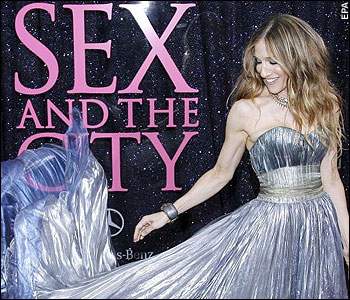 Yeah, I went to Sex and the City on opening day. In the middle of the day. BECAUSE I CAN.

This movie is so far from deserving any of the hate and scorn that has been heaped upon it that I am going to go on record as saying that anyone who has gone off on it like that is not on the same planet as I am. I’m not saying everyone should like it — maybe it’s not your cup of tea. But to hate it and especially to call it shallow? You watched the movie through some wormhole, and typed out your strange, angry little reviews from afar with all twelve of your brittle, praying mantis-like arms. (But if our universe dies someday and humanity has to escape through a wormhole to your universe, please forget the whole praying mantis arms thing. Here are some compliments in advance: “Oh my God! There’s not an inch of flab on any of those well-toned arms! Are you working out?”)

My friend Emily said the Los Angeles Times had the best review and I agree. From the review: “Michael Patrick King, who executive produced the show (with series creator Darren Star) and wrote and directed the movie, has done some brave, surprising things with it, mining territory that’s been all but abandoned by Hollywood. It’s hard, in fact, to think of any other recent examples of movies that explore the complicated emotional lives of characters comically without stooping to adolescent silliness or that are willing to go to such dark places while remaining a comedy in the Shakespearean sense …”

This movie is actually wonderfully deep, sweet and tender. I keep wanting to quote this LA Times review. “For a film that delights in indulging in frivolity at every possible turn, it examines subjects that most movies don’t dare graze for their terrifying seriousness. And when it does, the movie handles them with surprising grace, wit and maturity. In other words, it’s a movie for grown-ups of all ages.”

I was a little afraid going, how could it possibly meet my expectations? But the girls (and everyone else behind this movie, of course) done good. They hit it out of the park. Well done, SATC cast and crew. And thank you.

4 thoughts on “Sex and the City”