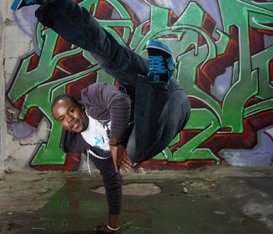 My favorite of all is Joshua, who did the hip hop/contemporary routine about going to Iraq. Katee was great too, much better than I expected even, but Joshua was just outstanding. And cha-cha Chelsea. Good fucking LORD. But I loved Thayne in that dance too, and I so agree with every word of Scott Patrick Wagner’s blog write-up that I’m cutting and pasting it:

“Chelsea and Thayne came next. STANDOUT! From the minute that girl hit the stage for this cha-cha, she was unstoppable. It was all there, and remarkable for the nonstop stage presence they were both churning out. As the judges mentioned, Thayne had a slightly unenviable task, playing support to her whirlwind. But I think he absolutely shined on his own. He is one of those interesting cases of someone who I find rather uninteresting when he’s just talking, but when he hits the stage he becomes hugely attractive. He was every bit as sexy as she was in that number, and he is my official show crush. If this were an order for a boyfriend instead of a TV show crush, I wouldn’t mind if he were 10 (or 20) years older, but he is otherwise dreamy and fantastic and siiiiiiiigh.”

Wagner is a dancer, so if you want to read his complete round-up, which is great, it’s here.

After Joshua and Chelsea, I loved Kherington and Twitch. I know I’m supposed to already love Twitch, but I didn’t until this dance. Now I love Twitch.

What else? The wedding dress in Mia’s piece bugged me because it blocked actually seeing a lot of what the dancer was doing.

Last, Comfort, surprisingly to me, was mediocre, on all levels and I was really surprised the judges were so complimentary. Comfort was my early favorite, but I thought it was blah and all her movements felt half way there. She didn’t go all the way.