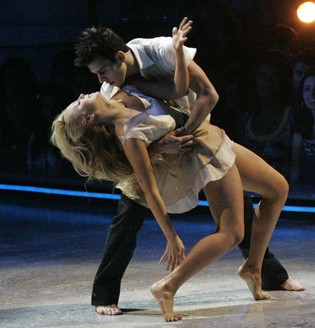 I know Gev wasn’t the best dancer, and I didn’t expect him to win, but I did expect and hope that he would last longer. I enjoy watching Gev more than many of the dancers left, which isn’t meant as a slight against them. He’s just got something. I enjoy watching him more than the others even when he was messing up. There’s a passage in Pride and Prejudice that captures this seeming contradiction. Jane Austen is describing two characters who have just played the pianoforte. Gev is the Elizabeth:

“Mary had neither genius nor taste; and though vanity had given her application, it had given her likewise a pedantic air and conceited manner, which would have injured a higher degree of excellence than she had reached. Elizabeth, easy and unaffected, had been listened to with much more pleasure, though not playing half so well …”

Although I think Gev was better than “half so well.” There were times when his dancing was technically breathtaking and inventive. But there were other things that were new to him, and he didn’t have the training that most of the other top 10 have, so the point remains. For the perfect lament about Gev no longer being on the show, go here.

One thought on “It Won’t Be the Same Without Gev”