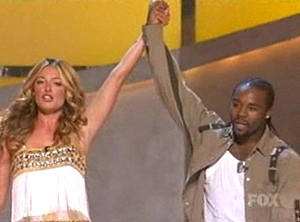 Our boy won! WOO-HOO!! I couldn’t believe it! I was thinking the last time someone I wanted to win won was Clinton, so this means, I’ve decided, Barack is going to win. America is on a getting-it-right streak.

Things didn’t look promising at first. I liked Philip Chbeeb over the other guy, and then Katee was eliminated before Twitch (insane) and while I’m at it, Twitch should have been eliminated before Courtney too, but thank the lord, Joshua won. My sweety-pie Joshua.

Other thoughts: I loved seeing Mary dance, but that was a poor choice of a routine. I think she couldn’t help suffering by comparison, that was one of Katee and Josh’s best and most fun routines, and the dress was just bad. That said, she was great, and it was sweet and fun to see her dance. And Nigel too, I have to say, who did a great job.

I wish they had picked routines that featured dancers we hadn’t seen in a while, like Thayne and Chelsea’s samba, and I LOVED seeing dancers from former seasons. MORE OF THAT. Much more of that please. In fact, when they were picking routines they should have picked from all seasons.

Anyway, it’s over until next summer. Now what am I going to do??

Oh, I don’t know if I’ve mentioned it, but Jackie has been helping me (actually, she’s doing all the work really) moving my blogs to different and more up-to-date software called WordPress, and we’re almost done. I think I will be able to imbed sound into my posts with WordPress, which is one of the things I’ve wanted to do.

What I See on 11th Street