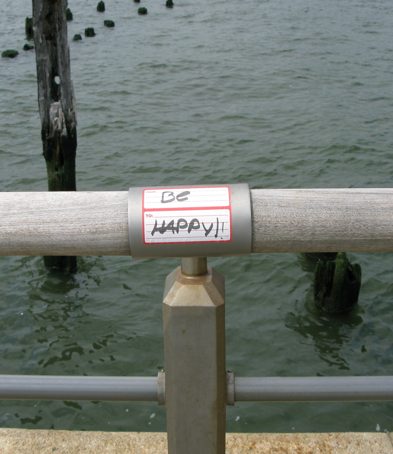 Someone left these words on the railing along the Hudson.

I was reading about this artist who decided to pull the plug on a 9/11 artwork that had been getting some negative attention.  I didn’t see anything offensive about his piece, but that’s beside the point really. He and the gallery should be able to create and display whatever they want.  And they can.

But freedom doesn’t guarantee love and acceptance, and people who don’t love your art are equally free to say so.  My first response to him pulling the plug was “what a baby.” Not that I wasn’t sympathetic to being disheartened by a lot of hate coming your way.  It’s completely debilitating.  But this goes with the territory of putting your work out there.

I read his reasons for pulling the plug and I gotta say, the guy sounds like a bit of a tool.  Here’s his statement:  “After three days of a steady downward spiral in public discussion of the piece, I have just given my agreement to the organizers of the Leipzig Games Convention to simply turn off the installation Invaders! While I realize the dangerous precedent of allowing the lowest common denominator dictate what is and is not a valid form of expression, unfortunately the current tone has totally obfuscated the original aims of the piece. While I take full responsibility for the uncomfortable ambiguity of certain aspects of this work, it was never created to merely provoke controversy for controversy’s sake, and unfortunately, this is what the piece has now become. The American response to this work has been, frankly, immature, and lacking the sophistication and consideration that other parts of the world have so far shown the work. Contrary to previous reports, I am an American, and it saddens me that we as a people remain so profoundly unable to process this event outside of some obscure, but tacitly understood, criteria of purely anesthetized artistic representation. Due to these profound misunderstandings, I simply feel that from an artistic point of view, the work has lost the ability to have any valuable impact, poetic or otherwise. I have not been pressured by the Leipziger Messe, nor by the Computerspiele Museum in this decision — to the contrary, they have offered their support in defending the right of artists to speak freely, and in whatever context they may choose.”

Please.  Where to even begin? How unsophisticated is he to not know the piece would get this reaction from some people.  In fact, I’m not buying that this was a surprise.  And yes, all of America feels as one.  I went to his blog though and read some of the comments he’s getting.  Who are these people??  You have to go and see them here.  Just read a few.  I still think the guy might be a tool, and his decision to pull the plug insupportable, but really.  What’s the most disheartening, aside from the hostility is the sheer stupidity of the comments. 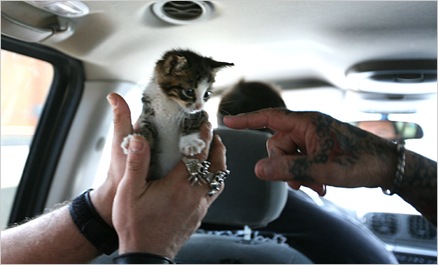 I was all depressed at the ugliness and stupidity and then I saw this picture in the New York Times.  It was from an article about a biker group called Rescue Ink that rescues animals.

Look at that picture. So okay, there are a lot of ugly Americans, but some of us are pretty.  You can read the article here, and see a video of them at work here [the video I linked to has been taken down].

The Most Beautiful Abandoned Lot in NYC

Virus and the City: Fashion

2 thoughts on “I Love People, Then Not So Much, Then I Love Them Again”