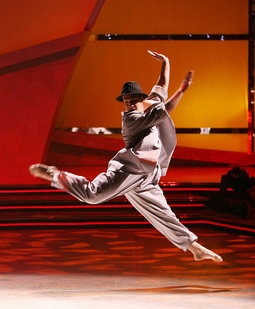 The consensus seems to be that Jeanine is going to win and I think that’s right. The only upset might be Evan.  I know I’m not the first to point this out, but the judges were just so relentless about Evan not being as good as anyone else that people might rally around him, the way they did last night when they started chanting for him.

But here’s what I want to say about it: I was glad the audience starting chanting for Evan, because the judges did go over-board. I know he’s not the best, but I enjoy the guy, I love watching him dance, and he’s not as bad as they say.

For instance, the way they critiqued his routine with Brandon, that whole nasty thing. When their routine started I thoroughly expected Brandon to wipe the floor with Evan. I figured it would be like Evan wasn’t even there. But the opposite happened. I watched Evan throughout. The few times I watched Brandon I noticed that technically he was doing some things better, but it wasn’t enough for me to want to keep watching him. I kept going back to Evan, who even though he wasn’t dancing it as well, he was still dancing it well nonetheless, and he had something else that Brandon didn’t, so it didn’t matter that technically Brandon was doing something better. The sum of all the parts that make up a performance favored Evan for me.

Here’s my main point: the judges keep wanting to downplay whatever it is that Evan has, like it’s not important and it ends up not only feeling like an insult to Evan but an insult to me and the rest of the audience. Like they know what’s best for me to enjoy.  I actually am loving the dance education I’m getting from this show, but apparently the judges are missing something that we’re seeing.  (My only critique to Evan would be to be less “aw shucks” all the time. Own it.)

Any way, so even though in the end I want to favor the best dancer, between Evan’s I don’t know what to call it, his ineffable something, and the judges relentless harping on him, it made me want to pick up the phone for Evan.

That would be the threat to Jeanine winning.  But in the end I think the audience will reward the work she’s done.  That solo was amazing.  Although for me, Kayla and Brandon were the best dancers.  Technically.

This Week It’s All About the Music

How to Be a Rock Critic