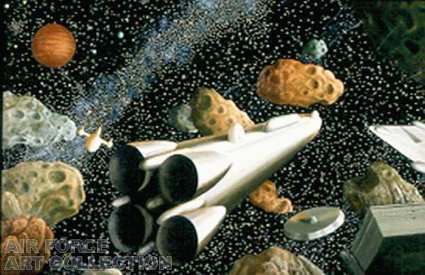 This was painted by Raymond Bayless, a parapsychologist I wrote about in my book. Here’s the description of the painting, which is owned by the United States Air Force.

“Scene In The Asteroid Left Showing Trapped Inter Stellar Ships Caught In Web Like Structures Woven By An Version Of Other Dimensioned Spider Like Beings. An Air Force Vessel Is Counter Attacking.”

I love this sad painting. 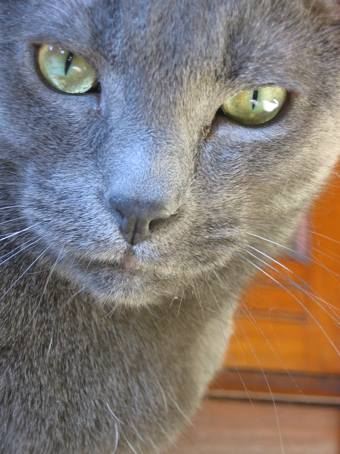 The question I just put to Buddy: Who is the most magnificent cat of all time?? His answer: [He left the room. I have no idea how to interpret that. He’s bored?] Look at the gorgeousness of him, though. I mean come on.

I saw Children of Men yesterday. I must say, I love a good end-of-the-world movie. Worse, I think people would behave this badly. Even though I genuinely believe in the good of many, I can’t deny the bad. Still, I’m glad the movie ended on a hopeful note. I don’t think I could have taken it otherwise.

Except … you know how in the movies when bad things are about to happen they always want to keep the news from getting out in order to avoid a panic? Well, look at 9/11. That first day, for all we knew anything could happen next. An even bigger attack could follow. But no one panicked. Instead, they rallied. They pulled it together and did what had to be done, and behaved decently.

Ah yes, another picture! Who is abducting them??

I woke up yesterday to mouse carnage. Suddenly, this toy is not so cute anymore. I hate the mouse-killing thing because I love mice. Usually I rescue the mouse before any damage is done, and take it outside. But apparently I slept through this one, which is hard the fathom. Books and papers everywhere, the house looked like WWIII. Very sad. And you know how they torture them.

Anyway. A couple of things. If, like me, you are sometimes embarrassed by your lack of education or knowledge, I found a great website called Three Quarks Daily. Howard had to explain to me what the name meant and I’ve already forgotten. It’s a literary reference. They post interesting articles about interesting things and God, if you took the word “interesting” away from me, I’d be left speechless.

The other day they had a great post titled, Shia and Sunni, A Ludicrously Short Primer, which delivered exactly that, and was interesting (intriguing? engaging? sucks you in? the opposite of boring?) and said something nice about us at the end.

The other thing is Molly Ivins. Someone showed me a tribute about her in the Times. I was just so blown away by what the writer pointed out that I have to share it. I hope I don’t get in trouble with the Times. But look at what she said and when she said it. We’ve lost a freaking national treasure.

Molly never lost sight of two eternal truths: rulers lie, and the times when people are most afraid to challenge authority are also the times when it’s most important to do just that. And the fact that she remembered these truths explains something I haven’t seen pointed out in any of the tributes: her extraordinary prescience on the central political issue of our time.

I’ve been going through Molly’s columns from 2002 and 2003, the period when most of the wise men of the press cheered as Our Leader took us to war on false pretenses, then dismissed as ”Bush haters” anyone who complained about the absence of W.M.D. or warned that the victory celebrations were premature. Here are a few selections:

Nov. 19, 2002: ”The greatest risk for us in invading Iraq is probably not war itself, so much as: What happens after we win? There is a batty degree of triumphalism loose in this country right now.”

Jan. 16, 2003: ”I assume we can defeat Hussein without great cost to our side (God forgive me if that is hubris). The problem is what happens after we win. The country is 20 percent Kurd, 20 percent Sunni and 60 percent Shiite. Can you say, ‘Horrible three-way civil war?’ ”

It just made me think, I’m sorry I didn’t speak up more before, but that stops now.

I want Al Gore to run again (a do-over!) and wouldn’t it be kinda perfect if Hillary was his running mate? But I don’t see that working so Barack Obama, who would be president after Gore serves two terms. 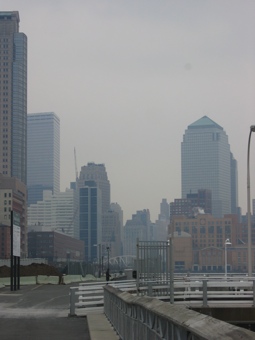 This is what I see when I walk downtown along the Hudson River. The World Trade Center used to be in there somewhere, but for the life of me, I cannot remember just where the towers stood. If you look at the tallest building on the left, the next tallest building immediately to the right of that is the first new building on the site, so somewhere near there.

I shot this today, while walking downtown to see Catch and Release, which was so sweet. I recommend it for a nice escape. Except I wanted Kevin Smith to get the girl. He’s so cute and charming. Who can not love Kevin Smith, I ask you?? Only someone really messed up, I say.

I was going to stay and also see Children of Men, but the movie times listed online were wrong, and I didn’t want to wait an hour. So, I’m back home, and maybe I will now work. Except, Howard has my next chapter and he said such great things about it I’m on cloud 9.

Maybe I will wallow on cloud 9 for a while. 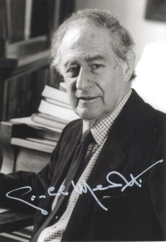 I was just talking in December about the fact that Gian-Carlo Menotti was still alive, and sadly, he died today. Sigh.

I’ve got an opera of his on my wish list on Amazon. It’s called The Medium. From the Times, today: “The Medium, written in 1946, ran for 211 performances on Broadway the next year with another Menotti piece, The Telephone. The Medium was a compendium of the Menotti style — delicate orchestration, lyric writing and often a melodramatic theatricality.

Menotti was 95. I quoted Upton Sinclair’s wife in my book yesterday. It was something she said at the end of her life. “I look out across the world and it is peopled with strangers!” I was thinking, I wonder if Menotti had thoughts like this. But maybe not. He knew so many people. And he loved children. Maybe his world wasn’t filled with strangers at the end, but lots of friends.