It’s that time again! Like every year, I will be drumming in the Halloween Parade with the Manhattan Samba Group. This is us last year, and that’s my friend Ellen kissing my friend Ronnie. I’m going to try to remember to take a picture from inside the parade, marching down 6th Avenue, but I always forget. Which is a good thing really, because it means I am having too much fun drumming. A couple of the cold case detectives are going to be working at the parade again this year, but I have never once spotted them. Maybe this year will be the year! They look so cute in their uniforms.

(Which reminds me, the New York Magazine piece is in next week’s issue.)

There’s an article this week in New York Magazine about the Cold Case Squad! It’s called, Stiffed: How the NYPD’s elite Cold Case Squad, which investigates long-unsolved crimes, is falling victim to a slow bureaucratic death, and it was written by Janelle Nanos.

I’m happy about this article. I think it’s important to try to solve these murders. This picture was taken at the Property Clerk Warehouse. Those are called DNA or Blood Barrels, and they are full of homicide evidence. Each barrel represents 20 to 25 unsolved murders.

The article ends with a quote from, John Diefenbach, whose 14-year-old daughter was murdered in 1988. Her murder is still not solved. He says hope is all they have. If the squad goes away, all he will have is despair. The following is a snippet from my book. I’m writing about waiting for a new lead in a case. The 8,894 refers to the number of unsolved murders in the police department’s database, and “filler 5’s” refers to DD5’s, the name of the form they use to write up what they’re doing on a case. A “filler 5” means they’re really not doing anything, but they have to put somethhing down on paper.

“There doesn’t seem to be any part of the whole process that isn’t about disappointment … And so the detectives wait. Tommy Wray waits. John Diefenbach waits. The families of the 8,894 wait. Almost all of them will wait forever. Most cases will remain cold and unsolved until the very last member of the immediate family is dead, and all the detectives retire and new detectives stop writing filler 5’s, and the cases are put away for good, until the next precinct move, when they will finally be lost forever.” 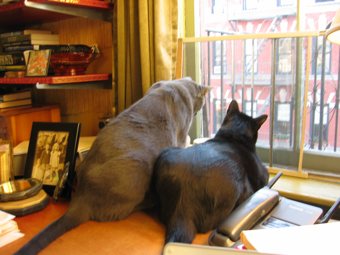 Buddy: Dude, you see that?
Finney: It’s so close.
Buddy: I can almost taste it.
Finney: Someday …

Lately I’m seeing birds that I worry are escaped house pets who won’t survive. Yesterday, this pretty little bird with yellow in it flew into my window twice. What if it’s a poor, freaked out, escaped house pet? Just now, an even teenier bird, with red in it, and the prettiest tweet, sat for a while on my fire escape. I’ve considered many times getting bird feeders, but every time I’ve decided against it. It would just be torturing my cats. 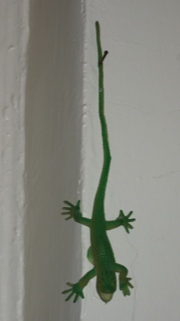 I stuck this plastic lizard-y thing up on my bathroom wall decades ago, because I thought it was fun. It’s still there. It will be there until the day I die, I bet. I find change very difficult, is what I’m saying. But exciting sometimes.

Today I’m going to an extra choir rehearsal. I’m a little nervous about it because it’s pouring rain, which means few people will show, which means someone might actually hear me sing. Ack. (I prefer to blend and be invisible, vocally speaking.) I’ve been singing with this choir for about 25 years. This is not really a change issue. Singing is fun.

Then, I’m going to a halloween party where I will go as a cold case cop, the same thing I went as last year. This is also not a change issue. I think it’s a lack-of-creativity issue. I can’t figure out another costume from what I’ve got to work with here. The cop costume isn’t bad, except I get nervous walking over to my friend’s house. I’m afraid a cop-hater will hit me.

Who watched “It’s the Great Pumpkin, Charlie Brown” last night? I love to wallow in nostalgia. 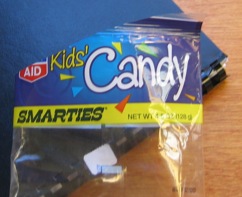 Smarties are my favorite candy. Please notice how it says “Kids’ Candy” on the bag. Hello? I don’t think so. MINES. Besides, why would they want to cut off part of their market like that??

Yesterday I went to the library, had lunch with friends, went to acupunture and then choir practice. A packed day of information, good company and food, relaxation and music. My mood is much improved.

Plus, all the ridiculous stereotypes aside, Studio 60 got better this week, didn’t it?