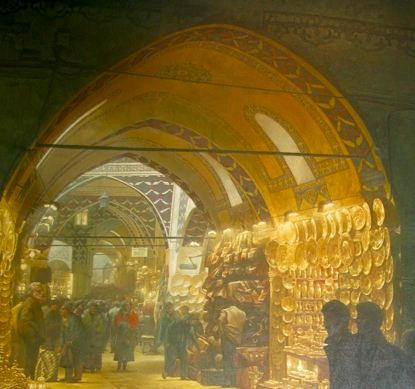 Yesterday, while doing the WTC tour I noticed a bunch of paintings on the walls in the American Express building and I wondered if these were Craig McPherson’s, the guy I posted about earlier in the year (he did some drawings of me in my younger days). Sure enough, they were! “I know this guy! I know this guy!” I start saying to everyone there.  They all smiled and admired his work.

This is just small detail, it was hard to get a good shot.  The colors are probably only approximations.

I’m in for the night.  I’m going to curl up with this really fun young adult book my friend Kevin sent me—The Graveyard Book by Neil Gaiman. 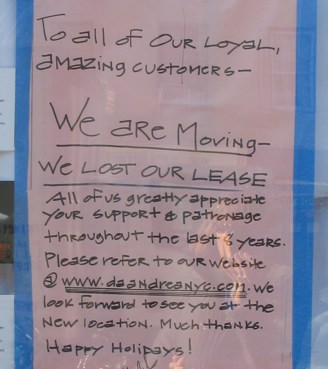 This is how to win a war—ruin the sleep of an entire country for a full week straight.  No one will be able to function. They will surrender immediately rather than suffer another week like that. I slept last night but that’s because I had a few nights of barely sleeping and I was like a dead woman.

Signs like this one to the left keep relentlessly going up in my neighborhood. I’m sure this business will be replaced by yet another place I can’t afford to shop in (or eat at). At least this one is moving and not closing altogether. As someone who started a business I can tell you that you lovingly put everything you have into them, it becomes the beating heart of your daily life. Whenever someone criticized Echo, it was like they had criticized my child, and I always wanted to dress them down for it.  It was insane. I always get choked up at the part in A Christmas Carol when Fezziwig watches from a carriage as they take down the sign for his business and replace it with the Scrooge and Marley’s.  I know exactly how his heart is breaking. 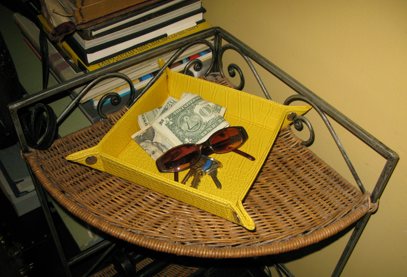 That title reminds me of a picture someone took of me at my first job after college. I was working as a photographer at the Harvard Smithsonian Center for Astrophysics and I couldn’t have been more proud.  I’m still proud thirty years later.  I wrote on it, “Look Ma, I’m working!” and mailed it to my mother.  I should dig it up.

I managed to get past my enertia, and now I’m getting some work done. Not at this moment though. Right at this moment I’m goofing off and blogging, obviously. This is a picture of one my Christmas gifts, which is the most perfect shade of yellow. (Thank you, Karen, Peter, Chris and Nicole.) 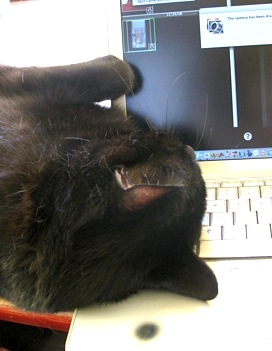 We just can’t get cracking yet over here. Although I have been to the gym. Only to find that I have gained weight, I don’t see how that’s possible, wtf squared.  No, wtf to the infinity power.

I downloaded the movie version of A Tree Grows in Brooklyn and that’s all I want to do, but I must start this article I’ve been assigned.  It’s a fun one, and no reason not to get started, but tv beckons.  Plus, Finney just moved to my lap.

Hey, I recently learned that the current Pope brought Hell back. This one is proclaiming Hell real. Thanks a heap, Pope.  Also, did you read that headline where he said homosexuality was as bad as … I forget what now.  I just looked.  As bad as the destruction of the rain forests.

Oh, and did you read about the guy who repeated the Milgram experiments and got the same results? I swear to god I was just thinking about this, because I’m getting some heat for questioning some generally accepted wisdom on another issue (alcoholism).  Nothing wrong with questioning I say.

West Wing: Noel.  This is the best of them all, my personal favorite, it’s the one where Leo tells the story to Josh that begins, “A man falls into a hole …”

Bones:  The Man in the Fallout Shelter, this is the one where they are all quarantined in the lab over Christmas.

Buffy the Vampire Slayer:  Amends.  The one where it snows at the end.

Roswell:  A Roswell Christmas Carol.  This is the one where Max heals all the children at the hospital. 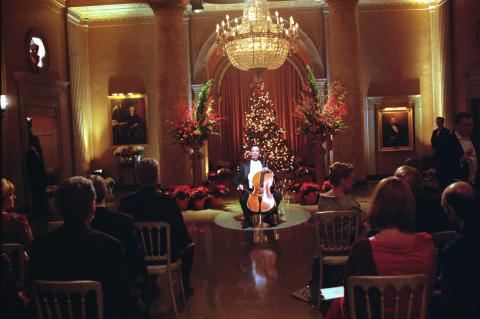