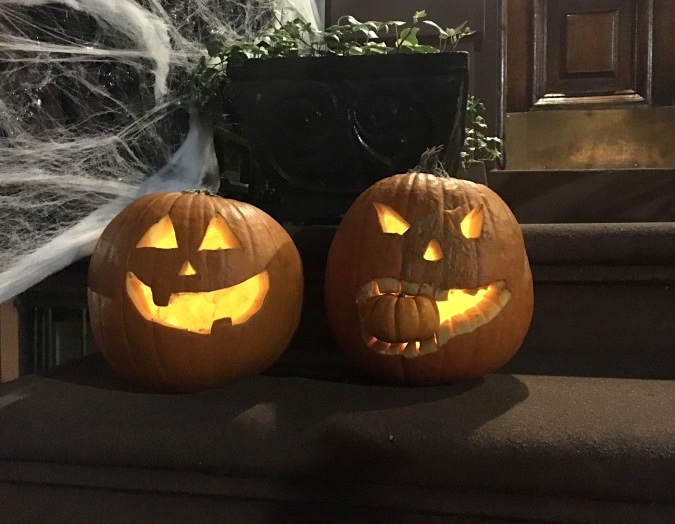 This building went all out last year and again this year. I saw the guy who put this together and I thanked him. Where did he find dolls with this expression?? 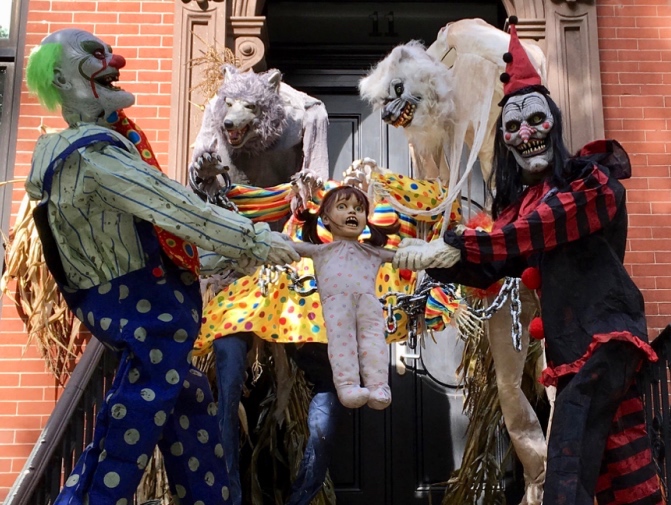 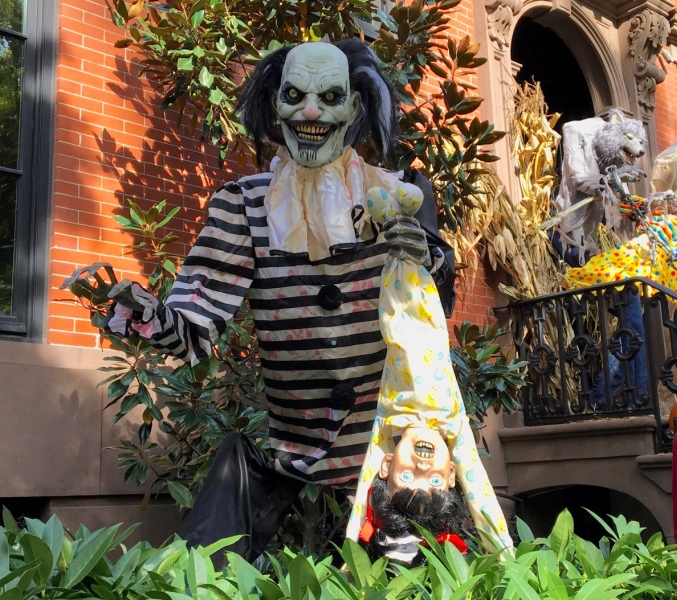 I returned my foster kitten to the ASPCA yesterday so he can get neutered and put up for adoption. It was awful. I want so badly to adopt him. But I already have three cats in a small New York City apartment, and my cats were not happy while he was here. That might have changed eventually, because they went from hating him to putting up with him, so maybe it would have evolved to love one day. But this morning they’re moving about the apartment instead of spending all day in the bedroom, and life is good for them again.

The problem is, since my cats didn’t want anything to do with him at first, he spent all his time with me, and he and I bonded. I absolutely adore him. I got him through his fear of toys, and my floor is covered right now with ping pong balls and bottle caps from Half & Half containers—his favorite—and I don’t want to clean everything up. I sobbed while washing out his litterbox for the last time. Yes, I’m insane. I KNOW. But what can I say? How many never-fail sources of happiness are there in the world and he made me happy all the time.

Three cats is already too many, alas. And it just doesn’t seem right to make my three guys miserable and to deprive the little guy at a chance in a home with another cat who actually likes him. Keeping him is the best thing for me, but not for him (I think, who knows??) or my cats.

But my heart is completely broken. It doesn’t mean I don’t love the others and I’d feel the same way if any one of them went away, but even though my apartment is essentially full of cats, it feels empty. His name was Quiche, but I called him Q. Goodbye little Q. I will love you forever.

A window box in the West Village. 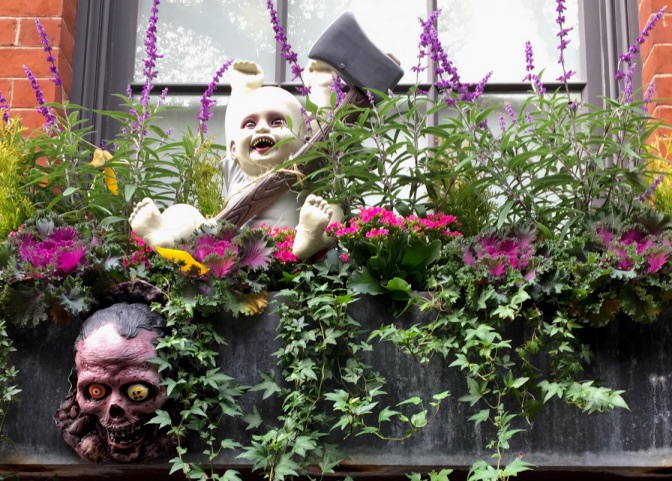 Now I have a tuxedo boy who will be available next week. (Backstory: I’ve started fostering kittens for the ASPCA.) He’s a single guy and he follows me everywhere. When not playing he’s on my lap. If I call him, he doesn’t just come, he runs to me, full speed ahead, it’s the cutest thing in the world. Just the sound of it is adorable. I’ll call out his name and seconds later I hear the sound of tiny galloping feet running towards me.

I’m not allowed to post pictures so this is just a shot of his whiskers. You wouldn’t be able to pick him out in a line-up, so I think this is okay.

If you have any interest email me and I can send pictures where you can really see him.

I passed by this pigeon silhouette on my way upstairs at the gym. He looks like a tiny turkey. 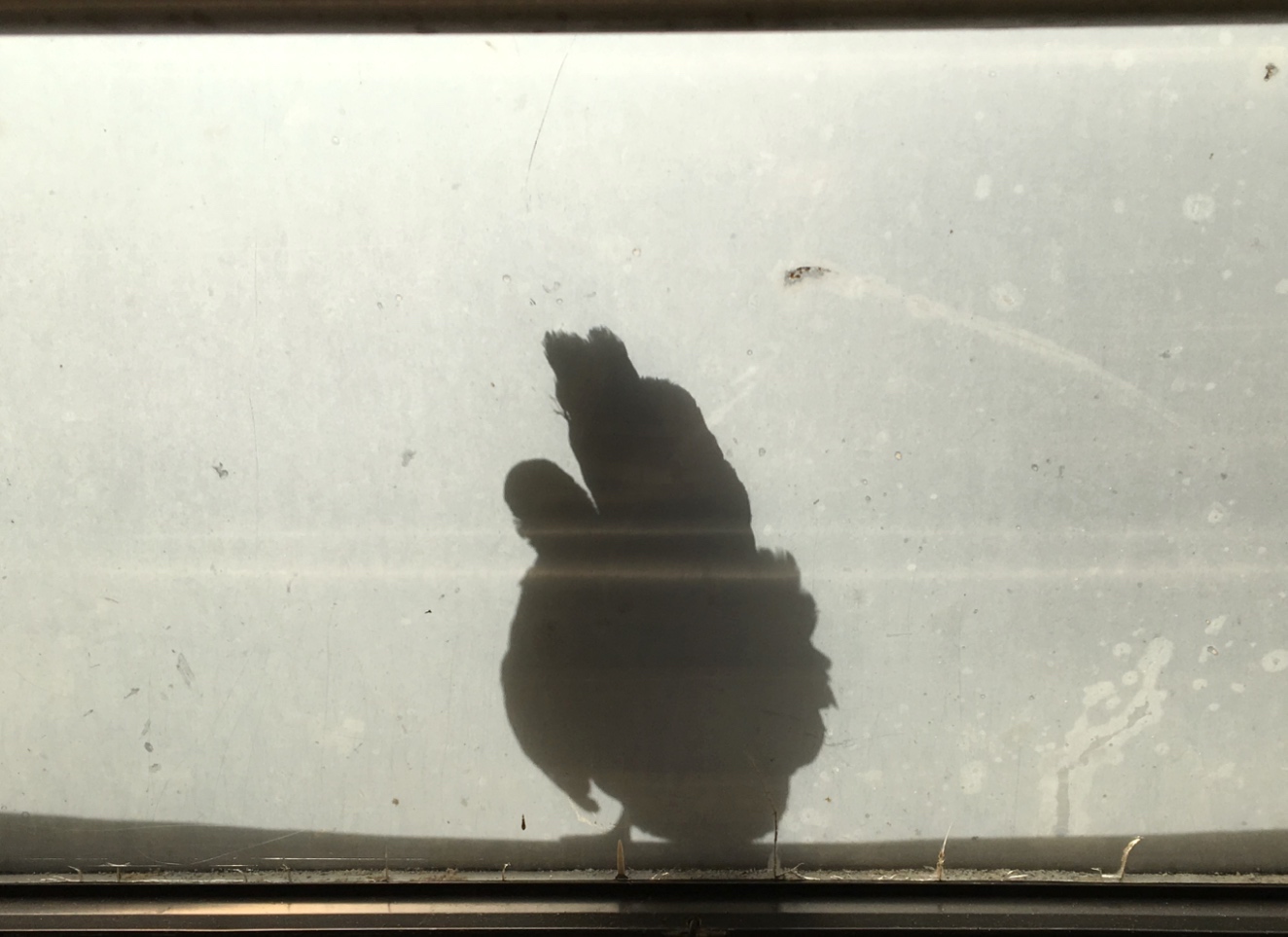