Update: 6:10: He hated the bird baby food, but it awakened his appetite and he ate the regular bird food he initially scorned. Plus I got a lot more water in him via syringe. So yay! Haven’t heard back from the pigeon rescue group, but it is Sunday. And I’m heartened by his appetite. He was so uninterested at first. It has to be a good sign.

Update 2:50: I called my vet and the tech explained how to feed a pigeon with a syringe. I just successfully fed some water to the pigeon! Made me ridiculously happy. Will try baby food later.

I headed out to go kayaking, and saw this sick pigeon in front of my building. I went back up and got water and food for it, but ultimately I couldn’t just leave it there. It didn’t even move when I put the water and food down next to it … 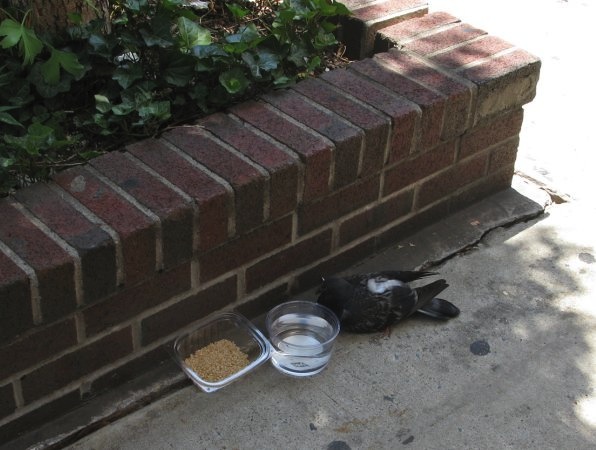 … so I got a box and brought it upstairs, called and emailed the New York City Pigeon Rescue people and read these instructions for How to Care for Lost Pigeons by Frank Mosca … 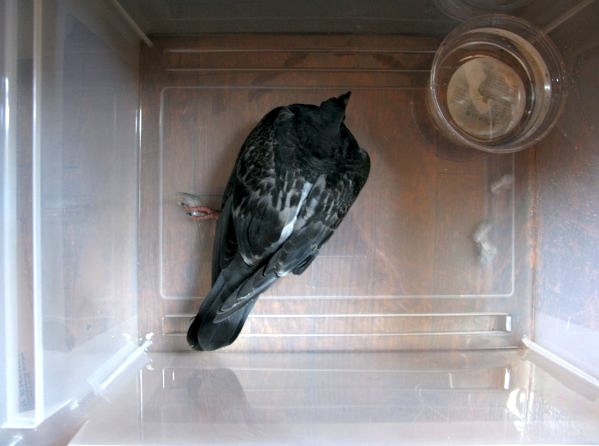 … but he didn’t drink, even though I tried the trick Frank suggested. I fear he might be too far gone. His leg is very unnaturally splayed as you can see in this picture. When I picked him up he barely resisted. Poor little thing. Now I’m home worrying and waiting to hear back from someone. Seriously, I wish I wasn’t the way I am, but I couldn’t just leave him. 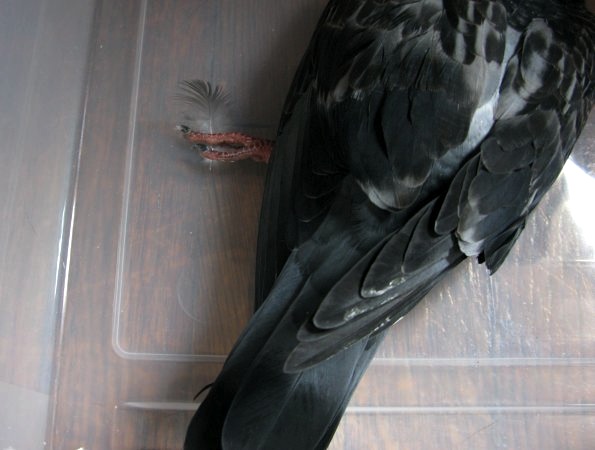 The exercises the vet suggested for my cat weren’t working out so came up with some of my own. I’ll try to make a video of them later today so I can show my vet and others with arthritic cats.
—

At first I thought this creepy zombie guy was some sort of modern scarecrow, except what crops is he protecting? This was out on Long Island, I took it the day I went kayaking. 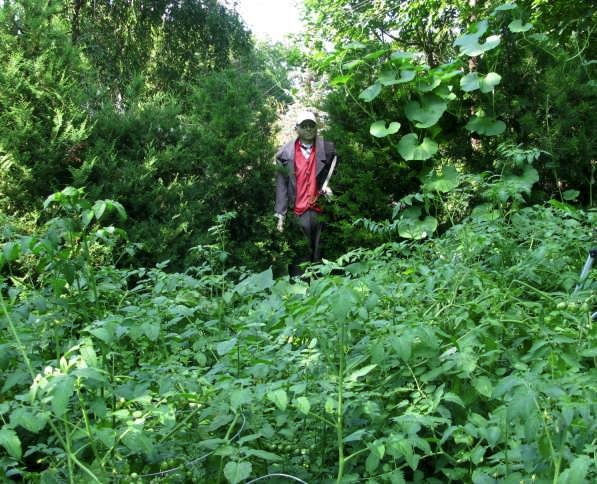 It will come as a surprise to no one that Finney didn’t want to do any exercises involving his back legs. Later I remembered that he will happily follow a laser pointer light up a wall, so today I’m going to see how long I can get him to stay up on his hind legs going after a laser light.

It’s been a productive today so far. I just sent off a bunch of chapters to my friend Howard—tomorrow I will start the final two chapters of my book! I still have a bunch of editing to do on all the previous chapters, and only a month do it, and I’m not even sure how I’m going to fix the problems already pointed out, but still. Today I do not suck. Oh God, I just freaked myself out thinking of all I have yet to do. I can’t think about that.

Thinking about … kittens. Here’s a basket, Buddy, and a banjo. 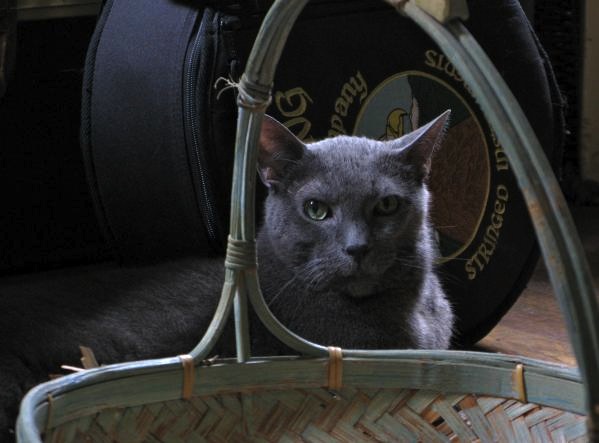 Finnegan got his first low level cold laser treatment yesterday. I worked out a treatment plan that went from $163 each time I bring him in to $42, but the cabs both ways come to $36 or $40 because the vet is in a public transportation dead zone, and yes I know it’s still a lot lower overall, but, well, damnit! Next, I have to start exercising him. I will pause while all the cat owners recover from the spasms of laughter. The three suggested exercises are:

Dancing. In this one you pick up the front legs and force him to audition for So You Think You Can Dance.

Beg to Stand. Then you force the cat to stand up and beg to be one of the final twelve. Treats are involved.

Loving on the Stairs/Couch. It’s not what you think!! “While sitting on the stairs or on the couch, have the cat’s back legs on the floor and lift the front legs up a step or two or up on the couch cushion in front of you and pet them as they stand this way for 30 – 60 seconds.” Or as I put it, this is where you gently tell them they will not be one of the final twelve.

FYI: I also have Finney on glucosamine (brand name Cosequin) and something called Metacam for the pain. Metacam can have nasty side effects so you need to monitor your cat for a while if you decide to try this.

I took this picture on Bleecker Street after the vet. Yes, I put Finney down on the street and made him wait for peace and freedom while I took the shot. Someone is working on a very busy display. 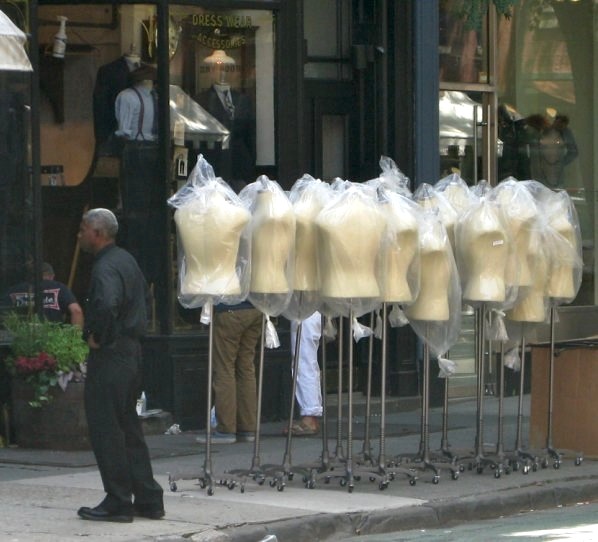 It was a little too much about Lady Gaga for me, but Lady Gaga, when she commented on the dancing, was so gracious and kind, and her comments were good and useful, although it was obvious Caitlynn did not understand what she was trying to tell her. When I think about it, Lady Gaga’s comments were some of the best critiques I’ve heard from a guest judge.

I watched Tadd and Lauren’s routine twice, loved seeing Ivan again who was phenomenal, (I loved seeing all the all-stars, especially Pasha as always, and Ade), and Sasha is still my favorite, with Melanie close behind her.

My friend Kim moves to New Zealand, buys a house with some land and some olive trees, and I get olive oil from New Zealand!! I can’t wait to try it, thank you Kim!! It’s very exciting, like personalized olive oil. 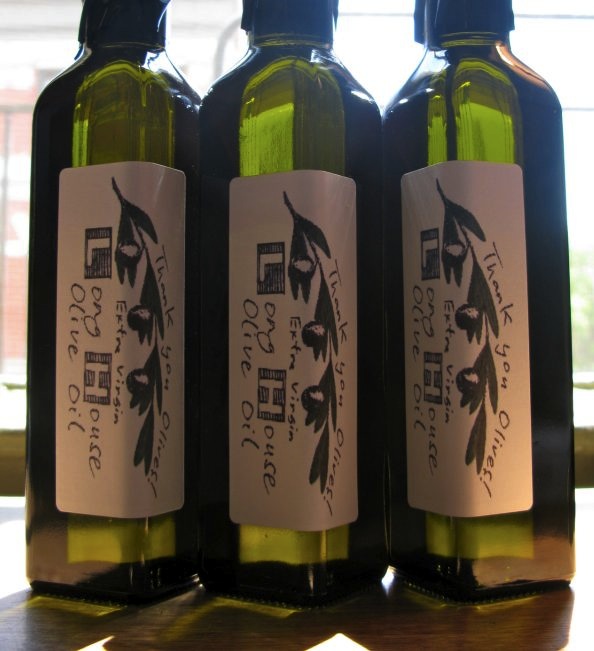