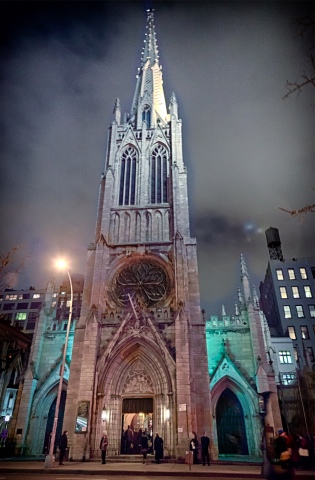 I spent some time researching the early congregants of Grace Church in New York City (where my choir, the Choral Society of Grace Church, sings) looking for good stories. Some of the pews in the church have plaques with names of the people who once owned them, (they bought pews in those days) and these former owners turned out to be a virtual who’s-who of New York society at one time.

There’s a Schermerhorn pew, #106. It’s right in front, next to the rector’s pew, essentially the best buy-able pew in the house. Abraham Schermerhorn snapped it up for $800 in 1846, (about $20,000 in today’s dollars) and that’s when I learned that Caroline Webster Schermerhorn, who went on to become the famous The Mrs. Astor, was a congregant here when she was a girl. For those who don’t know, Caroline Astor ruled New York society in the 19th century. (Read The Age of Innocence, by Edith Wharton. Wharton’s grandmother, Elizabeth Jones, had a pew at Grace Church.) For some reason I had a hard time finding out for sure exactly what day Caroline was married and where.

They were kind enough to open the safe for me at Grace Church and here is the entry I found in one of the record books inside:

William Astor, of New York, Gentleman, aged 25 Years and Caroline Webster Schermerhorn of New York, Spinster, aged 23 Years, were married by me at Grace Church this the 20 day of September 1853. 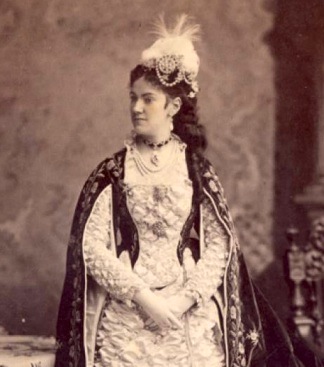 I guess “me” would have been Rev. Thomas House Taylor, the rector at the time. Anyway, I thought I would put this out there in case someone else comes along looking for this information and, like me, has trouble finding it.

Here is Mrs. Astor. It looks like she didn’t worship at Grace Church as an adult, however, at least not as far as I can tell. Perhaps because they moved uptown. It’s amazing how important your place in the New York aristocracy was, and I guess still is. But in one of the books I used to research the history of the Church and the neighborhood, Grace Church and Old New York, by William Rhinelander Stewart, he lists every important person who lived in the neighborhood at the time, and exactly where. Basically everyone who was anyone. It was written around the same time as The Age on Innocence.

Abraham Schermerhorn left his pew to his children when he died and I found a record at Grace Church showing that Caroline Astor gave her share of the pew back to Grace Church. A battle about owning and also renting pews waged for decades and the practice finally ended in 1961. “… this is God’s house, any person should be free to enter it and sit wherever he might choose.”

Update: I found this great description in The Age of Innocence of the chancel steps I climb for every performance.

“Overhead, Handel’s March swelled pompously through the imitation stone vaulting, carrying on its waves the faded drift of the many wedding at which, with cheerful indifference, he had stood on the same chancel step watching other brides float up the nave toward other bridegrooms.”

The stone in the Church is imitation! It’s actually plaster, which has been known to rain down on us sometimes while we sing (they’re undergoing renovations). But what an incredible sentence. I, of course, have a different feeling whenever I stand on a chancel step. I’m closer to every other bride who has ever floated up there.

The amazing, supernaturally beautiful picture of Grace Church was taken by David Jelinek.

In the description the owner describes it as “slightly haunted.” What he writes is hysterical:

“Nothing serious … The sounds of phantom footsteps. A strange knocking sound followed by a very quiet (hardly noticeable, even) scream at 3:13am, maybe once a week. Twice a week, tops. And the occasional ghastly visage lurking behind you in the bathroom mirror. Even still, this occurs very rarely and only in the second floor bathroom.”

I wonder how far away it is? According to Google it’s 2 1/2 hours away if I drove, which I wouldn’t. But that gives me some idea, that’s not terribly far. Except, he’s probably joking, isn’t he?

A writer who set up shop in front of the New York Public Library on a cold, wet, day. 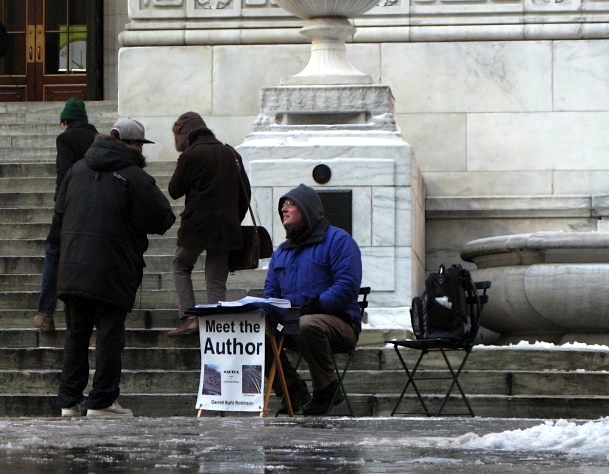 And a wonderful guilty-pleasure book I got for Christmas. The only thing that would make it more perfect was if I had grilled cheese and fries in the house. I’m going back to the couch so in the meantime I give you Violet Snow’s latest post about her search for her ancestors. (Which reminds me about this book I keep wanting to write about meeting various people before they die, mostly once famous, now mostly forgotten people.)

Also, please consider signing up for the new Realize Magazine. They gave my book a great review!

Bleeck discovers one of Finney’s favorite spots, the tv. It’s official, everyone in the house loves the tv, but for different reasons. 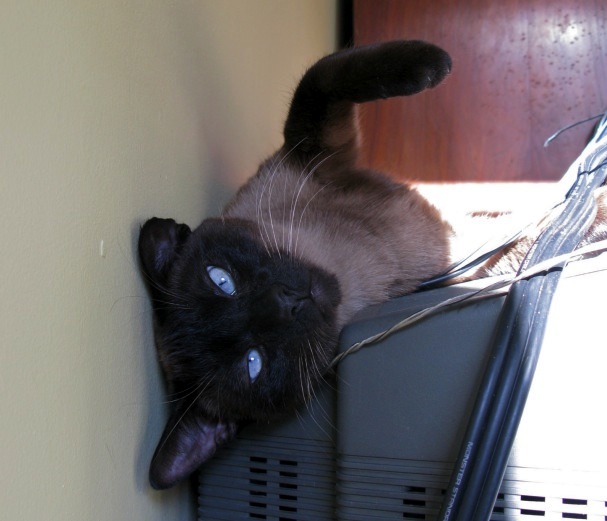 I just watched this brief video of a discussion between composer Nico Muhly and Ira Glass at the New York Public Library. Muhly is talking about his issue with traditional Christmas music and a piece he wrote to counter that. Watch it! It’s very short and you get an inside look at a very original piece of music.

We performed the piece he’s talking about last year for our holiday concert. The direction he gives the choir for the section he discusses is: “freely – do not coordinate with other singers – ecstatic.”

Each section has a note and every individual singer can do whatever they want with their note as long as it’s nothing like what the other singers around the singer are doing with their notes. Here’s what I wrote about the experience:

“It should sound like a mess, but it does this pulsating, expanding and contracting … thing.  It’s like a singing choir traveling through a bunch of different universes, and the sound warps and changes depending on the physics of the universe they are in at the time. It’s an incredible result for such a simple thing.  But why he does this is even better.  He wants us to represent a crowd of different ages, sizes, genders, backgrounds, all proclaiming Gloria in excelsis Deo (Glory to God in the highest) each in our own unique way … it it effectively moves from spookiness, mystery, tenderness, love, to exaltation.”

Bleecker sitting on a chair above Finney. You can just feel the inherent danger in this arrangement. That dangling paw … a swipe is imminent.

Happy holidays from me and the boys! Thank you for visiting with us throughout the year! 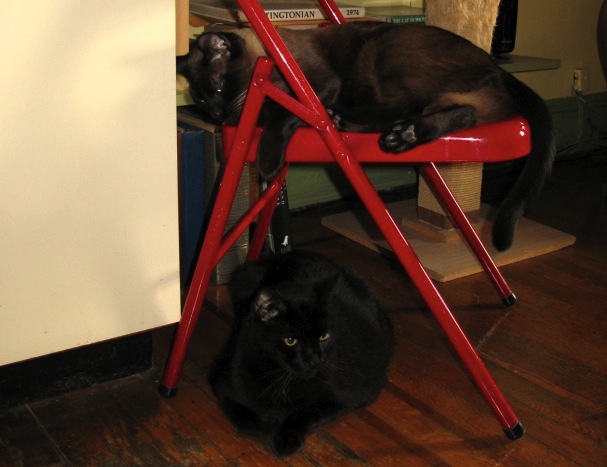 I looked for listings for all my favorite Christmas shows, and unfortunately, most of them are not airing. I could see a lot of them on Hulu or YouTube for $$$, but somehow that takes the fun out of it. I’m not sure why.

But I found enough to make me happy. I’ve already seen the Bones episode, The Santa in the Slush. The two Sports Night Christmas episodes are airing today!! (The Six Southern Gentlemen of Tennessee and The Reunion.) The Newsradio episode Xmas Story is on YouTube for free, and the Grey’s Anatomy episode, Grandma Got Run Over by a Reindeer, airs on January 6th (a post holiday treat).

I’ve got a holiday party to go to later tonight that I’m looking forward to. The hosts are two sisters who have lived in the Village forever—they grew up here, and one of them used to be my neighbor. In fact, another of my other former neighbors used to be one of their babysitters. They have a wonderful array of interesting, very likable friends and they asked me to bring music for singing! Oh yeah.

Tiny Christmas trees. These must be the tops of bigger trees, which makes me a little sad. Were entire trees sacrificed to make these desktop versions? Or maybe the trees were damaged and this was what they were able to salvage. 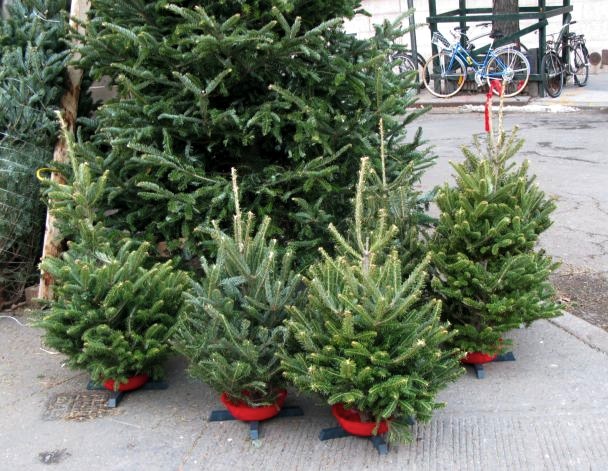