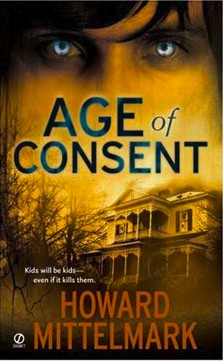 My friend Howard got a great review in the New York Post today. This is his first novel (he’s ghost written books for others). Horror books are not really my thing, but of course I read it and it was SO CREEPY. I wish you could hide your eyes in books when it gets to the really scary parts, the way you can at movies. It’s too bad horror doesn’t get reviewed more (unless you’re Steven King or one of a small select group). I’d love to hear more reviewers opinions about it. It’s fun to read what people write about your friends.

I’m in a very good mood today, because my agent responded to the chapters I sent. She didn’t like one, but I knew she wasn’t going to, so I was already prepared for that, and aside from making some editing suggestions, she loved the rest. My biggest, biggest fear was that I hadn’t delivered what my editor wanted. My editor wanted me to weave in material outside Duke, more ghost-y stuff. I didn’t want to do what so many other writers have done when faced with writing about parapsychology — trying to make it more than it is, and trying to make it scary. Basically, exaggerating. The truth is actually more interesting.

So, I wove in lots of strange events they looked into, which are absolutely fascinating in and of themselves without trying to make them anything more than what they are, and in the process of trying to tell the truth about what did and did not happen I found some really compelling information about apparitions (and other things). I don’t want to give it away. But when I asked my agent if she thought I had delivered what my editor wanted, because she agreed with my editor that this was needed, she answered, “Totally.”

The pictures below are from the pillow fight in Union Square on Sunday. I can’t believe how awful people can be sometimes, but then they go and do something like this. Gotta love ’em.

So, the Oscars. Pretty good, I thought. Most lovely: Gwyneth Paltrow, Helen Mirren, Jennifer Hudson, Reese Witherspoon. My acquaintence won an Oscar! It was mind blowing seeing him hug some of the most famous people in the world on his way up to accept it. Then hearing them thank HIM in their speeches. He’s living on a different planet now. (But yay, him! He was always nice, and there was something endearing about him.)

I noticed that Jennifer Hudson ran off the stage, leaving George Clooney trailing behind her. I woulda slowed down and let him catch up. “Hi George. One of the greatest nights of my life began with you calling my name …” No way. I would have been just like her. A little bit out of my mind and oblivious. 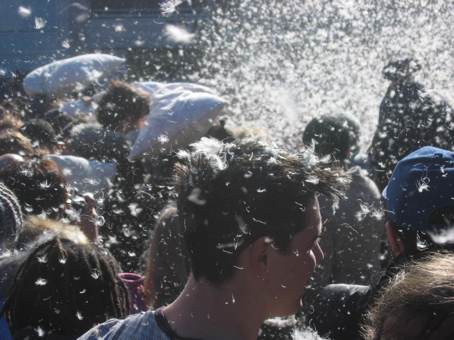 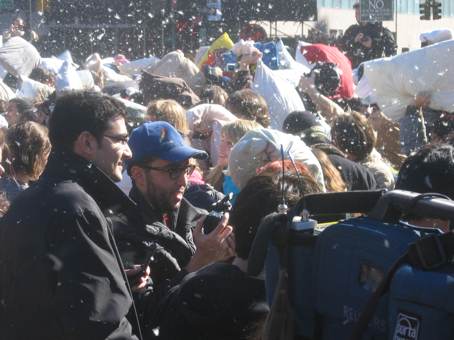 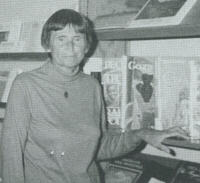 One of the people I interviewed a bunch of times for this book died yesterday. Her name was Rhea White.

This whole dying business really does suck. I just had a long conversation with her a few weeks ago and she sounded better than she had sounded any other time I talked to her. It put me in such a good mood. Normally it was hard for her to breath and she always had to struggle to answer my questions (she wanted to, I wasn’t brow beating her!). But this time her voice sounded so strong. There were none of the usual pauses while she caught her breath. We had fun talking!

I asked her about having lunch with Aldous Huxley in 1954. She panicked, it turns out. She was only 23! “I read all his books and I couldn’t think of a thing to say to him,” she said. Huxley was visiting the Lab, and the task of taking him to lunch fell to young Rhea, who had just started working there. Can you imagine?? Lucky her, though. The entire lunch wasn’t spent in panic, of course.

Quotes from her are all through my book. Rhea was great at describing what people are really like, the emotional truth. I spent one interview asking her to tell me about everyone in the Lab’s sense of humor. (I think it says a lot about a person.) She was also willing to gossip, which is so, so important when trying to get a feel for what people were like (good gossip, not malicious gossip). Even though I won’t be using much of that directly, it will help me humanize people I’ve never met.

Rhea got into parapsychology because she had a near death experience in 1952. She was in a car accident, and while she lie broken on the hood of a car she heard a voice that said, “nothing that ever lived could possibly die.” She was an English major at the time, but that was that. Life changed.

She’d come back to near death experiences in 1990. From the Parapsychology Association website: “But I soon realized that they could not be viewed properly without considering them along with all the other sorts of nonordinary and anomalous experiences people have. In a vision I saw the need to study all of them as a single class of experience, which I called ‘exceptional human experience.’ I have been pursuing this aim ever since.” (There’s a website.)

That sounds kinda stiff, but that was the precise scientist talking. She was much more vivid and funny on the phone with me (even when talking science). She’d describe J.B. peering over his glasses after Louie had just teased him in a staff meeting. J.B. could be a little stiff himself and his wife would sometimes have a little fun with him to the enormous pleasure of the rest of the staff. (It’s nice to be allowed to laugh at the boss sometimes.) Rhea was a great storyteller.

I had planned to talk to her about her study of exceptional human experience, and I know it would have been the best conversation, but now that is that. Rhea helped me know other people, but we never really got to her.

It turns out, Rhea was a cat person. Did I know that? She had a bunch of cats who are going to be taken care of at a place called Angels for Animal and she asked for memorial donations to be sent there. If you decide to donate, say it’s for the Rhea White Cat Fund.

Thank you for all your help Rhea. 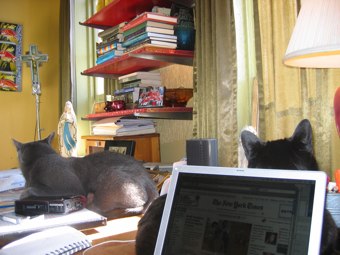 I sent my agent four finished chapters, so I’ve been taking a couple of days off. I read a fun book called The Book of the Dead, took care of errands I’ve been putting off, and today I think I’ll go to a pillow fight in Union Square. Not to participate, I think, but to watch. (I don’t have a pillow to sacrifice, plus, the idea of doing it makes me feel kinda shy.)

The main thing on my to-do list: DO NOT think about whether or not my agent is going to hate what I sent her. Personally, I love it. I don’t always love what I do, but I feel like I’m on a roll with this book. My editor wanted more ghost-y fun stuff, so I wove in stories about the child that the movie The Exorcist was based on, EVP, a great poltergeist story I found on LI, and other things. But in-between telling what I believe are incredible stories, I wove in the scientific point-of-view of the Lab. I think I successfully managed it so that the reader gets to have their cake and eat it too. A great story, but the truth of what really might have been happening is equally fascinating.

But, maybe my agent won’t agree. DO NOT THINK ABOUT THAT NOW.

Did I ever tell my lost galleys story? I brought the galleys of my book about the cops to the movies to show a friend before the movie started. (Galleys are when they put your book in an inexpensive bound form to show reviewers and others before the book comes out. It looks like a cheap paperback.) When I got home I realized I didn’t have the galleys with me.

I spent the day frantically looking for it, imagining all the worst case scenarios, like the one cop I was criticial of was at the movies and found it, and a lot worse (I have a good imagination). I was truly in a terrible state, I practically needed to be sedated. Months later I found the galleys in the closet in a bag along with catfood I bought that day.

I thought about how truly awful that day was when I worried, and it was all for nothing. I had completely ruined my day with worrying and it was for nothing. NOTHING. So now, whenever I worry about something that may or may not come true I say, “lost galleys, lost galleys, lost galleys.” Why lose a day for perhaps nothing? There will be plenty of time left to worry if the thing does, in fact, come true. (Which it probably will, because life is like that, but still!) 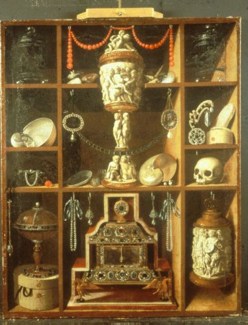 I’m sure most people already know, but just in case, that quote is from Lewis Carroll’s Alice’s Adventures in Wonderland, one of my favorite books. And this is a 1660’s painting of a cabinet of curiosity by Johann Georg Heinz.

I’d never even heard of cabinets of curiosities until I read this great escapist, but smart book by Douglas Preston and Lincoln Child called The Cabinet Of Curiosities. I might have mentioned these two before. I’m on the last book of a series that they wrote together. I’ve enjoyed them all, but I would only recommend The Cabinet Of Curiosities and another called Brimstone. But I would recommend them very very very highly.

Which reminds me, before I forget, I saw Pan’s Labyrinth. I didn’t really care for it! It’s the highest rated movie on Metacritic, but while there were some things I liked, it wasn’t complicated enough for me, and the fantasy elements weren’t convincing somehow. I don’t want to say much more and spoil it for anyone else.

Last, I have become completely obsessed with American Idol. I only just started watching a season or two ago, but man. What a fun obsession. Maybe I’ll post about it tomorrow. But if anyone knows a great American Idol blog, please tell me. I like this blog, Hold Your Applause. He writes about more than American Idol, but it’s worth checking out.