I have another interview for my audio forensics piece today. This is with a guy who analyzes cockpit voice recordings to help determine the cause of plane crashes. To prepare, I listened to a cockpit voice recording that I’m going to be asking him about. It was bad. I’ve listened to a bunch of these and I don’t think I’ve ever heard the impact in any of them, but you can hear it in this one. It made it a thousand times worse to listen to.

The conversation was hard to understand except at the end, but I read the transcript first so I knew what they were saying. The co-pilot was pointing out a problem and the pilot was insisting it was fine. It wasn’t. The last words are the co-pilot saying “we’re going down” and the pilot answering “I know it,” and I think you can hear the defensiveness and anger at the co-pilot in the pilot’s voice. It was like, ‘yeah, you were right, we’re going to die,’ like he was annoyed at the “I told you so” in the co-pilot’s comment, but also mad at himself and saying sorry at the same time. Jesus, I’ve led a charmed life so far. The things that some people have to endure. It’s so unfair. In the roll of the dice of lives, I’ve done pretty well so far.

I think I’m done with the line edits of my book, but I’m afraid to hand it in. (That sounded like school days, didn’t it? “Hand it in.” Like it’s a paper or an assignment.) What if it’s not really ready, and still needs work?? 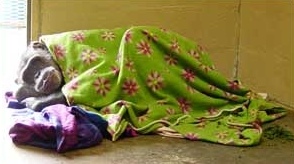 This is a picture of a chimp named Jaybee. I went to the Save the Chimps website and saw this picture. He’d been living in a windowless cage for years, while horrible things were done to him. “Upon taking over the Coluston Foundation in September 2002, Save the Chimps founder Carole Noon discovered Jaybee alone in a small cage making a “nest” out of leftover monkey chow, arranging the small biscuits in a circle around himself before lying down. Dr. Noon’s heart broke and she immediately got Jaybee a bed sheet. Jaybee was thrilled; it seemed that he had ceased expecting both kindness from humans and the most basic physical comforts. Jaybee made a nest with the sheet and having no reason to expect he would ever receive another one, refused to give it up for three days (he kept the sheet clean and dry).”

I mean for the love of God. I think it’s our job to take care of the creatures of the earth. If you can please donate to Save the Chimps. 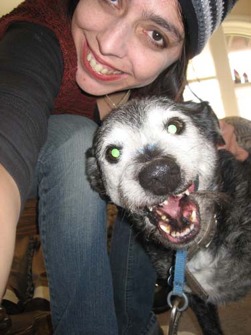 I’m posting this to show that I am not the only one who loves my pets even when they are evil. Here is Marianne with Schlomo, who is clearly possessed and about to chew her arm off, but does she care? No. She still loves him. Losing an arm is just the price of love.

Reasons to be Happy – the TV Version

“Bones will make six fresh segments and might get a supersized order for next season.” (I cut and pasted that from somewhere.)

Jon Stewart bringing Marketa Irglova back out at the Oscars and then her lovely speech.

American Idol is past the auditions and up to the good part.

Oh and the writer’s strike is over, of course.

Terminator: The Sarah Connor Chronicles, which was good to begin with, is getting even better. This show was out of left field for me and a nice surprise.

When it gets close to dinner time they hop up and keep me company, in case I forget. The time they start hovering gets earlier and earlier, and over the years I’ve broken down, to the point where “dinner” is now at 4:30. They get a snack at 7:30 because of course they can’t go without food from 4:30 until the next morning. I am so trained. 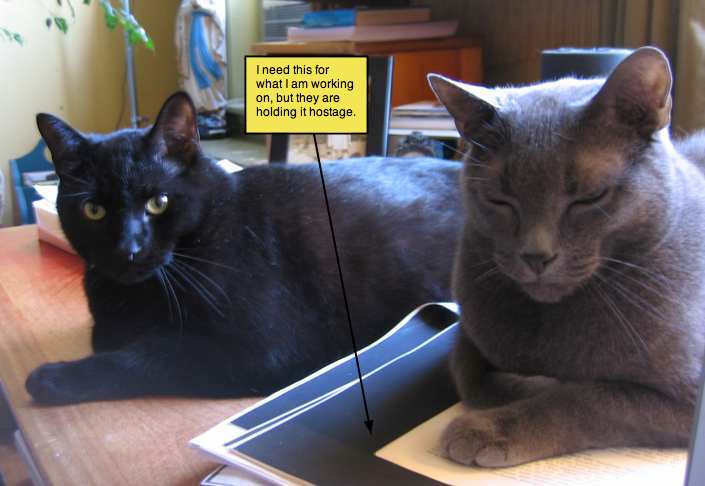 From left to right, first we have the happy couple, Christopher and Ellen, then Brad and Anne, and finally Marianne. Everyone always says ‘the bride looked gorgeous,’ except Ellen really did and here is proof. I mean come on, look at her. (I had the best dress after Ellen. Strangers came up to me to compliment the dress. I think it’s because 98% of the women wore black or some other dark color and the yellow just stood out. I was like a spring flower in winter.) 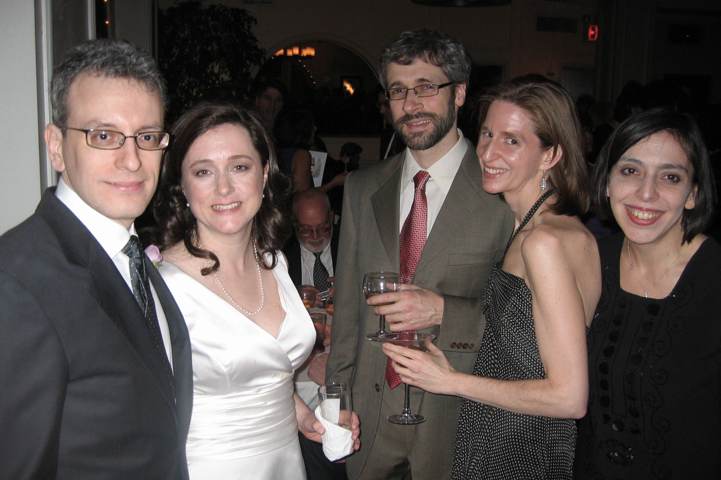