I had Echo problems AGAIN, with an assist from the place where Echo’s domain is registered (soon to be the former place where Echo’s name is registered). For whatever reason, any problem with Echo is enormously upsetting to me, and I just can’t relax. It’s like my child is in the hospital. The world won’t be okay again until my kid/Echo is okay.

Everything is back to normal except now I have a splitting headache. Still, it will be a most happy new year for me now. Echo is okay, my friends and family are okay, and my cats are okay. For now.

Looking up 5th Avenue, towards Central Park. It was a little dismal that day. 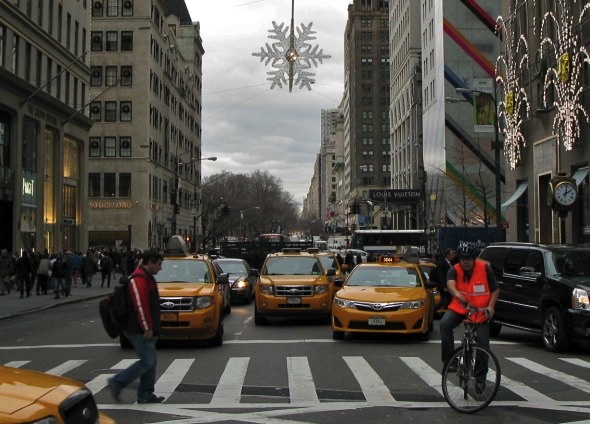 By now you’ve seen the video of a woman walking down the street and all the catcalls she gets. The NYPD could make a similar video. My eyes were opened to what a cop has to deal with when I hung out with one of the cold case detectives who’d been assigned to a post at the Iraq war protest (obviously this was years ago).

Here’s what happened. People trying to enter the protest were constantly being stopped from doing so. They’d come up to a cross street but they’d be told it was closed and they had to go up to the next street to enter the protest. Except they’d go up to the next street and be told the same thing. Go up to the next block. This would keep happening. At one point I asked, “Just tell me the truth, which blocks are actually open,” and the cop had to admit they didn’t know. So after 10 or 20 blocks of this people would lose their patience and they’d stop asking so politely.

I spent some time with a detective who was at one of the closed off blocks. He was further uptown, so he was getting people who were basically tired of being jerked around, they just wanted to join the protest already. My sympathy was with them. But at the same time, it wasn’t this detective’s fault that his block was closed. And it was the boss’s fault that the cops assigned to the blocks weren’t being given accurate information to tell the protestors, like which blocks were open.

So I watched for a few hours as people took their frustration out on this detective and the other cops with him. He knew what was going on and why they were frustrated and he remained polite in his answers regardless of how anyone talked to him. But after a couple of hours his responses got shorter and shorter, and while he wasn’t exactly impolite, he was definitely less friendly and impatient as time wore on. I can see how people with poor anger management skills (and who weren’t being watched) could behave a lot worse under the circumstances. But I could also see losing it. I’m not sure people realized how assholish they were being, even if they had a good reason to be mad.

This is a long way of explaining why I suggest making a film like the one of the girl walking down the street. The NYPD could make a similar video showing some of the things people say and call out to cops as they are doing their job. I know how it can get quite ugly, and it could give the public a real sense of what a cop has to deal with every day. You might also include—except I know this would never happen in a MILLION YEARS—what some of the bosses say and do to their own men and women. That was a real revelation to me when I researched my book, the fact that some of the jerkiest behavior a cop has to deal with comes from the inside! They are not all on the same side in there.

But it would make a great video and it would show how often cops are in a no-win situation, getting it from both sides, the public and the brass.

Looking out my window and down to the street where the police and the fire department are working together to evict a mentally disturbed man from his apartment (this was the guy who thought a Time Warner repairman working in his building was there to kill him and turned on the gas jets in his apartment and left them on). This was the day after Christmas. Talk about a not-fun part of your job. 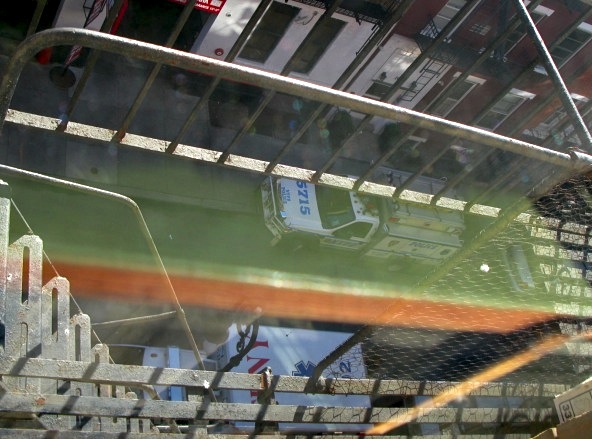 The greatest, most heart-breaking disservice PBA head Patrick Lynch is doing for the men and women of the NYPD is encouraging them to believe that people like myself, who lobby for reform, hate them, that we’re the enemy. He is robbing them of having a decent and rewarding relationship with the public they serve.

If you see a family member or a friend making a mistake, does it mean you hate them if you point it out? Of course not. If I see one cop behaving badly and I say something about it, it doesn’t suddenly mean I HATE ALL COPS, or even that cop. It means I believe we need a way to address and reform the behavior I just witnessed.

I noticed while researching my book about the NYPD that an enduring complaint about “New York’s Finest” is their absolute dedication to the belief that they are, in fact, the best. “When it is assumed that this is true, then improvements are harder to come by,” the International Association of Chiefs of Police wrote in a study of the New York Police Department in 1967. If you refuse to even consider that there might be a better way to do something, how will you ever get better? Like, give me a break, who is perfect?? Who couldn’t use a little improvement here and there?

Unfortunately, I also noticed again and again the violent reaction from the NYPD to even the most friendly, polite and well-meaning criticism. It is so discouraging. It goes beyond disheartening when someone like PBA head Patrick Lynch not only encourages the police to view all criticism in the worst possible light, he leads them to their recent behavior which will never be looked at as their finest hour. They are better than this.

The relationship between the NYPD and the public is a complicated one. I remember after 9/11, I was standing on the corner of Christopher Street and the highway with tons of other people, and we were all holding up thank you signs and cheering the workers going in and out of the site. We were there every day and night holding up those signs. One night, two young cops came up to me and said, “Excuse me. We couldn’t help noticing that all of you cheer louder when anyone from the FDNY goes by, and not so loudly for us.” It was true. No getting around it. I also noticed we cheered less loudly for the sanitation guys. I spread the word and from then on we made sure all our cheers reached the same decibel level. The thing is, the FDNY have it easier, they only show up to save us. The NYPD is sometimes there to save us, but they also show up sometimes to arrest us, or to tell us not to do something, etc. It’s complicated. No one’s fault.

But it takes a leader of incredible strength and grace to maintain a good relationship in the face of all those potential minefields. Lynch is like a belligerent angry child, determined to keep the battle lines drawn. It’s like he doesn’t even want to think about how to improve the terrible situation we’re in now. This is not the leader the NYPD deserves. They need someone who wants to figure out how to fix the relationship between the police and the public and government. They deserve to feel every bit of respect and appreciation that most people do, in fact, feel for them.

The guy carrying this sign was walking in the street, down 6th Avenue (you can’t see him because he’s blocked by that car). I went to the site, fearing it would be hate-filled, but it wasn’t. I don’t agree with his conclusions, but what I read was reasonably stated. 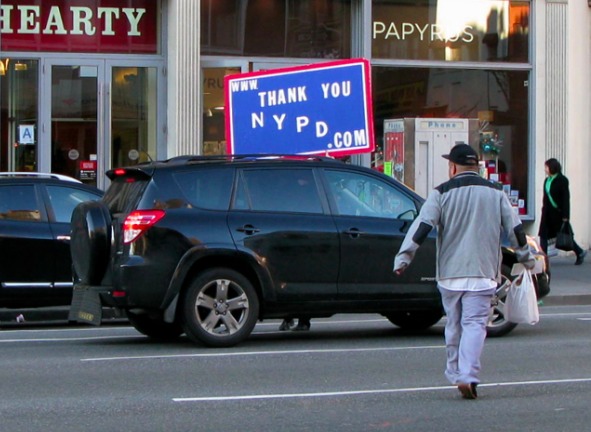 I woke up on Christmas morning and Echo, the online service I run, was completely crashed. Thank God for our hosting service Atlantic Metro Communications, and AlchemyCS, my techs. My system is as old-school as it gets, but Lazlo at Atlantic poked around and figured some things out, and he continued to work on the problem until AlchemyCS woke up (they are west coast based, plus it was freaking Christmas). Everything came back up eventually, but my plans for going out to Long Island to spend Christmas with my family were blown.

Although there were certainly things to eat in my apartment I was determined to put together something at least out of the ordinary for my sad little Christmas dinner, so once everything was back up I went out to forage. Now I know what people who don’t celebrate Christmas go through. I ended up with a quiche and a salad and we just won’t discuss dessert. When I think of what I would have had (my sisters-in-law can really cook)! Sob.

Christmas Eve was a bigger success. I went to the great play In Fields Where They Lay, and you you have two more chances to see this if you are in New York, tonight and tomorrow, and I highly suggest you GO GO GO. It’s about the WWI Christmas truce in 1914. Seriously. GO. After the play I went to a party hosted by old neighbors of mine, the Speichers, and sang Christmas carols. Wonderful people have wonderful friends so I always have such a great time at their annual Christmas Eve parties.

Below are some members of the cast of In Fields Where They Lay singing a carol. Talented people are so often multi-talented. It’s not fair! Not only can they act, but they can sing, etc. For instance, the actor who played the Sargent, Zack Calhoon, stood out for me. All the actors were great for the record, but that character grabbed me. Calhoon is a writer on top of everything else, it turns out. Anyway, this video didn’t come out so well, they were singing in the dark, but you can hear their beautiful voices.

My presents to you, a few must-watch videos. First up, my future husbands, Key and Peele. “We got a James Bond villain running Russia … the earth is burning up …”

Next, Too Many Zoos. Keep listening. Even if you don’t think it’s your cup of tea at first, you will be sold my by the end.

For your holiday viewing pleasure, the latest Talking Animals Christmas video. You won’t regret clicking on that link. And finally, an article (not a video) about the healing power of holiday singing by the fabulous Brenda Peterson!

Old toys. I love windows with old toys, except I didn’t really recognize any of these toys. Maybe they were from before the 50s and 60s, my childhood years. Because yes, I am OLD. 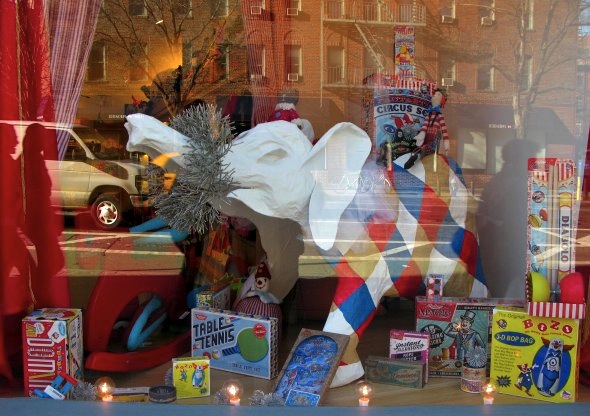