My band, Manhattan Samba, always does the Gay Pride parade every year. I almost didn’t go this year because it was so oppressively hot. Thank God I did because this year there was a torrential downpour. It was so thick and hard and freezing cold at first, and you’d think that would have felt great, but it was shocking, like when you first jump into a cold pool. Plus my eyes were stinging from all the sunblock that was pouring into them. AND, I had to take my glasses off and therefore could only see the people around me. But once I got over the cold and the stinging, and surrendered to being completely drenched, it was positively ecstatic. It is just so completely liberating. Nothing matters, only joy. I wrote about going out in downpour in Waiting for My Cats to Die. Going out to play in the rain and letting yourself get completely soaked is one of life’s best gifts. And it’s free. If you’ve never done it before you must try it.

The next time you have the opportunity, don’t come in out of the rain.

You’re going to want to, and at first you will be cold and unhappy and thinking about your clothes, and dry cleaning bills and how unflattering your hair must look now, but make yourself hang in there and wait for that all to pass.

Here we are, before the rain. I wish I had a picture of us in the rain, but I couldn’t find one. (Picture posted by scottbx on Flickr.) 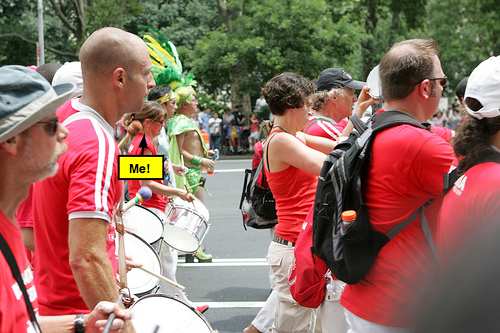 Everyone probably already knows about this place, but I wanted to mention a website called PostSecret. The first time I went, the first few secrets were about awful things people had done and I just immediately went away. I didn’t need more reminders of how much we can suck at times. But I went back a few months ago and, well, it’s hard to describe. Yes, people admit to mistakes they’ve made or the not-so-great stuff they continue to do, but taken as a whole, it’s more about vulnerability, and being human, and there are all kinds of other secrets, large and small, and most of them, in their way, show endless beauty in the very frailty they reveal. I always feel much better after having read them. I can’t thank the guy who created this site enough (Frank Warren), or the people who send in their secrets.

I must have one I can share. But I have to say, I went into therapy when I was in my twenties, and after experiencing the joy and “the truth shall set you free” feeling of telling secrets, I don’t usually keep them. Although knowing how people are, I’m sure I have plenty I’ve conveniently forgotten.

In other news, I went to a West Coast Swing class yesterday. I tried to learn before about ten years ago and had trouble, and guess what? I’m still having trouble! I walked home thinking, “Is there NOTHING I am naturally good at??” The answer was a big fat NO, but I decided there were worse problems than having to work hard at everything you want to do.

[Videos removed because the link no longer works.] 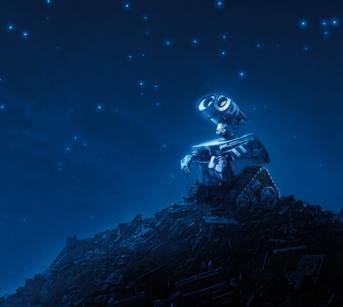 – See Wall-E.
– Buy mineola oranges (my favorite fruit).
– Curl up on the couch and read.
– Eat bread soaked in olive oil that was sent by Cricket.
– Relax in a lush bath and read some more.
– Watch the Katee and Joshua samba dance for the eleventy-billionth time.
– Download some new music.
– Watch downloaded movies.
– Have a nice salad, perhaps. And more bread and olive oil.
– Turn on the AC if needed.
– Pet a cat. Or two.
– Maybe Furminate them. (So satisfying.)
– Admire the lovely color of my nail polish. (OPI, “I’m Not Really a Waitress.”)
– Do some stretches while you watch TV. Notice the polish again.
– Think to yourself, “This is the life” over and over while you still can, before the inevitable panic sets in. 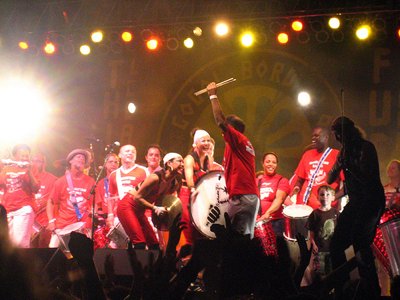 My band, Manhattan Samba, played with Gogol Bordello recently and I read a few blog entries describing it as the party of the year. It looks like it, too. MY BAD. Damnit.

In other news, people have probably seen this before, I think I may have even seen it before, it’s one of those restores-my-faith-in-humanity-type things, but a bunch of people just spontaneously starting writing these hysterical reviews for a set of $500 ethernet cables on Amazon. Oh God! Amazon took the page down. Where is their sense of humor?? Anyway, I cut and pasted a sample:

“I installed one of these cables between my gigabit ethernet switch and my Canon Pixma 6700 color printer. I know it’s not a sanctioned use, but I was looking for the ultimate in speed and color fidelity. I’m freaky that way.

The first time I downloaded a picture to the printer over this cable, the bits moved so fast the printer collapsed into a naked singularity, right there in my office.

Since then, I can’t find the cat, and my entire set of VAX/VMS 4.7 documentation (DEC Will Rise Again!) (Mmmmm, orangey!) has gone missing.”

“If I could use a rusty boxcutter to carve a new orifice in my body that’s compatible with this link cable, I would already be doing it. I can just imagine the pure musical goodness that would flow through this cable into the wound and fill me completely — like white, holy light. Holding this cable in my hands actually makes me feel that much closer to the Lord Jesus Christ. I only make $6.25/hr at Jack In The Box, but I saved up for three months so I could have this cable. It sits in a shrine I constructed next to my futon in Mother’s basement.”

“If Denon had captured the Divine light of creation and distiled it into 1.5 meters of ultramegaradioactive copper, it could not have been better than this cable. Just holding the packaging it comes in, I can see distant galaxies and, though you may not believe it, hear what the aliens there are thinking.”

“I would give this cable eleventy million stars if I could, and once you understand, so will you.”

SYTYCD Comments: I think I watched Katee and Joshua’s routine a half a dozen times. And I think I will watch it a few more times today. God, they’re good.

Comfort and Chris: BLEW ME AWAY. I disagree with the judges. Chris was the weak link, its true, he could have been harder, but still. I was riveted.

Chelsea and Thayne: I love them, but they got the quick step. I wish they would just take this dance out of the competition. Who likes it? NO ONE.

Gev and Courtney: started out labored, but then they got going and I love these two. I love how much he seems to want her for real.

Will and Jessica: Will is so good I have to say, that he really does make Jessica almost invisible. I think I objected when the judges made this point last week, but I have to agree. If you go back and look through this routine, every movement of his, even if it was just to support her, was just hit with such perfection and style and personality and some extra something that puts him in another league, where she just doesn’t belong. 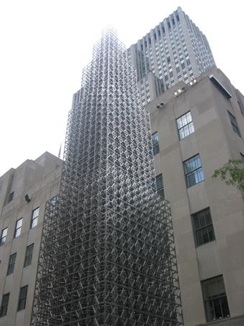 I went to sing last night at St. Luke’s (the Faure Requiem and the Vivaldi Gloria) and the choir director wanted us to repeat the second movement of the Faure, as a prayer for peace for … but I couldn’t hear the country. I asked the person next to me which country he said, and she couldn’t hear me so I repeated myself and then the person in the row ahead of us turned around and shooshed me! I don’t know why this should bother so much but it did! I’m insane. It’s official. (But mindfully insane.) Excuse me! Mean lady! You could have also turned around and answered my question, but no. I’m sorry my hearing problem caused you what? A whole five second interruption to your being able to hear just fine time. Honestly. People. Ugh.

I’ve begun a hunt for new music. I’m tired of almost everything on my ipod. I’ve been enjoying browsing the itunes store, one of the greatest services in the world, I’ve decided, I just wish I could hear the whole song before buying. It’s fine when you know what you want, but when you’re exploring you feel a little vulnerable, paying for music you haven’t really heard except for a few seconds.

This is a picture of a sky scraper made by Chris Burden. It’s up at Rockefeller Center right now and I walked by it the other day. It’s made entirely from Erector Set parts. Of course this sent me off into a nostalgia frenzy. Remember Erector Sets?? Don’t you want to build a robot right now?