I wanted to start a list of must-read pieces I’ve come across about choral singing. My list begins with only two, but I plan to add to it and I would love suggestions.

If Congress Were a Choir

I’ve started emailing this to people who respond to my email about my TEDx talk, and I’ve already posted about this essay here. But Margaret Evans makes so many points about all the valuable things singing adds to life. “Unless you’ve been given a solo – which is a privilege, not a right – your voice should never stand out. It’s all about the blend. There is a strange, inexpressible joy in blending. There’s a joy in lending your own small, imperfect voice to something much greater than the sum of its parts.”

How Can I Keep From Singing?

This was written by Dave Rowe, the choir director for the First Universalist Church Unitarian Universalist in Auburn, Maine. It’s a very moving treatise on the power of song. “The voice is the only instrument we all can play, the only instrument that is hidden inside of each one of us …” I see he also has a number of folk music bands! And he’s a voice teacher. Lucky people who live in Maine.

Why I can’t have nice flowers. Now I have to google to see if lilacs are poisonous. They probably are. Because they are one of my favorite flowers. 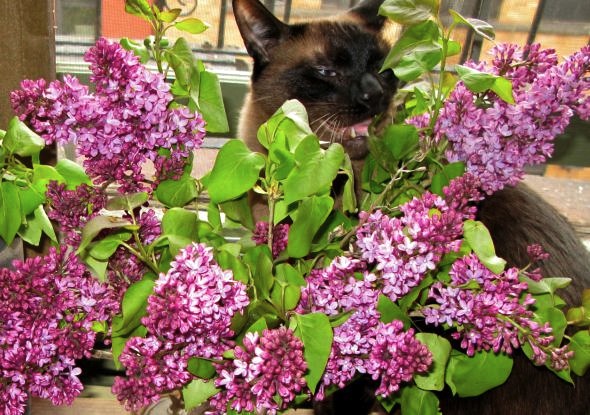 I was sad to learn that doctor and author Sherwin B. Nuland died last month. His amazing book How We Die, which won the National Book Award, had a powerful effect on me. In it Nuland took the top five causes of death and then showed exactly how one dies from each of these things.

Don’t read the next part if you don’t want to know the truth, and the truth is not pretty: he showed how a death with dignity is pretty much impossible to achieve. Death is messy and scary and painful and horrible. That said, it’s a moving and compassionate book. I was able to take a few sentences from the section about murder and quote them in The Restless Sleep, my book about unsolved murder, in order to give comfort to the parent of a murdered child. Believe it or not, there was actually comfort to be had there.

Here’s his obituary from the New York Times. It ends as Nuland’s book ends:

“And so, if the classic image of dying with dignity must be modified or even discarded,” he wrote, “what is to be salvaged of our hope for the final memories we leave to those who love us? The dignity we seek in dying must be found in the dignity with which we have lived our lives.”

Other links: I watched and studied this brilliant panel from the always brilliant Randall Monroe and his web comic xkcd, “a webcomic of romance, sarcasm, math, and language.” I thought Randall would be ruling the world by now. Oh god. He probably IS.

Photographer Elizabeth Herman. Her work from “A Woman’s War” was deservedly featured in the Times. The pictures and testimonies from her subjects woke me up and enlightened me in a way that the news never does.

Finally, for the life of me I can’t remember how I came across this guy’s blog, but he posts a lot about music, reads the same books I do, (he recently posted about Matt Taibbi’s new book, which I haven’t read, technically, but I’m going to!) and comes across as such a smart, informed, charming, likable guy. His “about” section doesn’t say a word! The blog is called: A Year of Guys ~ Talking with Silas, John, J.S., Spencer, Manny, and the Fed.

Here’s his first post, where he explains the intention behind his blog. I was hoping he’d say his name! I just searched on “music” and now I know how I came across his blog. In my daily narcissistic frenzy, when I scour the internet to see how my book is doing, I found a post about my book on his blog (he was a couple of chapters in and liked it so far). Mystery solved. Bottom line: it’s a blog worth following.

Balloons. I love taking picture of people trying to make their way through the city carrying tons of balloons. 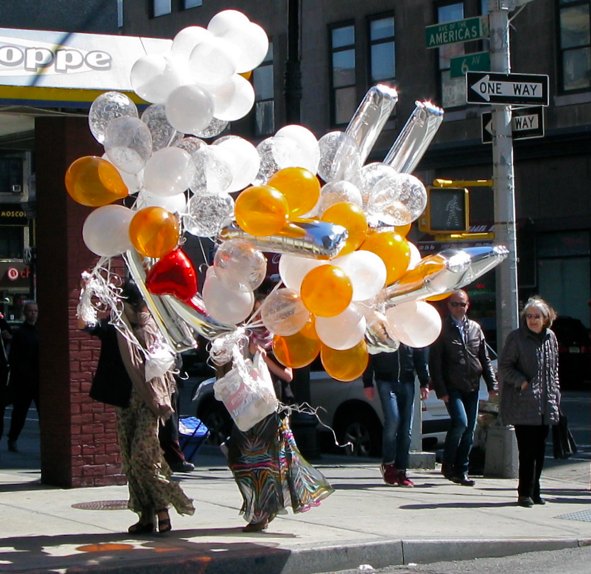 In what has to be one of the more touching, pleasing, best-mood-making results of writing my book about singing in a choir, the Bonneville High School Choir of Idaho Falls, Idaho, came to a rehearsal of the Choral Society of Grace Church and sang for us.

Last year their choir director, Steve Dresen, who had read my book, asked if would be okay if they stopped by when they were in New York this year. I put him in touch with John Maclay, our choir director, and then I didn’t hear anything until last week, when John emailed everyone to say they were going to visit us at out next rehearsal (this past Tuesday).

We weren’t sure if they were going to make it in time. Their flight was due to arrive not long before our rehearsal start time, and you know cabs and NYC traffic. When they walked up the aisle about midway through, all 46 of them, (if I counted correctly) we broke into applause.

I recorded them singing for us. This is a very serious choir, as you will hear for yourself. I couldn’t get over how carefully, professionally, and full of heart their sound is. They gave me chills, especially when they got to the part “Oh where is the key to the kingdom,” in the second piece. We kinda descended on them afterwards, it was just such a pleasure to have them there and they were all so freaking charming. And tired. They had to get up at 5am to get their flights, they told me!

For almost all of them, this was their first time in NYC. John invited them to move here when they graduated and to join our choir and I hope they take him up on the offer. They are singing at Carnegie Hall on Saturday at 8:30 (with 16 other choirs) and tickets may still be available.

Group shot! Don’t you want to just adopt them all?? The movie I made of them follows. Unfortunately, you can’t see them well, they were standing in a spot that wasn’t well lit. I wish I had gotten up and moved closer. 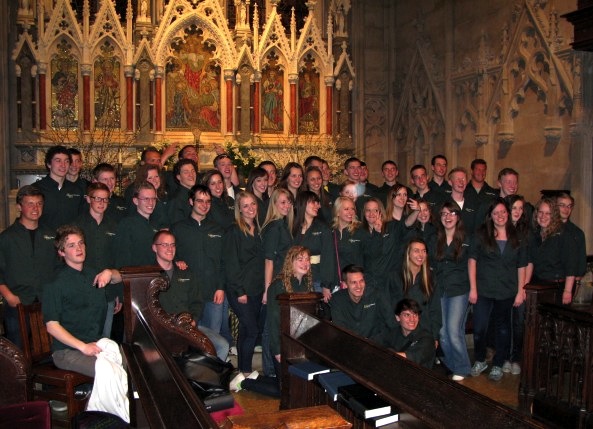 Former reporter/editor Cara Swann, who stops by here from time to time, has made 11 of her books (novels and short stories) available on Amazon. They are all Kindle editions and since I still live in the dark ages I can’t download them! But according to her author page on Amazon, her “fiction is dark romantic suspense influenced by Southern and English Gothic stories with similar elements to Ann Radcliffe, Phyllis A. Whitney and Victoria Holt but adapted to modern-day 1970 through 1995. Also a few crime/suspense novels influenced by Elmore Leonard.”

It looks like Season of the Serpent, is selling the best. Congratulations and good luck Cara! Her books are generating feedback like, “This book was absolutely a page turner that I couldn’t put down,” and “Swann’s prose is effortless and conveys the story beautifully, flowing from one believable scene to the next.” (The second quote was about The Secret of Crybaby Hollow.)

I was browsing through the New York Public Library’s digital archives and came across this picture of the NYPD Glee Club at the 1939-1940 New York World’s Fair. I love that stuffed reptile in the background (although poor reptile). 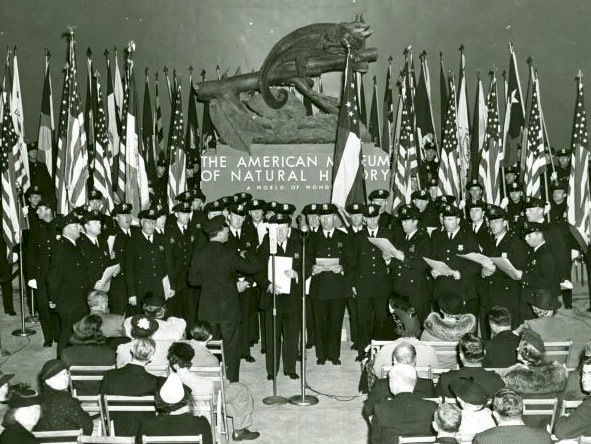 I’ve been emailing links to my TEDx talk about singing in a choir to choir directors, and getting mostly lovely responses back. I recently heard from Theresa Woody, who hosts a show called Choral Showcase on WDAV, (Saturdays at 5pm). She’d already read my book and had nothing but good things to say about it so of course I LOVE Theresa Woody! She is also the music director of UU Fellowship of Lake Norman in Davidson, NC, which is why I emailed her the link. Her plan for next Saturday’s Choral Showcase, April 26th:

Hear My Song: Music For Remembering The Holocaust

Today’s offering observes Yom Hashoah, or Holocaust Remembrance Day. Mostly choral, with a few selections for instruments and for solo voice too, today’s mix honors and remembers the victims of the holocaust, especially the artists and musicians whose work—and lives—were cut short. Little-known composers such as Carlo Sigmund Taube and Viktor Ullmann are featured, along with works by Gorecki, Landowski, Partos and Avni. 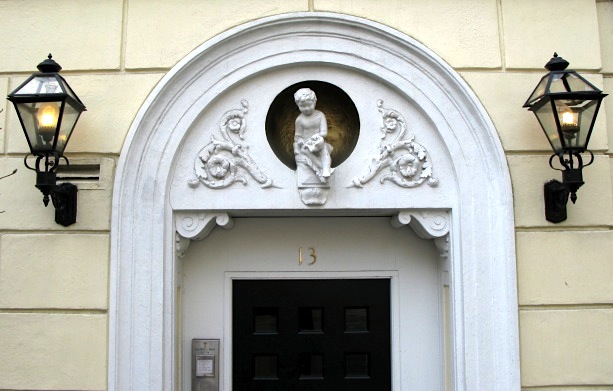