I realize that over the years, aside from my aging, all these pictures I post of myself look exactly the same! I should go through my blog and pull them together and do a “Stacy’s Haircuts Over the Years.”

Yesterday was hair-makeover-day. Earlier this summer, at the raffle held at the benefit for the Choral Society of Grace Church, I won a new haircut from the fabulous stylist Lisa Fiorentino. We scheduled my haircut for the same day I was getting my hair colored for free as part of the Bumble & Bumble Model Project. Bumble & Bumble gives free haircuts and coloring if you agree to let their students do it, which is a great deal because the students are experienced stylists who are just learning a new technique.

Here are some shots from my webcam of the results. They don’t really show the cut well. Lisa gave me a lot of layers which I can play around with, making them go all different directions, which looks all swingy and fun. When Bumble & Bumble blew it dry after the color they blew it straight and under, which is fine, just not as interesting.

Notice how I look best in the pictures where I’m wearing glasses. When I first got glasses in my twenties, people still thought glasses made you look bad and everyone got contacts. I loved how I looked in glasses right from the start. I think these pictures demonstrate why. 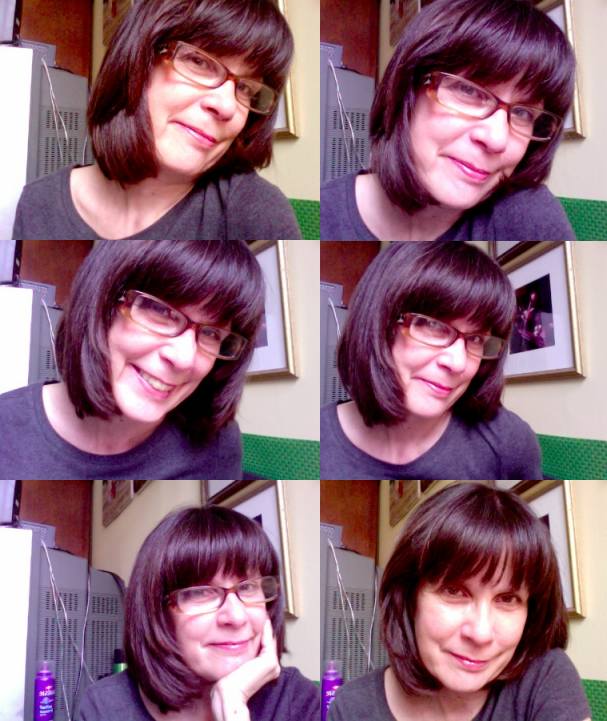 A Quick Recap: The City has a contest—if you swim 25 miles before August 30th you win a tshirt. The man and woman who swim the most laps at each city pool win something else, which I found out last night is a dinner. Plus, the 1st, 2nd, and 3rd place winners all get the dinner.

I am currently in 3rd place at my pool!! There’s no way I can catch up to the women in 1st and 2nd place, they have twice as many miles as I do. They must swim every day, or twice a day. Plus, I started late. (I didn’t whine when I typed that.)

But my lead over everyone else is solid. If I keep going the way I’m going I should be able to hold onto 3rd place. Unless the people behind me start swimming every night or twice a day.
—

In my singing book I tell the story of a riot that took place in Chatham Street Chapel on July 7, 1834. It was started by a choral society and an anti-abolitionist mob, if you can believe it. Interesting riot-buddies. Anyway, the Chapel was torn down and on the site now is, ironically, a prison. I told the story here about trying to get a picture of the plaque commemorating the Chapel, but the prison guards not only wouldn’t let me past the gate to get a picture, they both told me they’d worked there for decades and there wasn’t a plaque about a chapel anywhere. Nowhere, no-how.

So I went around and up to the plaza at One Police Plaza, walked past the benches and into the bushes, leaned over and took this picture. The arrow indicates the plaque. I just thought it would be interesting to show the distance I was from that plaque. Close up below. 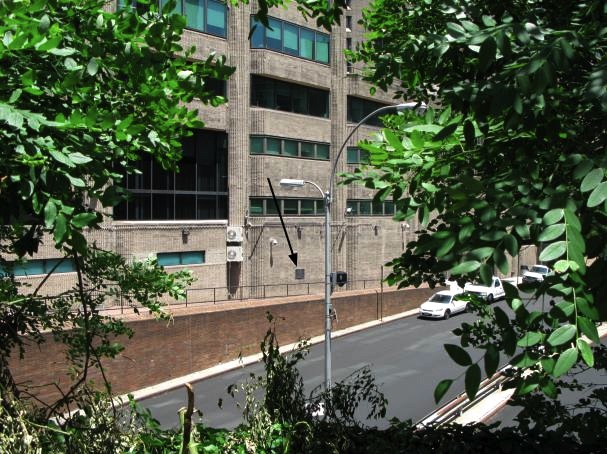 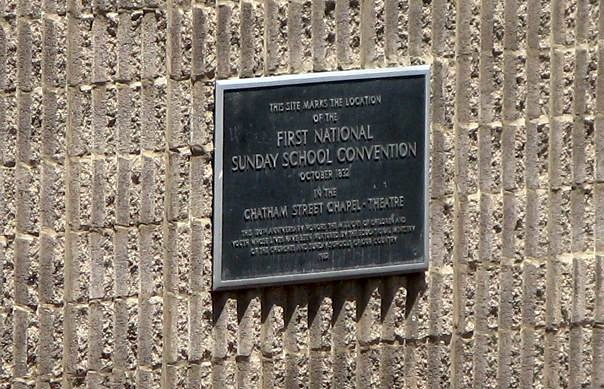 Quick Back Story: The City has a contest—if you swim 25 miles before August 30th you win a tshirt. The man and woman who swim the most laps at each city pool win … something else. I entered the contest except I had a dispute with the City about how many laps one would have to swim at my pool to make a mile.

They say each lap is 47 feet long, so 112 laps. But the City’s website says my pool’s lap length is 50 feet, so that would make 105.6 laps. I called to point this out and didn’t make an impression. I finally just measured it myself with a City employee watching. It’s 48.4. So close enough to 47 to just live with the 112, but technically it’s 110 laps = a mile at the Tony Dapolito pool.

My Current Lap Status: 10 miles and 86 laps. I usually swim a mile and a quarter or more each time, because I can’t be sure I’ll be able to get to the pool enough to make 25 miles.

This is the Domine Deus duet from Bach’s Mass in B Minor. I’m showing this because usually any part of a performance that doesn’t include me/the choir singing is, well … not my favorite part. But this is one of my favorite sections of the B Minor Mass, and the choir (ME) doesn’t sing a note. It’s not even the most dramatic part or anything, it’s the flutes. Just listen. (My favorite part of my favorite section begins at around :43.) The duet is lovely too (but keep listening to what the flute does with them).

The Choral Society of Grace Church will hold auditions for our 2013-2014 season on two or three weeknights in early August (dates TBD). We are looking for experienced choral singers in all voice parts who will blend as well as lead, tune sensitively without sacrificing vocal color, sing easily with and without vibrato, and master their parts independently in advance of rehearsal. Good intonation, a strong sense of rhythm and solid sight singing skills are important. The Choral Society values its members’ time highly and strives to offer a manageable, well-structured commitment.

Rehearsals take place on Tuesday nights between Labor Day and Memorial Day at Grace Church, Broadway and 10th Street. Repertoire for 2013-2014 features a varied program of choral favorites, including works by Palestrina, Pinkham, Bach, Mendelssohn, Gjeilo and Parry, on December 6 and 7, 2013, and a performance of Mozart’s Requiem with works by Verdi, Ives and Thompson, on May 9 and 10, 2014. All concerts are with professional orchestra players and soloists.

To request an audition, please send an e-mail captioned “AUDITION” that includes your name, voice part and choral singing experience to choralsociety@mac.com and someone will be in touch promptly. For more information about the group and to hear sound clips of our work, please visit www.thechoralsociety.org. We look forward to hearing from you!

Musicians I passed by when I went for a walk this afternoon. 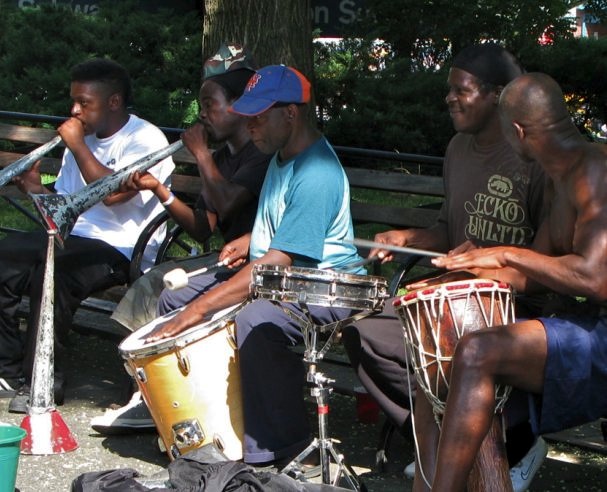 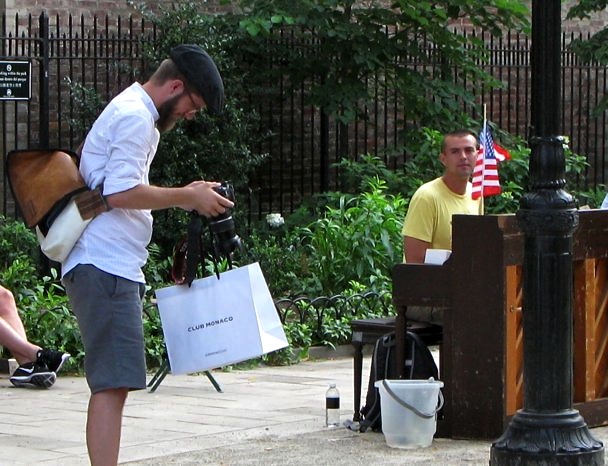 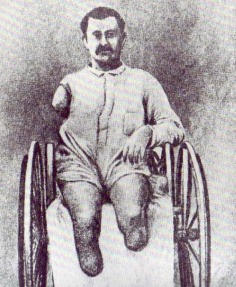 “Apart from the lure of prospecting,” historian Lewis Mumford wrote, “no one entered the mine in civilized states until relatively modern times except as a prisoner of war, a criminal, a slave. Mining was not regarded as a humane art: it was a form of punishment …” (The picture to the left is of a coal mining accident victim.)

When I first learned that coal miners and singing was a thing I wondered how that even got started. With all that coal dust day in and day out, their lungs must have been shot. And then the long hours doing back-breaking work in darkness, often over a thousand feet below the surface, how did they even have any energy left for singing? I read though, about how the mines were echo-less, that they absorbed all sound. I could see how that might have created the need to make a beautiful noise whenever they left them, one that would freely resonate instead of getting swallowed up.

Then I read about a terrible mining accident in Pennsylvania in 1919, and I found this quote from James J. Davis, a Welshman who became the Secretary of Labor two years after the disaster: “I think the reason I have never cared for drink is this: the ease from mental pain that other men have sought in alcohol, I always found in song … ”

Why did I ever wonder why coal miners sing? They sing for the same reasons I sing. Also, choral singing was hugely popular in Wales, and when the Welsh miners immigrated to America, they brought their singing ways with them.

A picture from the June 5, 1919 mining disaster in Wilkes-Barre, where ninety-two men died. So horribly sad. That is a lot of people to bury at once for one small town. I write about this accident and the choral group that formed shortly after in my book. 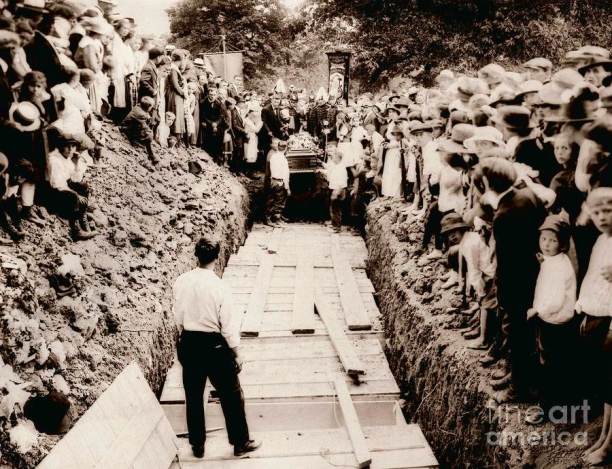