A friend of mine posted on Echo about helping clear out a relatives apartment.  She mentioned finding a bunch of those envelopes of buttons.  I have a baggie full of those envelopes containing buttons. During one of my spring cleanings I gathered them all up and put them in a baggie.  I was kind of proud of that, getting them all into one place instead of scattered in the drawer. Whenever I lose a button, I’ll know right where to find the replacement!  Easily!

But I’m sure I no longer own most of the clothes that went with these buttons that I hold onto so proudly. 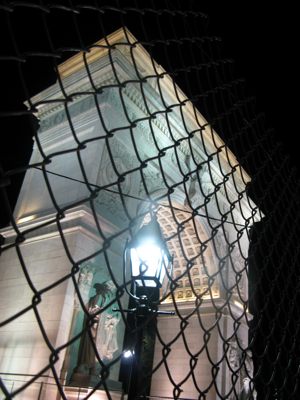 Right now!  Or is that hail? Just the thought of snow puts me into an automatic good mood. Yeah, there’s snow in there, but it’s mixed with rain. Which way will it ultimately turn? Oh please let it be to snow!!

I took this picture last night, it’s the arch at Washington Square Park, which is mostly closed while they completely renovate it. Lots of people are unhappy about the renovation, because it won’t be what it was.   I can relate, I didn’t want them to overhaul the river, but what can you do?  I miss things about what it was, but there certainly is a lot to love about the new version.

But the thing about Washington Square Park is, it hasn’t been what it was for a long time. Union Square is now what it was, and it’s been like that for a while.  That’s where people go for protest, performance, or to gather whenever something important happens.  Washington Square was ripe for reinvention. I think the changes will be mostly good, as long as there’s a place for the chess players.

For the record, a broken record I know, I miss the grittier, more diverse New York, like most of us who are old enough to remember it. And I know people have been saying this for the history of New York, and that it is always changing, and someone is always missing something, I know.

I won’t go on about it, it’s boring, but seriously, you should have seen it.  It feels like a theme park of what it was now.

This guy in the most twee of all twee outfits, and these carts, which are done up in a Ralph Lauren plaid in the back where you can’t see.  For what? Shopping up and down Bleecker?

Just to be Mrs. Buzzkill for a second, he’s standing in front of a store that was once a video rental many years ago.  The owner was horribly murdered, but not in the store.  It was in his apartment, also in the Village, but now I’m forgetting where.  I could probably look it up, but I have a cat on me. 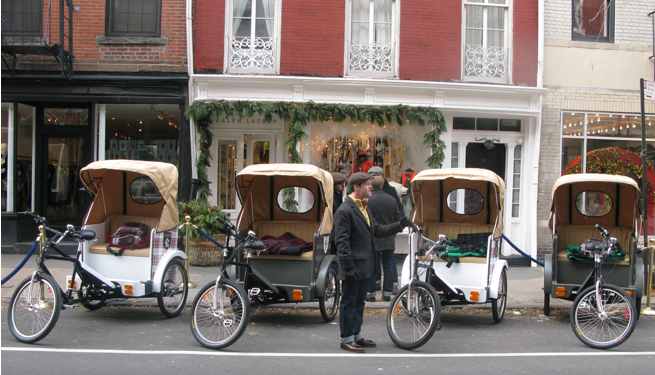 I’ve been following the siege in Mumbia, which finally ended early this morning.  Plus, the story of the Walmart employee who was trampled to death.  I vaguely remember almost being trampled, although I forget the circumstances.  But I remember the sense that the people about to trample me didn’t even see me.  That term “blind panic” really does describe it. Something happened to cause the crowd I was in to fear.  Fortunately I didn’t panic, quickly spotted where no one else was headed and jumped there.  I was mostly lucky though, that there was a spot to jump to.  It’s hard to blame people who are terrified and don’t know what they’re doing, but I still remember hating them, just watching in horror and hating them.  I guess I was being only human too.

I gotta believe that no one in that Walmart crowd meant for that to happen, and we know from history and countless experiments how something like this can happen, the crowd-mind and lack of individual responsibility, but still.  I read that when employees asked the people to leave afterwards, that someone had died as a result of what they had done people continued to shop. That I find harder to understand.

Back to Mumbai, how do people get this damaged?  Interview after interview of people who managed to escape almost all use the same word to describe the killers:  remorseless.  They killed children for God’s sake. I’m so proud of myself.  I returned the pumpkin pie I bought yesterday at Balducci’s.  It really was horrible.  The crust was soggy, the pumpkin part soupy and not well spiced.  They were completely nice about it though. Even better, outside the store, these guys were back!  The shar peis, aka The Three Sweetest Dogs in the World.  They are actually reserved with strangers I noticed, but I can just tell they are loving with family.  One of them had a cast!  Check out his brother (or sister) giving him some sympathy.  My thanksgiving dinner below. 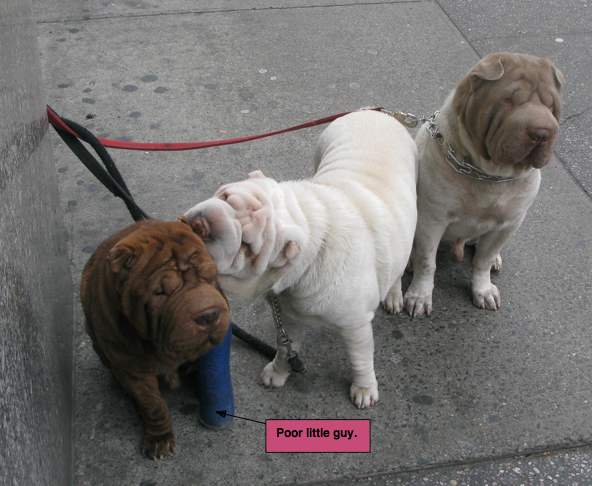 Howard and I always get Veselka to go and watch something on TV.  I got my pumpkin pie, so happy ending all around.  I know it’s out of focus but I love this particular flashy out of focus blur it does sometimes when I put it on the night snapshot setting. 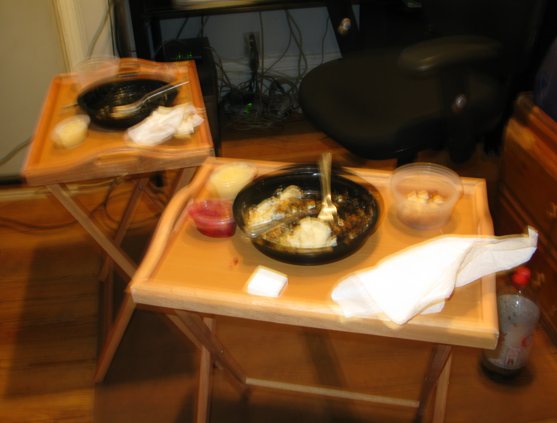