I sprayed Febreze in my livingroom, then lightly rubbed it into my rug and promptly had a severe allergic reaction that lasted over a week. I developed a horrible cough and didn’t sleep more than an hour or two a night. My eyes were red and swollen. It was pretty horrible, but I’m okay now, with a slight residual cough.

The carpet cleaners are on the way to pick up the rug (which is rolled up and in another room right now). The couch cleaners are coming tomorrow. After that I will need to launder anything that might have picked up any particles of the Febreze. And, as long as I’m at it I’m having the windows cleaned, just because I’m spending all this money to clean stuff I might as well do everything and have the place completely sparkling.

Here are a few more pictures from this year’s Make Music New York. This is the group I sang with. We sang the music of J.S. Bach and two of his sons, conducted by Thomas McCargar. 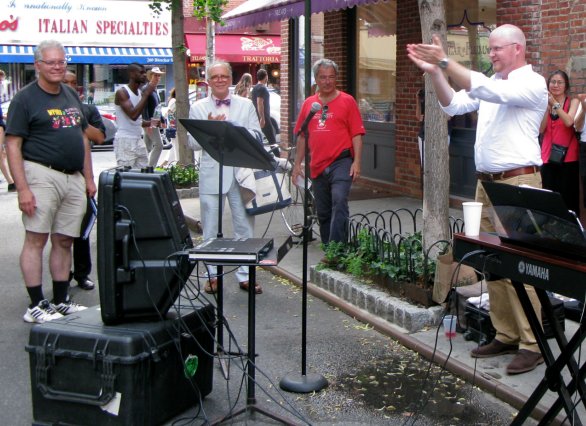 We all stood in a semi-circle on Cornelia Street (the Cornelia Street Cafe was sponsoring our sing). It was quite lovely. I apologize to the soprano next to me. Either she was flat or I was sharping the high notes, and I’m guessing it was me. 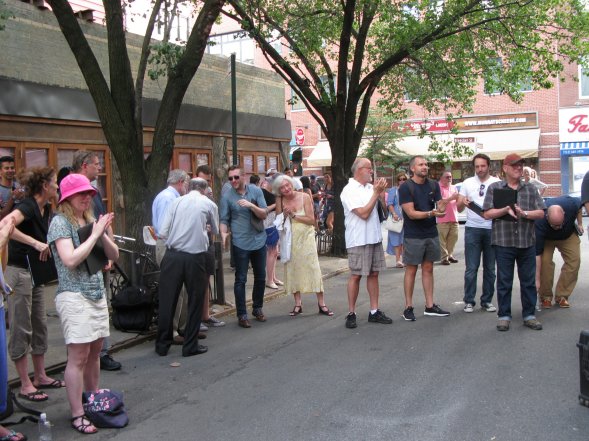 Here are a few more shots I took at yesterday’s Gay Pride Parade. This guy was giving out free Trojan condoms, so he is dressed as … a Trojan warrior. 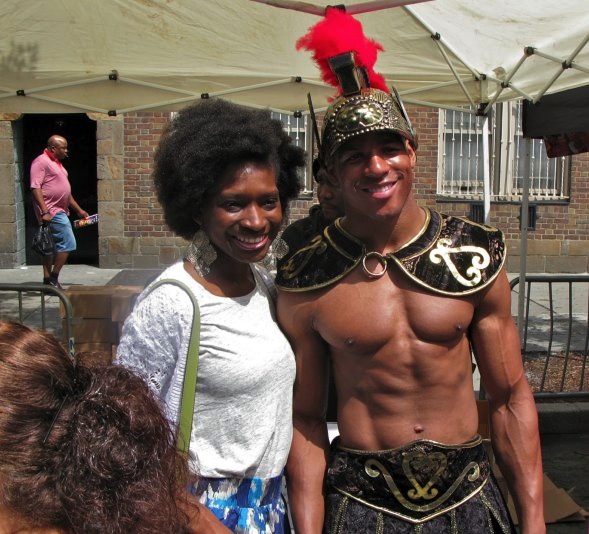 Dancing/twerking in the streets. I have never twerked. I’m going to get up and look in the mirror to see if I can even do it. But later. Right now I have a cat on me. 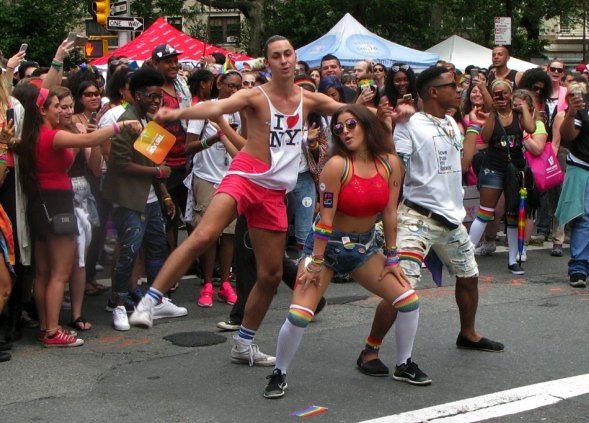 Anyone who wanted to could take a turn at performing. The crowd was very enthusiastic and generous. Whatever you did they screamed and applauded.

IN FACT, I just remembered. Three times I dropped what I was carrying and every time it happened, someone picked up what I had dropped and ran after me and gave it to me. I can’t tell you how touched I was by this. It’s a simple gesture, but in a time when common courtesy seems to have gone out the window, it was very much appreciated. 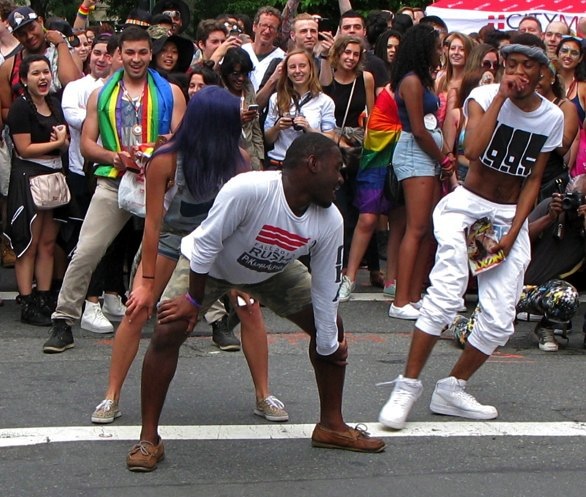 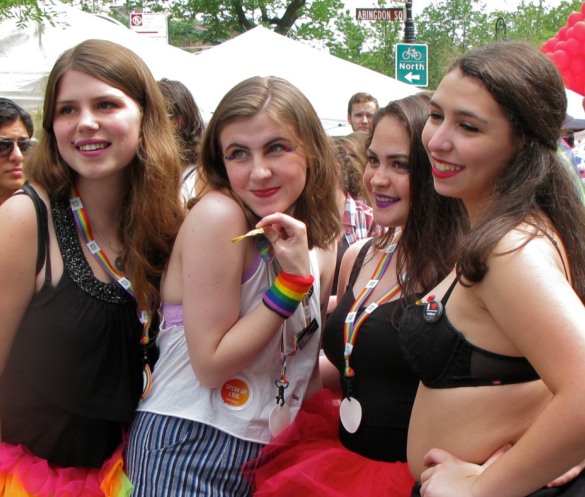 Bubbles! I’m so glad bubbles have become a thing. 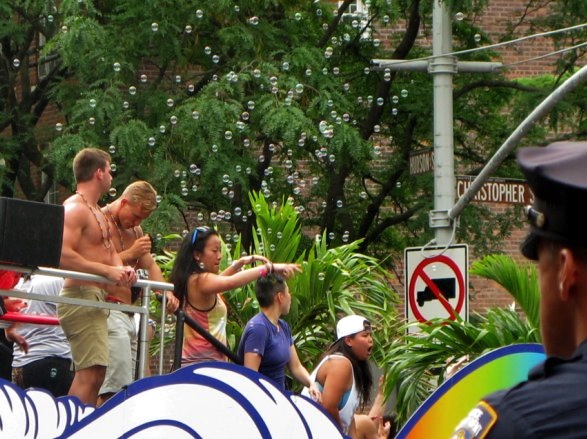 A pink porta-potty, for Christ’s sake. I can’t believe they even come in pink. 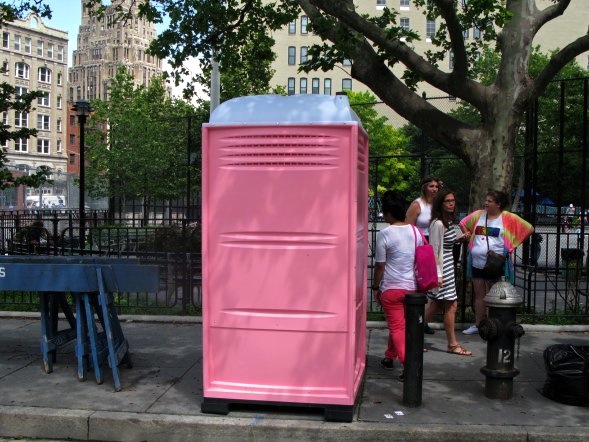 This was a float of two guys posing as grooms on the top of a wedding cake. 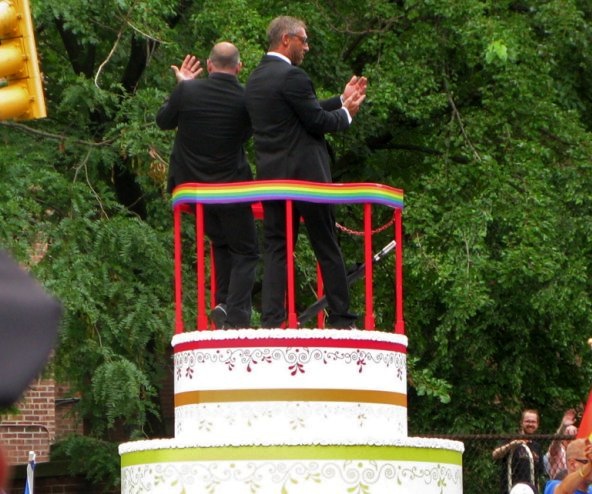 Cute boys being cute. And a little glam-rocker-ish. 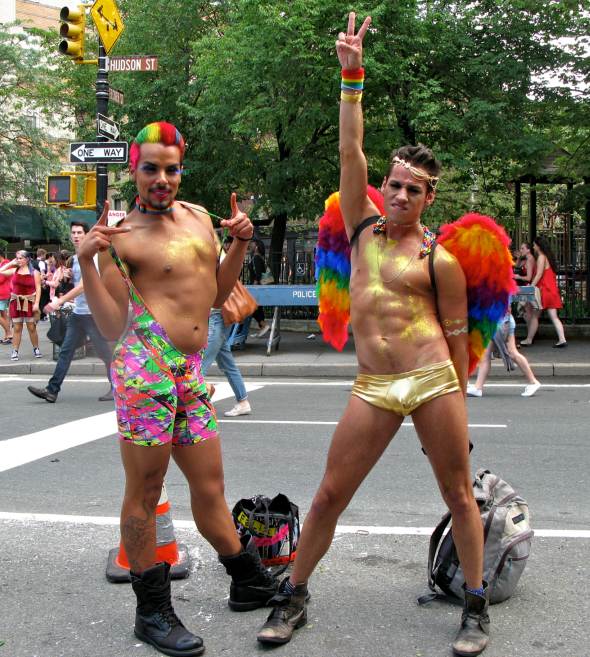 I’ll be back tomorrow with more pictures, but I completely lucked out in the place I found to watch the Gay Pride Parade this year. I parked myself in the first open spot I found, which was off the main route, but happened to be right in front of McKellen’s ride. So when he was done he came back to where I was standing! SCORE.

I took these yesterday at The Stonewall Inn. People were taking turns holding up this sign and having their picture taken. It was very sweet. 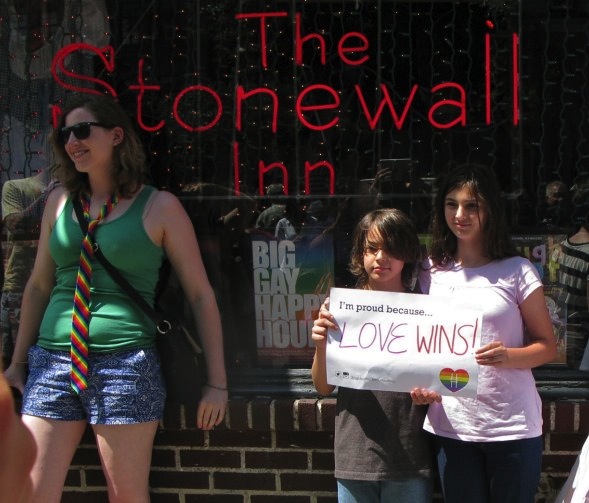 It was a large crowd, (and tons of media trucks) that I’m sure got larger as the day went on. And then I came home to hear Obama sing Amazing Grace. No one and no president is perfect but come on. He’s pretty astounding. 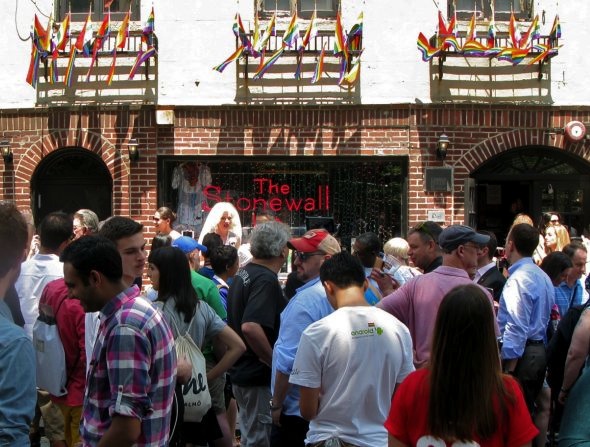 I just heard about the Supreme Court decision ruling that same sex marriage is a right. I was working on a post about this bad cough I’ve developed (I know it sounds insane but I sprayed Febreze in my apartment a week ago and I’ve been coughing ever since. I’m seeing the doctor today, but I’m going out of my mind. It’s driving me crazy. Cough, cough, cough, endless cough, cough, cough).

But now I must pause and savor at least one shred of proof that some things in the world are getting better. Thank you, Supreme Court. Thank you, universe. Now please turn your attention to the religious extremism/mental illness taking hold around the world.

No union is more profound than marriage, for it embodies the highest ideals of love, fidelity, devotion, sacrifice, and family. In forming a marital union, two people become something greater than once they were. As some of the petitioners in these cases demonstrate, marriage embodies a love that may endure even past death. It would misunderstand these men and women to say they disrespect the idea of marriage. Their plea is that they do respect it, respect it so deeply that they seek to find its fulfillment for themselves. Their hope is not to be condemned to live in loneliness, excluded from one of civilization’s oldest institutions. They ask for equal dignity in the eyes of the law. The Constitution grants them that right. The judgment of the Court of Appeals for the Sixth Circuit is reversed.

It is so ordered.

Oh wow. It’s Gay Pride weekend. It’s going to be insane!! I wasn’t going to march in the parade, and I probably still won’t (too tired) but I will be out taking pictures of what will probably be an incredible celebration!! 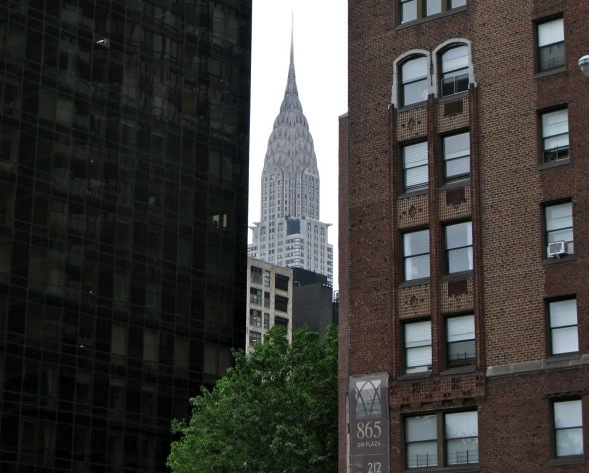