I got an iPhone last year, I’m one of the last people to get one, I know, but I had to watch my pennies! I love it for the things I use it for, calls, texting, and copying documents for my book. But I don’t use it a lot as I see everyone else in the world doing. Everyone else is completely focused on their smartphones.

So from time to time I look over to see what is so mesmerizing. I can understanding how texting and communicating with others can be, or if you are looking something up on google. But often when I look over people are just playing a game.

That can’t be it. There must be others things people are using their phones for, and I’m just missing it when I happen to look over.

So my question is, what are you using the most on your smartphone?

Another picture from the memorial for Carolyn Kaelin. I took this during the fireworks display. 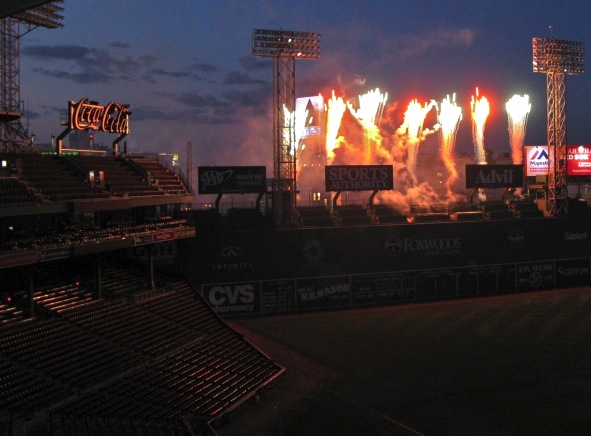 The memorial for Carolyn Kaelin was one of the most astounding memorials I have ever been to. I got there late (thank you very much unnamed bus company) but of the people I heard, of course her husband, my cousin Bill Kaelin, was the most moving. The stories he told!

My absolute favorite of the stories he told was this, and I forget all the exact details except the important ones: she was invited to give a speech celebrating Laura Bush at some event. The speech she wrote focusing on Laura Bush’s contributions to education had to be submitted to the White House. They rewrote it, exaggerating other accomplishments entirely, to the point where Carolyn felt uncomfortable. So when she took the podium, with Laura Bush in attendance and surrounded by Secret Service agents, Carolyn dropped the White House prepared speech to the ground and pulled out her own original speech from her jacket pocket and gave that one.

It is so like my cousin to not be crushed, and it must have been true of Carolyn as well, because afterwards we all went to Fenway Park, where, in addition to feeling the poignancy of the loss, I also had fun, God help me. But I think that was part of the point. 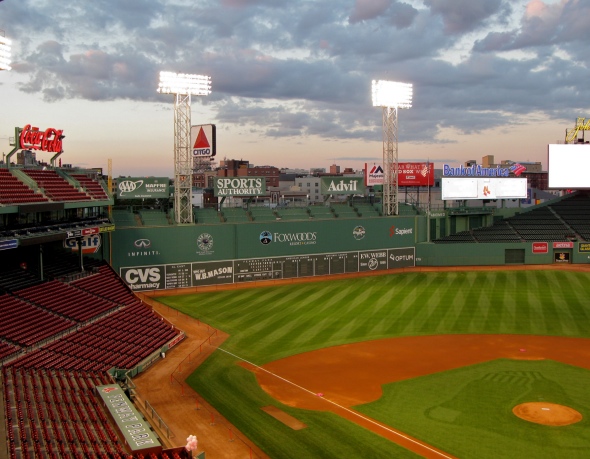 All the bases were replaced with base-shaped flowers (home base was in the shape of a heart). 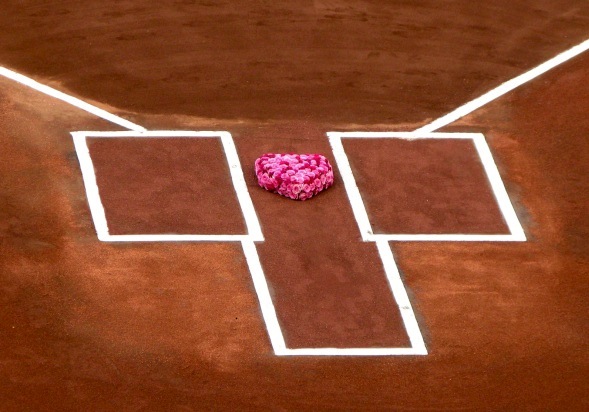 There were signs around the field. 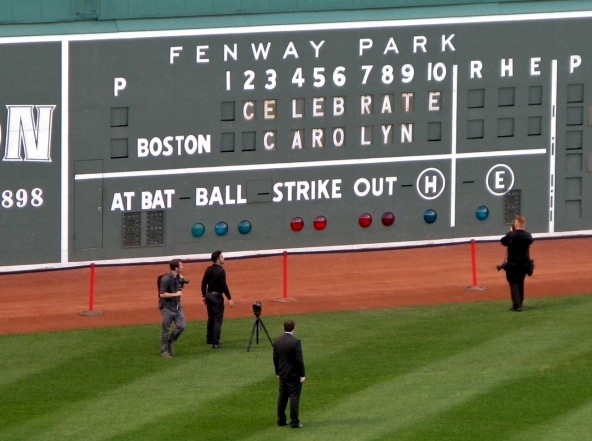 They played Sweet Caroline and we sang along while pictures of Carolyn flashed on the jumbotron. There was a fireworks display to the music of Rocky Mountain High. Carolyn loved Colorado, and John Denver apparently. Bill wasn’t a John Denver fan though, so this was a sweet, final concession to Carolyn’s radio station choices.

This is Bill addressing the crowd, which was enormous. This was about half of it. Carolyn saved and touched a lot of lives. 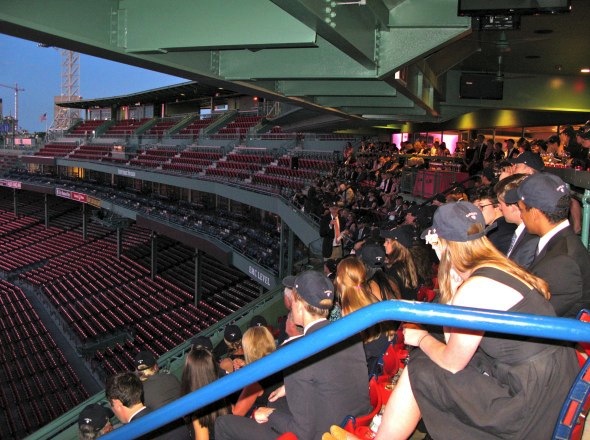 Afterwards we were allowed to walk around the field. 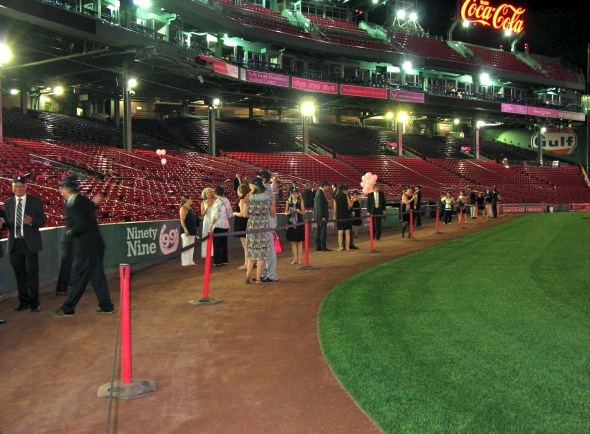 This is me in the Red Sox dugout. Holy shit!! My butt is on the same bench that once held the butts of Yaz Yastrzemski, Carlton Fisk, Jim Rice, Freddy Lynn, and Jerry Remy (showing my age, but those were the years I lived in Boston, and I was there in 1978, says it all to Red Sox fans). 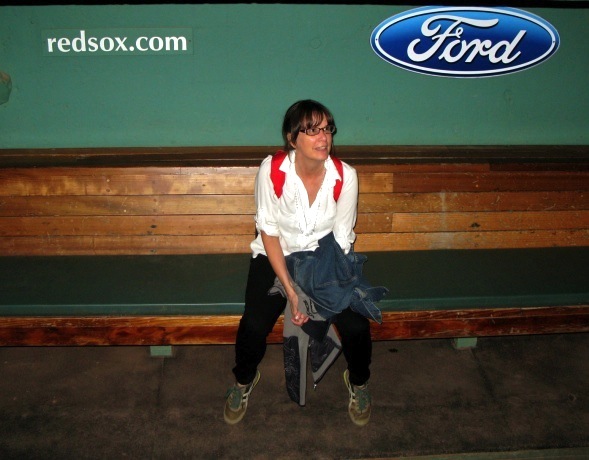 Goodnight sweet Carolyn. Thank you for making the world a better place. And for being such a badass. 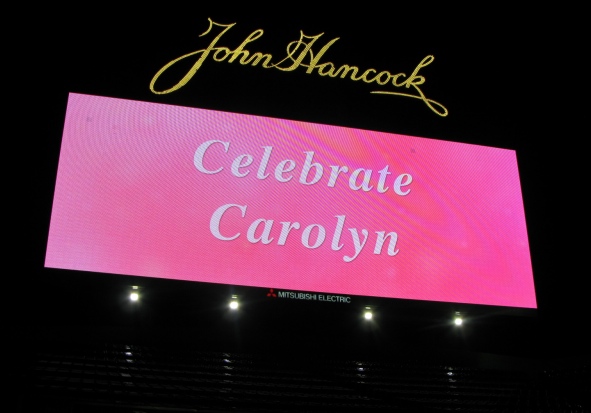 I think Finney would love one of these, to have a place where Bleecker couldn’t bug him. Except I think I’d need to buy him stairs to get up into it, which might defeat the purpose. 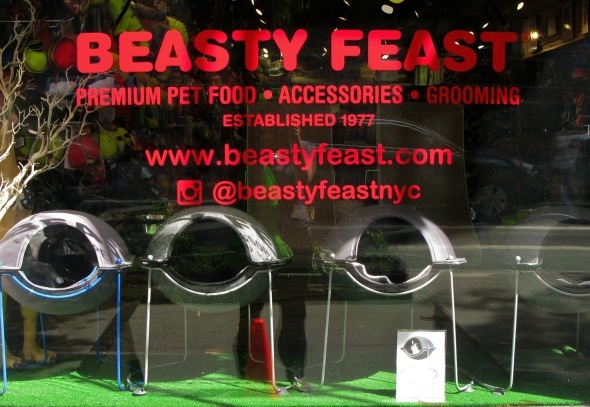 I just wanted to say thank you to Director John Hutchins and everyone else at Citywide Aquatics, New York City Parks and Recreation, for the fantastic Lap Swim program they run every year (for the past 33 years!).

Every year, all over the city, in all boroughs, we get to swim for free outdoors, and to participate in this really fun (and healthy!) challenge. I love it. I love swimming, the people I swim with, and the people of Citywide Aquatics. GREAT JOB everyone!!

Finney checks out my trophy. It’s not edible, so, who cares as far as he’s concerned. 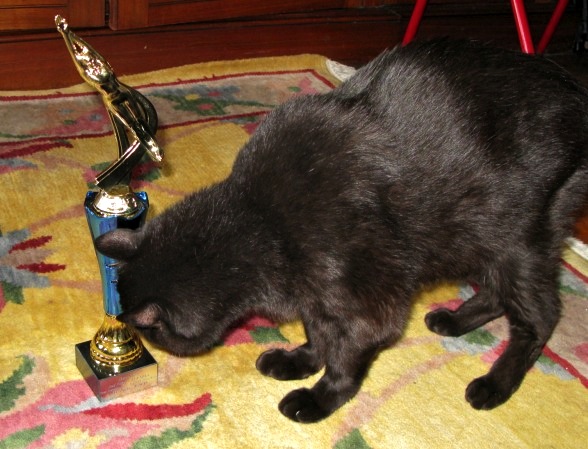 Woohoo! Tonight is the party for all the people who won the City’s lap swim contest, and for the people who swam at least 25 miles!! I’m going to get a trophy and a tshirt and a dinner!!

Plus, there is always a relay race where our pool traditionally comes in last or second to last. This year I will do my part to maintain our losing streak. Wish me luck!

It’s been just ages since I posted a picture of a pack of dogs being walked. And never before by someone on a bike. God I love all dogs. 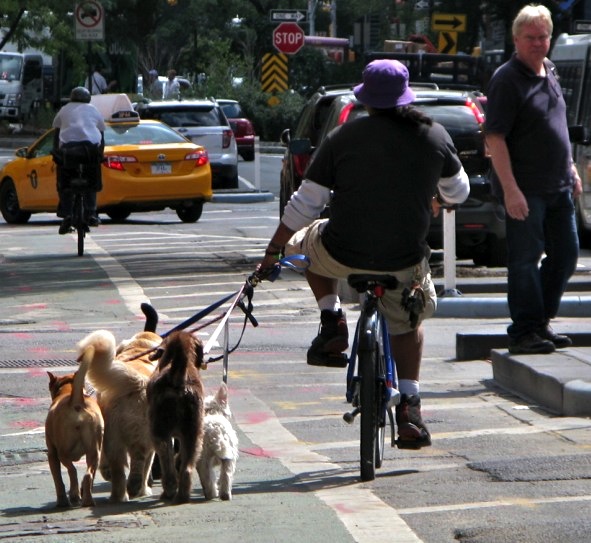