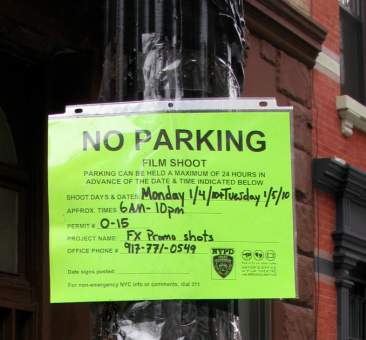 Still recovering from whatever I had, and now I’m not sleeping and going crazy from tinnitus. Plus, this sign was slapped up in front of my building.

Is it promo for good Fox (Bones) or bad Fox (Fox Political Propaganda, I mean News, you know fuck it, it’s not really news and I refuse to call it that, the nicest way to refer to it would be Fox Political Opinion and Republican Promotional Show).

The not sleeping thing is putting me over the edge. I’m not going to make a friends party today and I’m trying to think of how I can spend the day without feeling miserable. I’m behind in a lot of work and I think it would make me feel better to get something done, then get some welsh rarebit to go from Tea & Sympathy and watch the movies I’ve downloaded.

Oh!! Speaking of Bones, my favorite show, I screamed one night because the character “Bones” spoke a line from my book The Restless Sleep. I’m pretty sure one of the writers had to have read my book, or maybe I cut and paste that section on my blog? I think I did, actually. Anyway, I wrote a section about cadaver dogs, and I wrote this line:

“In one cold case investigation a cadaver dog found a body that was wrapped in plastic and buried under concrete four years earlier.”

So in one episode Seeley is doubtful that a cadaver dog named Tutti will be able to find a body that’s somewhere under the floor. Bones says he can and:

“Once I saw Tutti find a dead body wrapped in plastic, under concrete, four years later.”

They had to have gotten that from me! The case I was writing about was on obscure case from Queens in the 80’s. (Or was it the early 90’s?)  It was not big news. Sadly, Queens cases rarely are unless mobsters are involved and this was not a mob case. Although who knows where they heard about it and anyway I’m not complaining, I was proud!