I posted this on Facebook in response to a friend asking me what Obama has accomplished. I will probably edit it a little though and fix the typos.

I do not understand the extent of the hate for Obama. George Bush, who by the end of his second term had left our country in such terrible shape, did not get this level of vitriol, and that’s not counting all the anti-christ, not-American, not-Christian garbage.

Obama inherited two wars, the worst financial crisis in I don’t know how long, probably going back to the depression, a world that hates us, a country that hates each other, and he had to fix this nightmare stew of fiascos with the kind of republicans who have now admitted that their goal was to not let him have any kind of success, to block everything he tries to do to fix the mess they dumped in his lap. And then they have the gall to point out that he can’t get them to work with him.

In spite of all this he has accomplished a lot. I beg of us all, give credit where credit is due. We averted a depression, everything is slowly improving, the deficit is falling, unemployment is falling, the stock market is at an all-time high, he ended the war in Iraq, he’s winding down the war in Afghanistan, and to those who listened to his speech, he is now winding down and limiting the war on terror, and even though many presidents have tried to institute some form of national healthcare, Barack Obama gave us the Affordable Care Act. I could go on, but here is a list.

One could argue that the list was compiled by [fill in the blank] but nothing on this list in untrue. I suggest reading it to the end to truly understand what he has accomplished (because, for instance, the science stuff, some of my favorites, are towards the end!).

To that list I would add (because they came after it was compiled) immigration reform and helping usher in an age of civil rights for gays.

Disagree with the guy if you want, I do at times, express disappointment when he doesn’t act when he should, or as strongly (Guantanamo Bay) but for the love of god, let us end this period where we have to hate each other when we have different opinions, and vilify the other party’s representatives. We can do better than this. I’m sure I’ve been guilty of this myself, but I will do better in the future.

I’ve posted pictures of this spot before. It’s the northern end of Washington Square park. This section makes me feel at peace and happy. Weirdly, even though it does that for me, and is also arguably the most beautiful part of the park, it is always the least populated.

NOTE: I’ve got the Naval Academy graduation on in the background, and their responses in the ceremony are yelled with such vigor! And they all sound like if they sang in the choir they’d be basses. 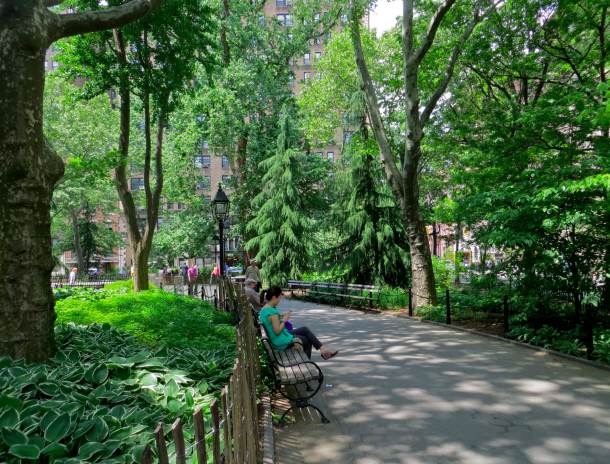 Yesterday, not only did Pope Francis make it clear that you didn’t have to believe in God to be a good and righteous person, he believes even atheists will be redeemed.

I have problems with this Pope and organized religion in general, but this was very decent of him and it came at a particularly important time.

“The Lord created us in His image and likeness, and we are the image of the Lord, and He does good and all of us have this commandment at heart: do good and do not do evil. All of us. ‘But, Father, this is not Catholic! He cannot do good.’ Yes, he can… “The Lord has redeemed all of us, all of us, with the Blood of Christ: all of us, not just Catholics. Everyone! ‘Father, the atheists?’ Even the atheists. Everyone!”.. We must meet one another doing good. ‘But I don’t believe, Father, I am an atheist!’ But do good: we will meet one another there.”

In a world where some people are denying other people’s basic human rights, or worse, hacking to death those with different beliefs, this is a GREAT development. Jesus preached love. (The opposite, for instance, of this very un-Christian Christian.) I think it’s enormously compassionate of this Pope to envision a God that will not punish me for my disbelief, but instead embrace me for being a good person.

Whenever someone has told me I’m going to go to Hell (and I get told this from time to time) I always think that’s so insane. Even if I was wrong about there being no God, I can’t imagine that God would be so petty as to condemn a basically decent person like myself to be burned for all eternity. It makes no sense.

In other miraculous news, the Lion (Bleecker) laid down with the Lamb (Finney). 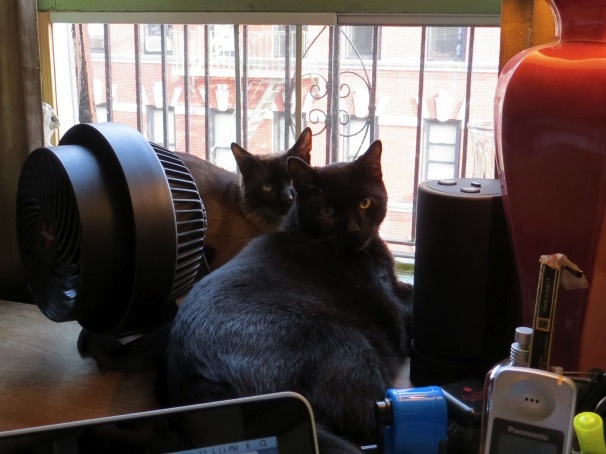 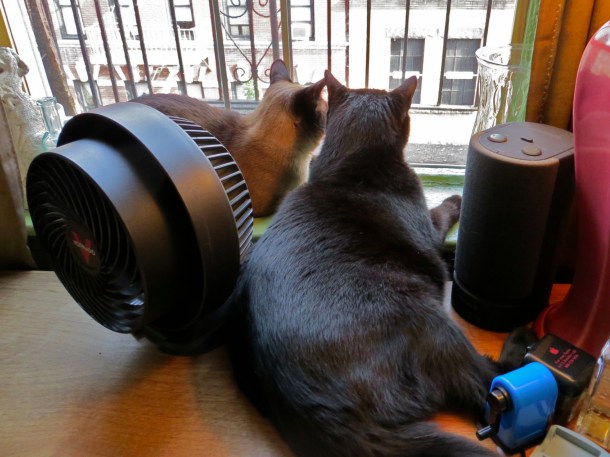 SiSSYFiGHT 2000, an online game produced and released in 2000 by the online magazine, Word.com, is poised to return! There was absolutely nothing like it at the time, and it’s still relevant today.

From their Kickstarter page:

“In the mystical years of the late 90s, a little game called SiSSYFiGHT 2000 was born on the web. Hundreds of thousands of players fought as bratty little girls, teasing and tattling and licking their lollipops on the playground. An amazing community sprang up around the game, in which players became fan artists and storytellers, reporters and celebrities, criminals and vigilantes.

“There was something special about SiSSYFiGHT. It was one of the first multiplayer games with real-time chat in a browser. It was a social game with actual social gameplay, long before “social games” on Facebook existed. Its stylishly primitive visual look preceded the rise of big-pixel indie games by almost a decade.” 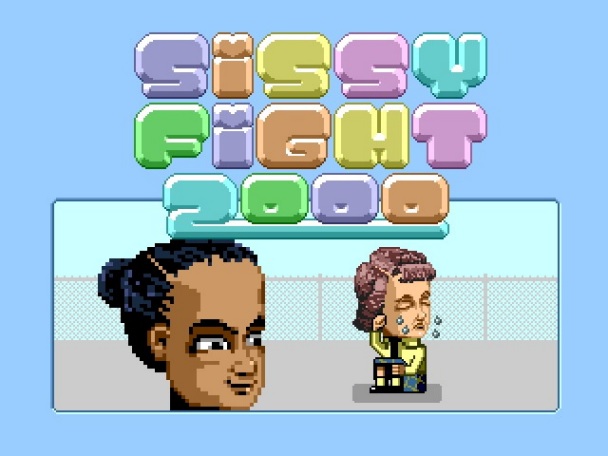 After seeing yet another wandering dog in a news report I came online to see what was being done about missing pets in Oklahoma. Via a tweet, I found this subreddit that was created to help reunite owners with their pets. Please help spread the word. For easy cutting and pasting, here is the link:

A picture of a found dog from one of the posts. 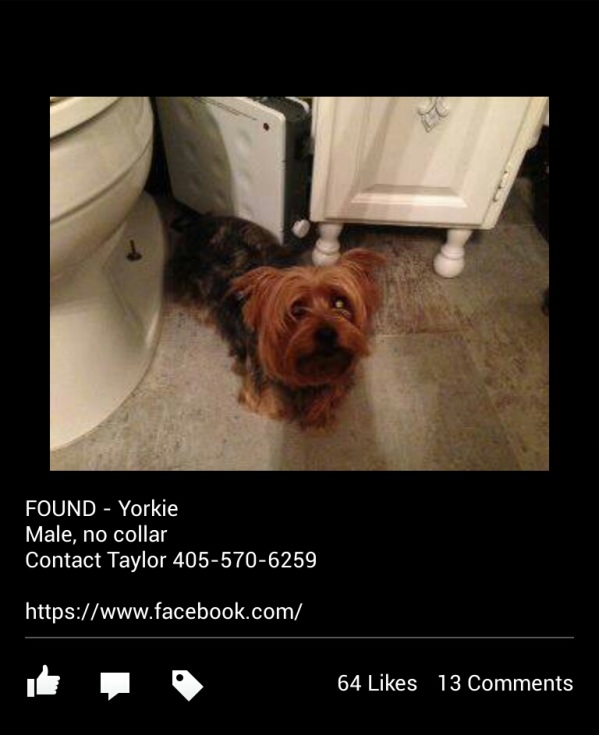 Keep your spirits up, New York City loves you too. 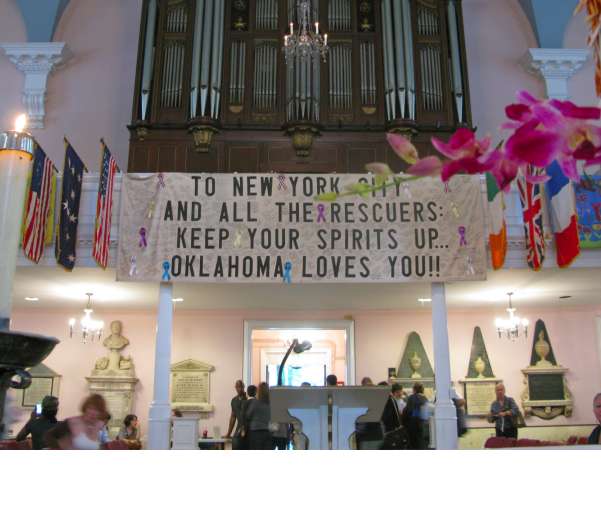