The picture below is of New York City Police Commissioner William Bratton and First Grade Detective Wendell Stradford of the Cold Case Squad (I wrote about Wendell in my book The Restless Sleep). I forget what Wendell told me this picture was for! Probably for a ceremony for the plaque of Jack Maple they are standing in front of. Jack Maple was a Lieutenant with the New York Transit Police when he came up with the system that would later evolve into Compstat. Bratton was then the Chief of the Transit Police. When Giuliani appointed Bratton Police Commissioner in 1994, Bratton brought Maple along as his Deputy Commissioner of Operations.

The early history of Compstat is fascinating and brutal, and not everything that came out of it is a great thing. I remember thinking it was hard to understand why something like Compstat wasn’t in place long before, but it’s not surprising that the murder rate dropped so dramatically once it was (and other crimes too, but when I was researching my book I was only looking at homicides and the history of homicide in New York City).

No one could tell me for sure who first floated the idea of a cold case squad, but everyone was pretty sure it was Jack Maple. Thank you, Jack Maple. 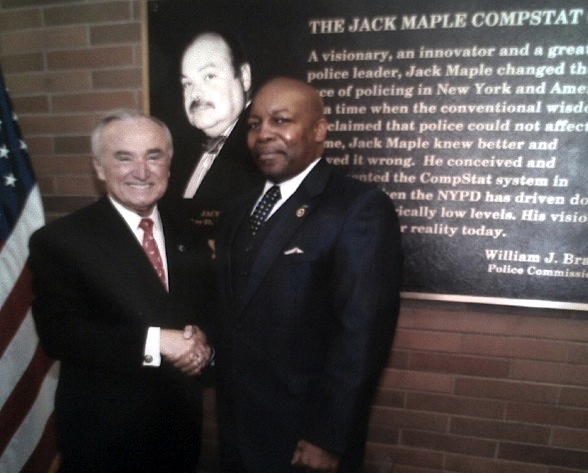