I decided to go the Library before holing up for the storm. It was a great decision. I found some really good material for the chapter I’m going to start working on tomorrow.

New York City was upgraded from a blizzard watch to a blizzard warning, so I’m very excited! We’re supposed to get 10 – 15 inches, which is a lot, but not like the storms of yesteryear. Still, I can’t complain. Snow!!

On my way to the Library, I passed by not one but two photo shoots in my neighborhood. So, others are trying to get some work done before the storm hits. Here was a friendly (and pretty, of course) model! 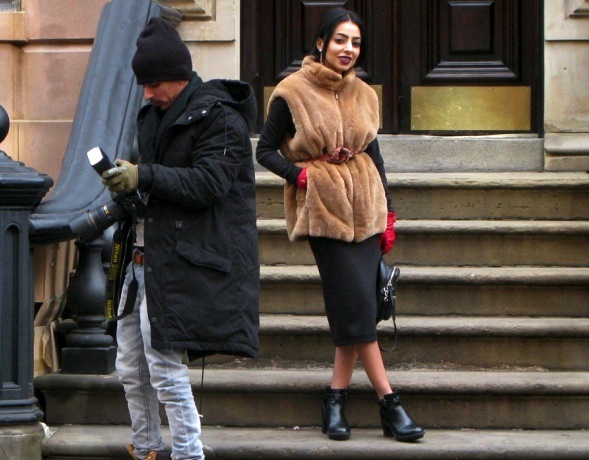 I’m torn. I’d enjoy being both the model and the photographer. Although, now I’m remembering the times when I was the subject, it can get kinda tedious. I’m changing my vote: I want to be the photographer. UNLESS, the model gets to keep the outfits. 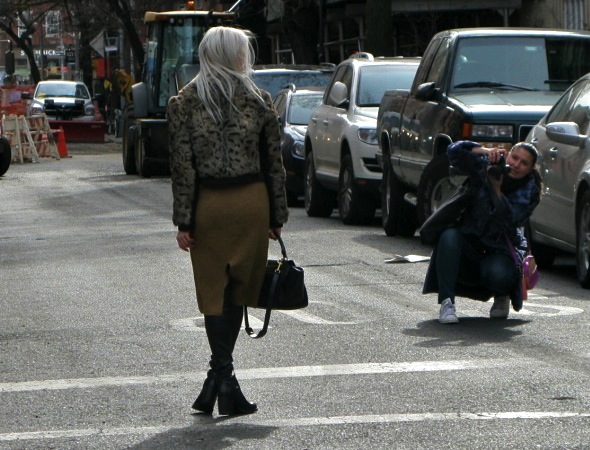 I love a good snowstorm, so I hope we actually get one. Here are a couple of shots from our first snow of 2016 last Sunday. It was just a dusting really. I took these on the way to Grace Church, and then leaving the Church to come home. 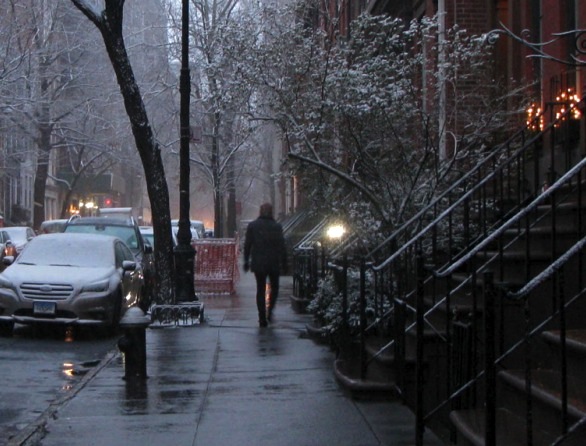 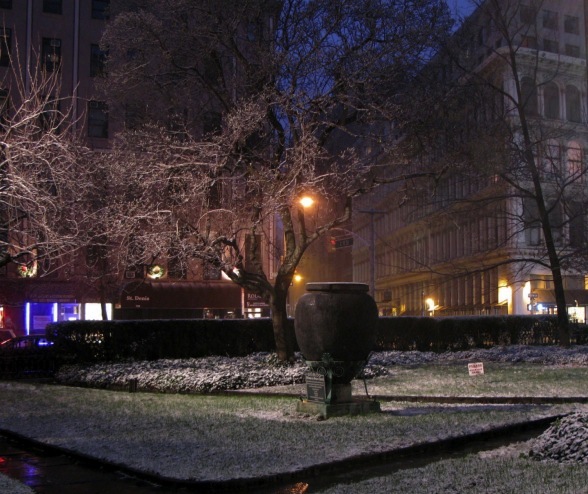 He was singing on my fire escape a minute ago, and I loved the sounds he was making! So did Bleecker. Ah, is it a robin? I just googled it and I think it’s a robin. I wish I could have robins flying around my apartment. Except for the mess. And the fact that they’d soon be murdered by cats. Thanks for stopping by, little guy. 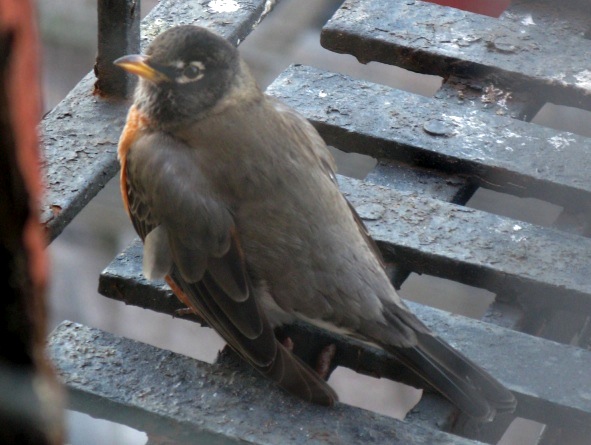 I feel like I’m writing way too many of these, but it’s only going to get worse, isn’t it? I knew Angus through Echo, the online service I founded in 1989. Angus came along, and became one of Echo’s saviors. Echo never made a lot of money and I could never afford all the help I needed, but from among the users help was always there. Angus was one of the big ones. Sweet, maddening, generous, immature, mature, always there to help, whatever was needed. He was this great big wonderful caring teddy bear of a guy who would sometimes bite. (I have this funny image, more of an audio image really, but whenever he crossed the line I can hear Hadley reining him in with a quiet, “Angus.” And he was so sweet and eager to do the right thing and he trusted her judgement.) Angus was smart. Funny. I hadn’t talked to him in a long time, and now it’s too late. People are posting their memories of him, and their last conversation, and I’m jealous of all of them.

Thank you for everything, Angus. I owe you so much, as does everyone on Echo, who made friends, who met the loves of their lives, and found jobs, because you helped keep Echo going.

This is Angus in 1995, at Phiber Optik’s welcome home party at Irving Plaza (Phiber was Mark Abene, a hacker who worked for Echo and who went to jail for a year). 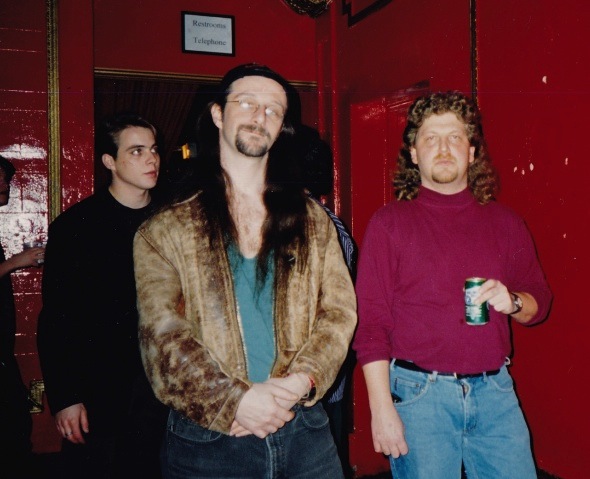 I don’t want to defend New York against Ted Cruz’s ignorant comments. What he said was more of a disservice to the rest of the country and conservatives.

For years politicians have been pitting one group against another. “We’re” better, smarter, more moral, more whatever than “them.” The result is this awful, adversarial us vs them world we’re in now. I’m not the first to point this out of course, I’m the billionth.

We have to stop taking the bait. I have conservative friends, and members of my family are conservative. I am very liberal. As far as I can tell, even though we live different lives, some are religious, some are more this or that, we all have pretty much the same values. We love our families and friends, we try to be good people, we try to make the world a better place, or, at the very least, not leave it in worst shape than when we got here.

For instance, conservatives are often portrayed as intolerant. Some are, just as some liberals have the characteristics often associated with being liberal, but whether they/we do or they/we don’t is an individual failing and not characteristic of the group.

I’ll never forget after 9/11, and I was on the West Side Highway. It was maybe a week later, and the West Side Highway was closed off to all vehicles except rescue vehicles, which were mostly FDNY, NYPD, Sanitation and construction worker cars and trucks. Then up rolled truck after truck after truck from a Baptist church somewhere in the deep south. I wish I could remember the name of that church so I could give them a proper thank you, but I’m old and I’ve forgotten.

The trucks were filled with supplies for New York. The supplies weren’t for Baptist New Yorkers, or conservative New Yorkers, they were for whoever needed it. I’m sure those Baptists disagreed with a lot of New Yorkers about how we live or who we are, but they were here to help all of us, not just the people they agreed with. It was a true Christian response, and it never fails to make this non-Christian cry. I’m crying now. (Of course we got help from all over the country and the world. I’ve told my Nagasaki story, right?)

Ted Cruz biggest sin was not trying to portray us (New Yorkers and liberals) as immoral, gay money lovers, it was making conservatives look bad and hateful.

Again, we have to stop taking the bait. We have to stop letting them pit us against each-other. Being a good and decent and moral person are characteristics that are common to people from all different groups.

Let’s disagree all we want, but we must stop demonizing each other. It’s stupid and wrong.

I took this at Grace Church while waiting for Amahl and the Night Visitors to begin. 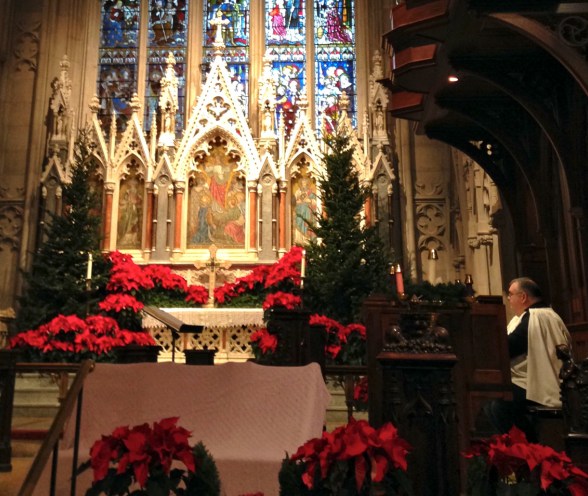