God, this episode of Last Week Tonight is so well done. If only everyone would watch it. He quoted from the Kerner Commission! I’ve been studying that report as part of my research (which is actually about fair housing and mortgage fraud, but when I wanted to see how the mortgage fraud began I was led to the riots of 1967 and 1968, the Kerner Commission, and the recommendations in their report).

The history he highlights and the line he draws from that history to now is so correct and so important.

I’m still trying to practice social-distancing, so I’m not protesting. But a friend and I were cheering a group from the sidewalk today, and that made me feel better. The pictures below are from Union Square, and the protesters heading west on 14th Street. Now I’m back home, exploring other ways to help from the sidelines. 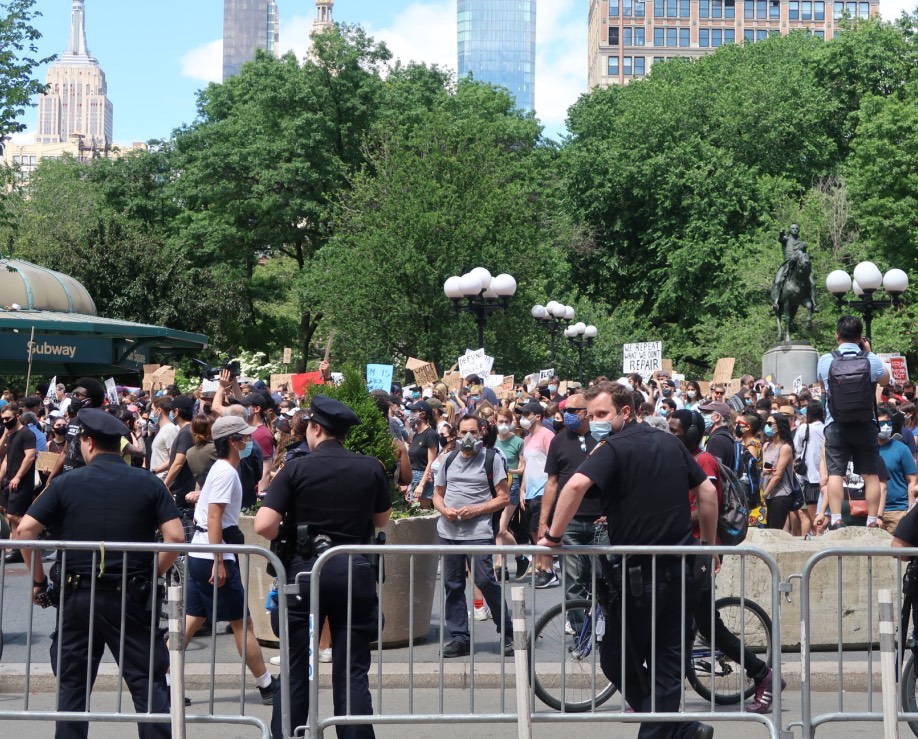 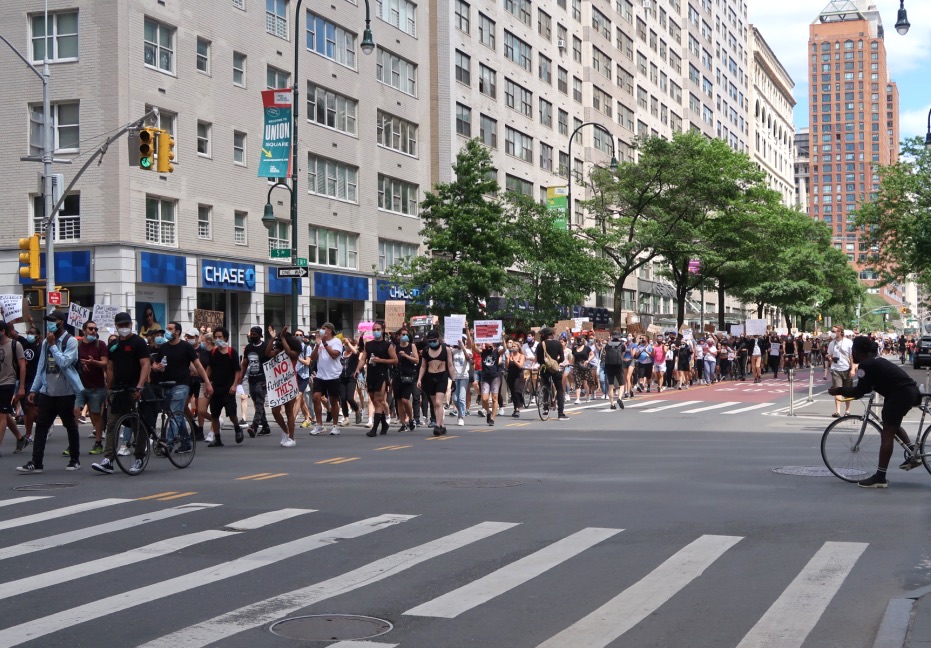 I hate when I see evidence of good people behaving badly, and holding some ugly ideas. How will things ever change?

A sign on the highway. I pressed the shutter just a second too late, but it said “social distancing.” Which many runners continue to ignore. It’s supposed to thunderstorm, but I need a good long walk and plan to head out there in a little while. Look at the water in this shot. It was like glass. I pretty much never see it like that ever. 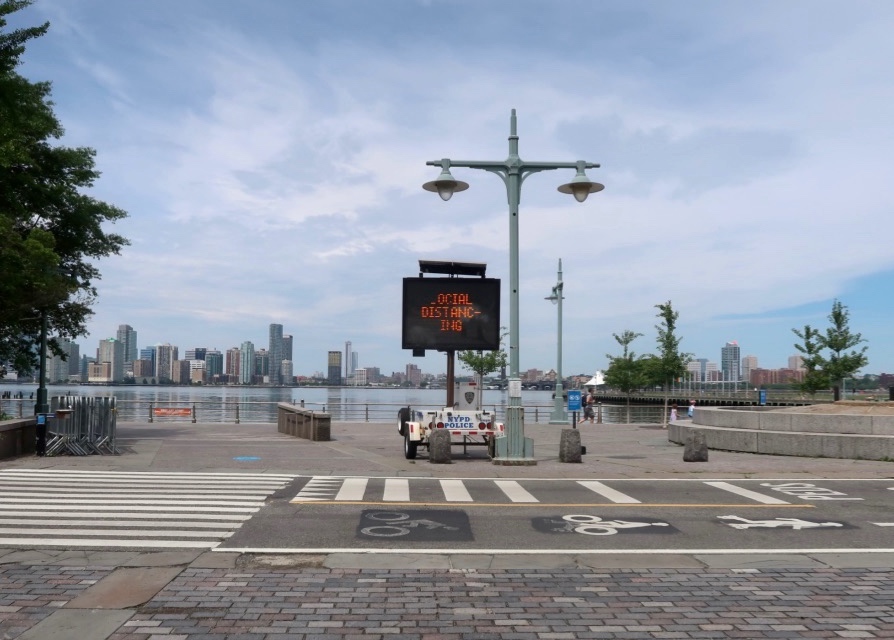 I was watching the news, they were showing Lafayette Square, and it was peaceful, when all of a sudden the police started moving in aggressively. It was really weird. It was before curfew, there was nothing that prompted it, and then out of the blue, they just attacked. They started gassing the crowd, shooting them with rubber bullets, and they really went at it. You could hear so many bullets being fired, and those stun grenades. One reporter said an elderly gentlemen kept getting hit because he couldn’t get out of the way. You can see it on replay somewhere, I’m sure. It was absolutely insane.

Then we all learned it was all for a photo-op for Trump.

This morning I’ve been reading accounts from priests who were there, and who were also chased away. Apparently the Episcopal Diocese of Washington had organized a group of priests and volunteers to hand out water and snacks to the protesters, (what a lovely gesture) and they’ve been expressing their outrage. This is from the Rt. Rev. Mariann Budde, the bishop of Washington.

You can read their accounts on Facebook. It’s horrifying. They didn’t have time to grab their medical supplies. Then I read reactions from people around the world about all that is going on, and I am ashamed for our country. I also read an account of those eight minutes that Chauvin held his knee against George Floyd’s neck, and how he kept his knee there even after Floyd lost consciousness, and even after paramedics arrived, and how Floyd voided his bladder towards the end, and I just can’t bear it.

But nevermind our horror. Trump wants to get a picture.

From my walk yesterday. I was right underneath One World Trade, admiring how it looked disappearing into the clouds, and a guy on a bicycle rode by calling out, “it’s a beautiful building, isn’t it,” and it was a sweet moment. Two strangers sharing a moment of appreciation for a work of art. People are good, people are good. Those priests and volunteers were helping those protestors fight the good fight. Think of them. 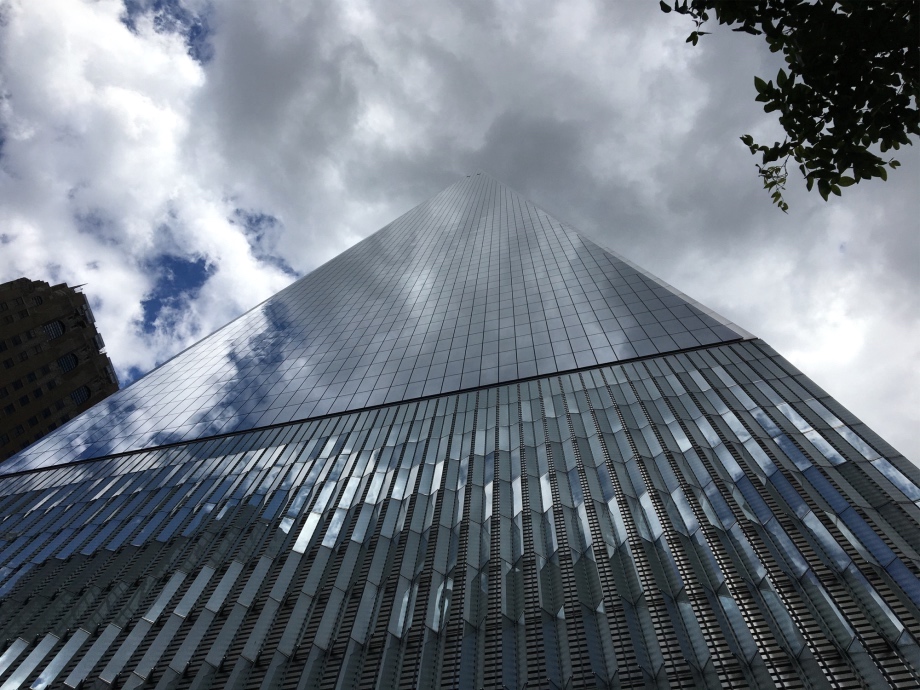 As I was walking through Soho a couple of kids were laughing and saying they’d be back tonight. They were not protestors (who were up in Times Square and elsewhere, actually protesting). Also, I noticed when I was watching the news last night, that many of the fires became intense and large almost immediately. I believe the people starting them were carrying accelerants, and were also not protestors, but trouble-makers of one kind or another. 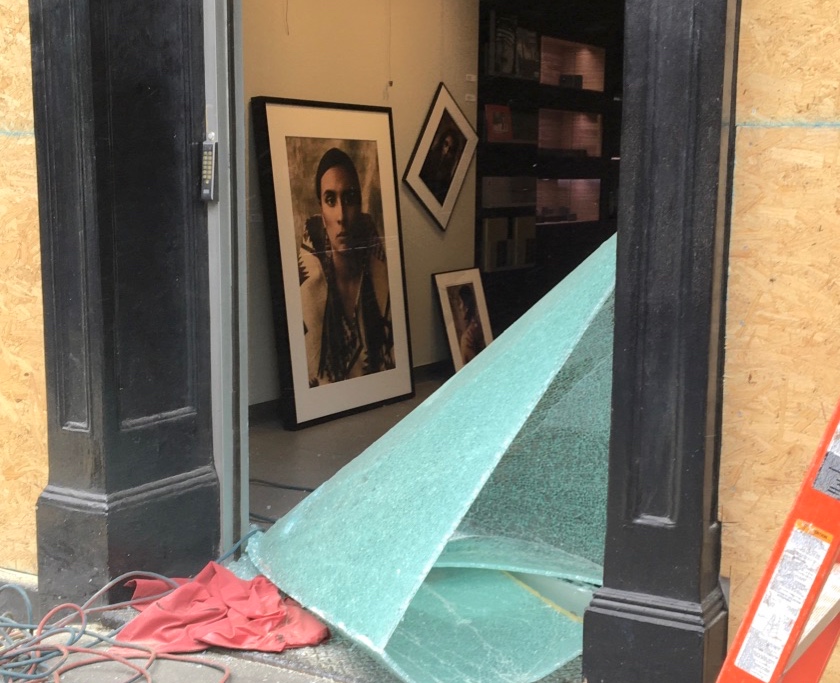 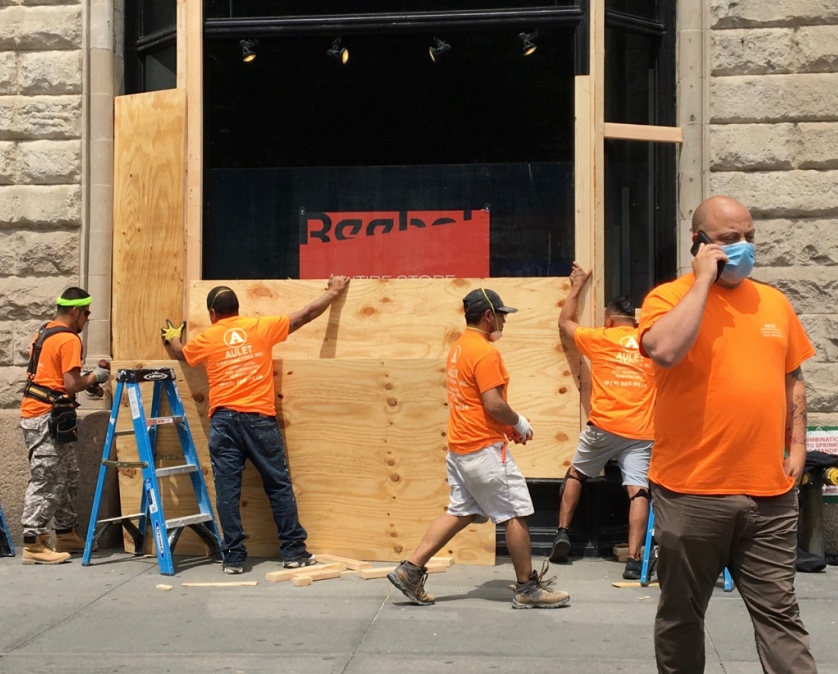 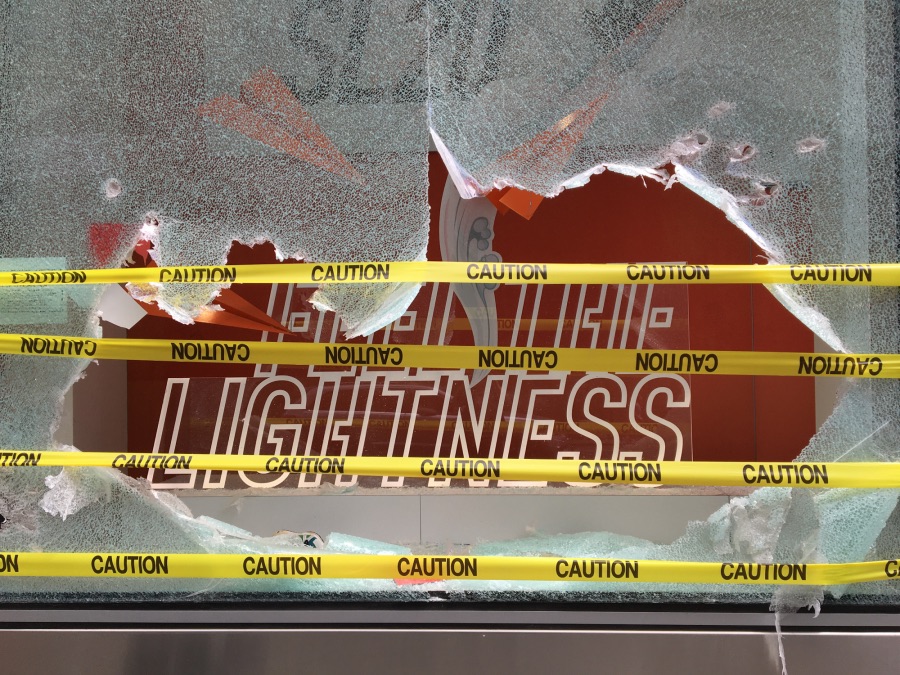 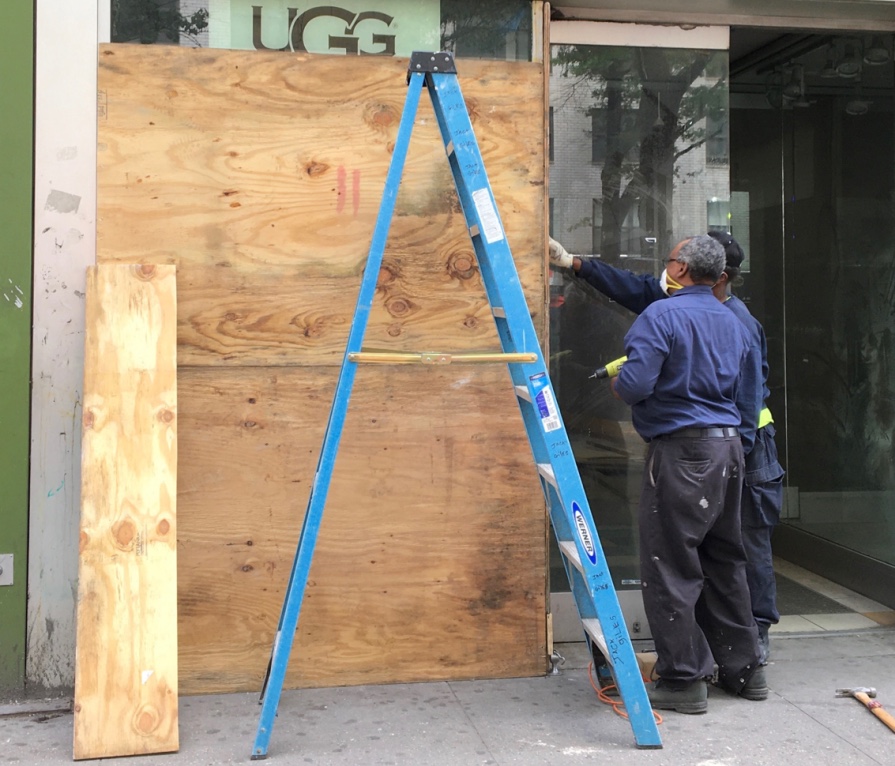 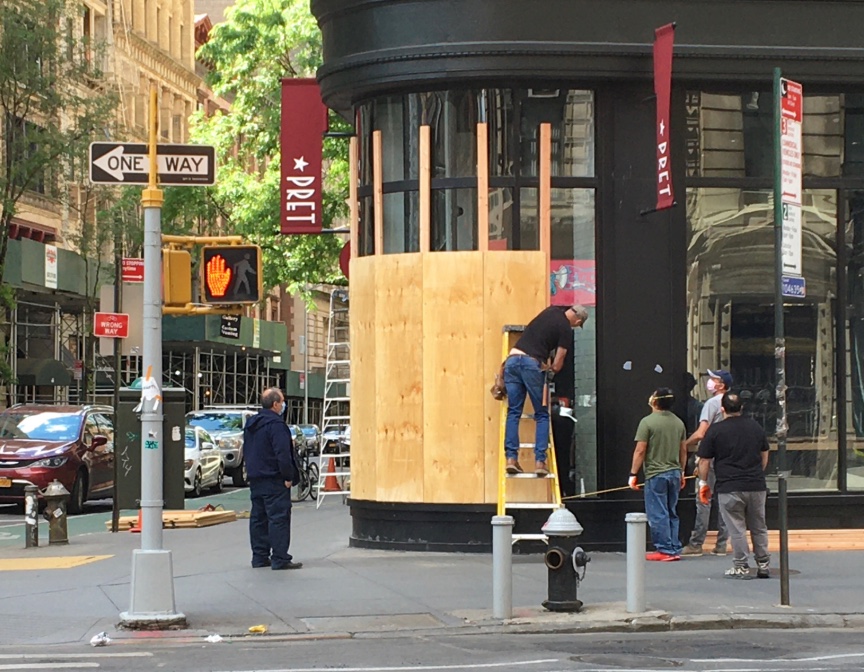 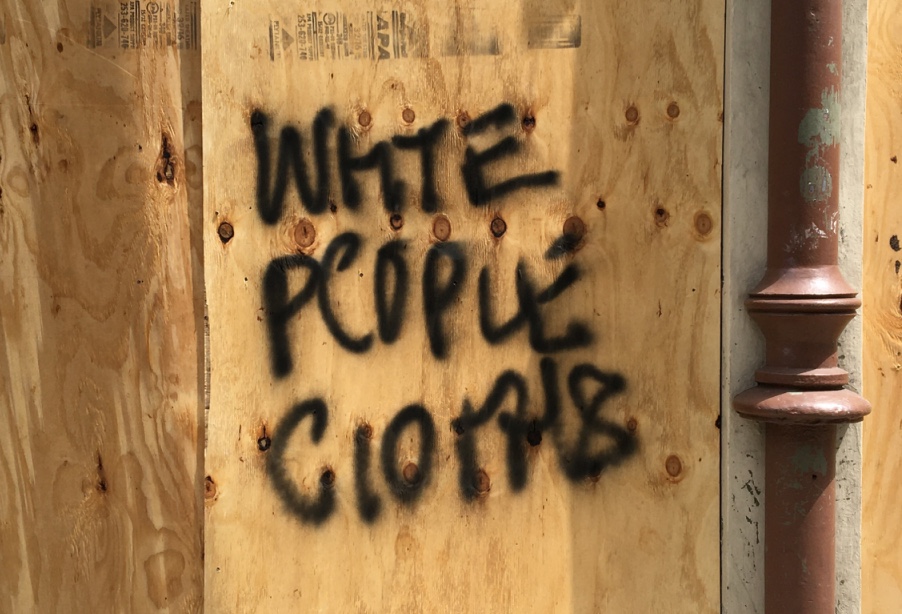 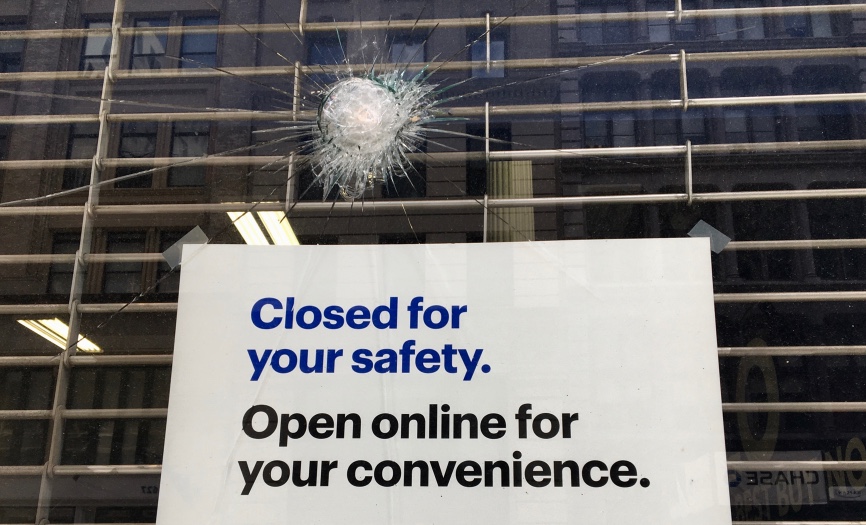