Okay, that was very cool, but we can all agree enough with the fireworks already? The dogs are suffering. 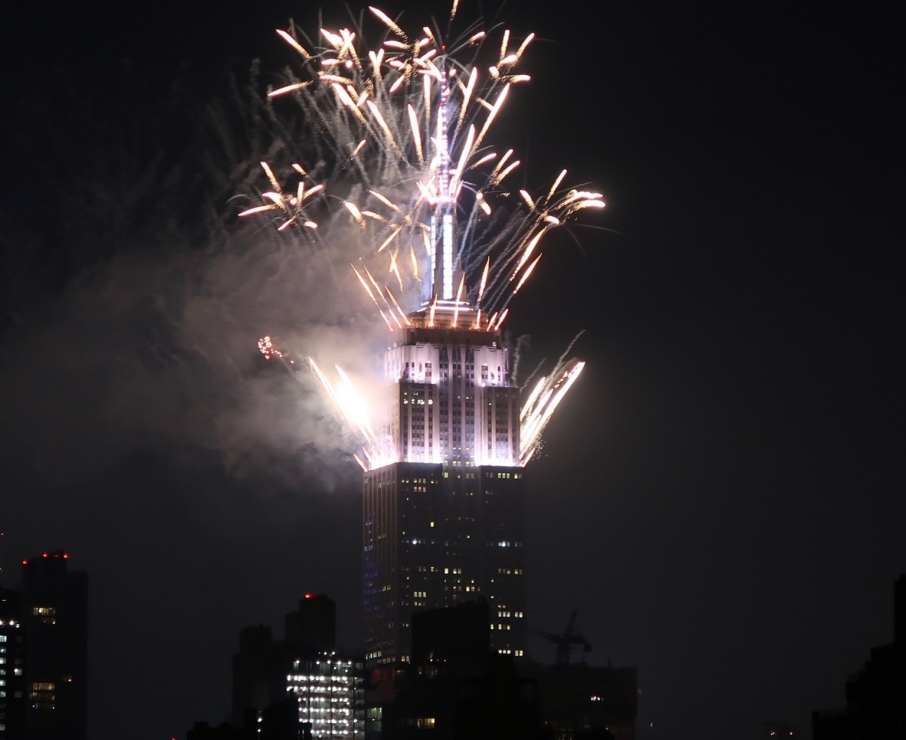 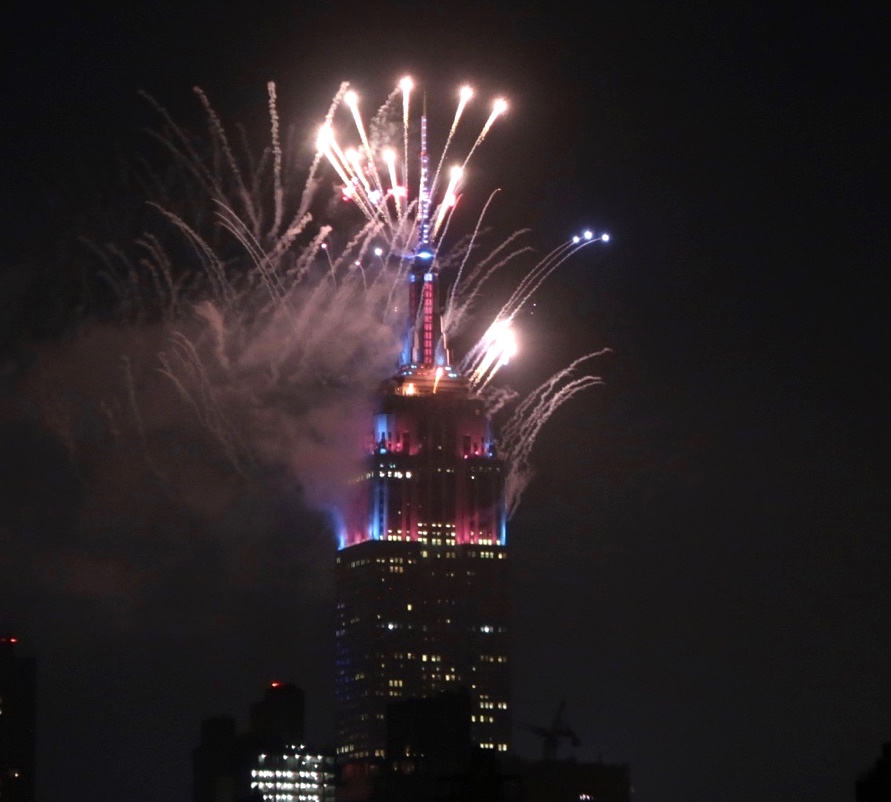 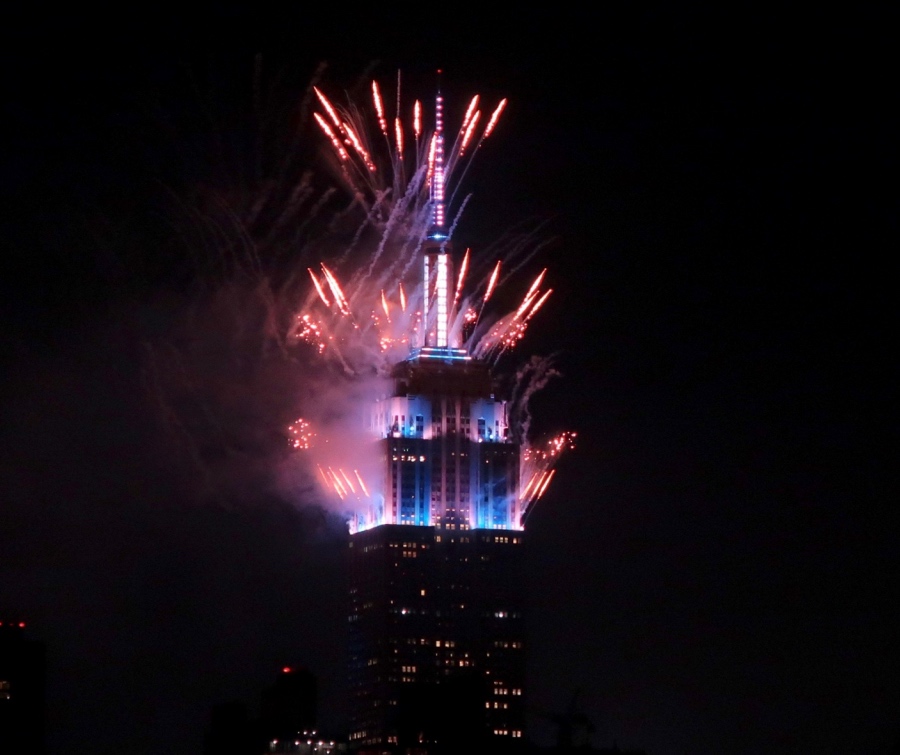 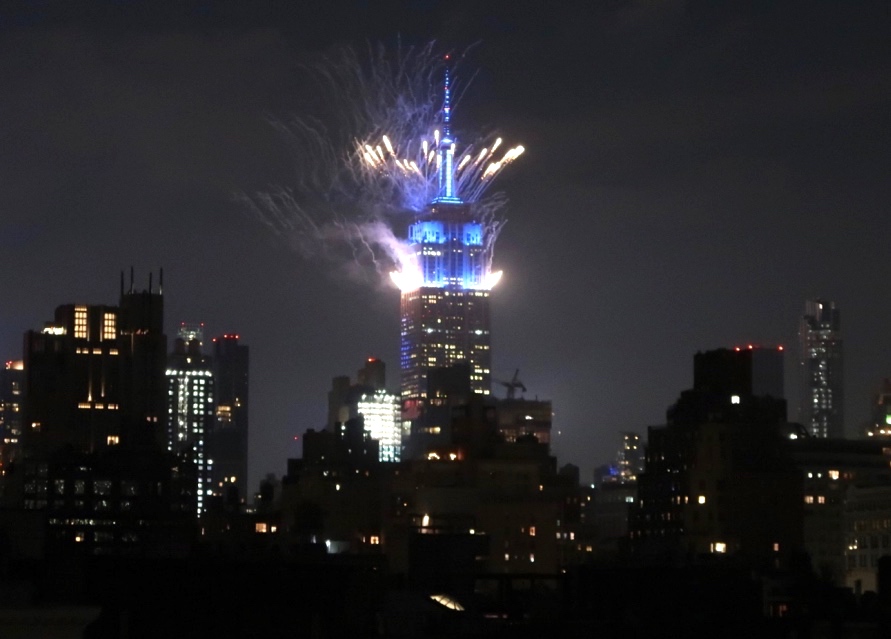 The sun was in my eyes and I couldn’t see if any of the jets had even made it into my frame! Luckily I got a few shots, and I am particularly glad that the stealth bomber was among them. The first time I saw a stealth glider I didn’t know one was going to fly by. I was sitting on the river and just happened to look up. It was the most amazing non-animal thing I’d ever seen in the sky, and the fact that it doesn’t make a sound made it even more beautiful. It was just this silent, gliding monster. 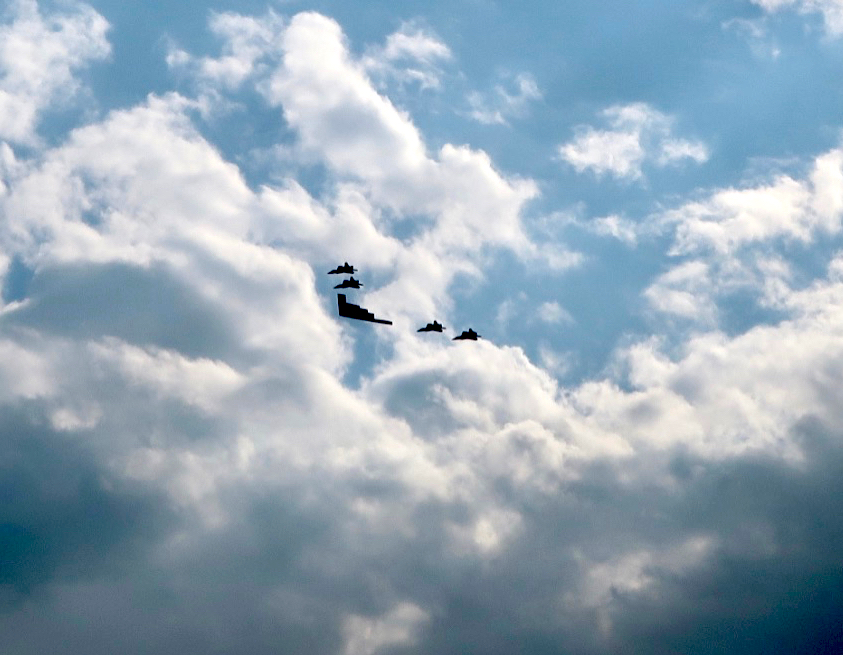 The jets were flying north to south down the Hudson River, and I believe they were heading to Philadelphia next. 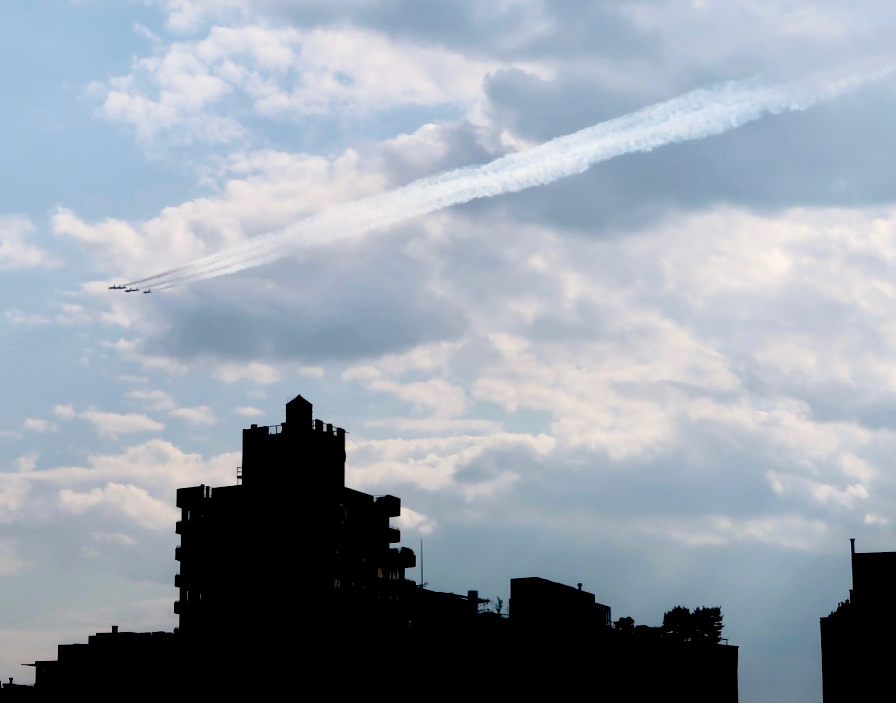 I passed this photo shoot on my walk the other day. The first thing I noticed was an assistant carrying an armful of flowers. “Damn my cats! I want flowers,” was my first thought. My cats go immediately after vases full of flowers so I can’t have flowers in my house. Bastards. Anyway, back to the shoot. I guess the assistant was holding back-up flowers in case this one wilted. 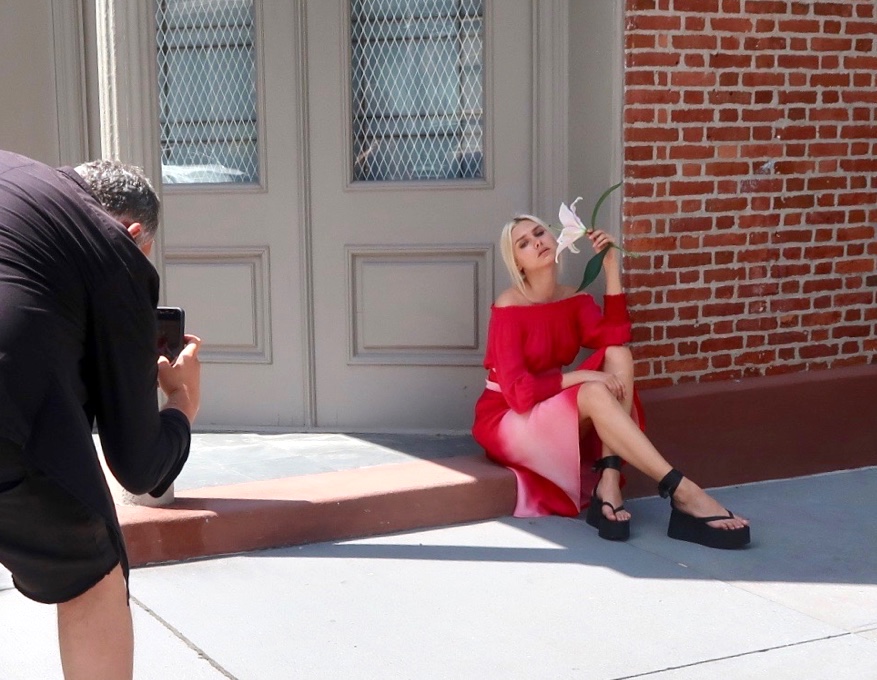 Restaurants in New York City have really embraced outdoor dining. For now, it’s the only way to eat out. New York City hasn’t okayed indoor dining yet. We’ve always had sidewalk cafes, but restaurants are adopting various methods of getting people to pull up a chair.

I liked this one because of the shade it offers. If you’re having a meal during the day, it would be unbearable to sit in the sun. But the table is essentially in the street. It may be hard to tell in this photograph, but they’ve set up this table in a section of the street normally reserved for parking. 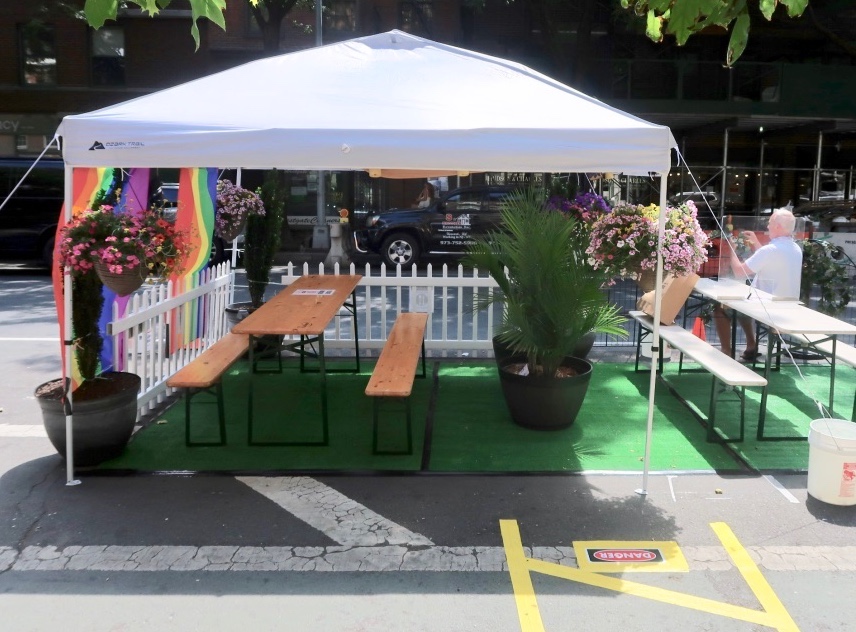 I was taking a picture of this set-up because it’s very old-world fancy, which made me nostalgic, when the waiter jumped into the picture. It was very cute and I thanked him. 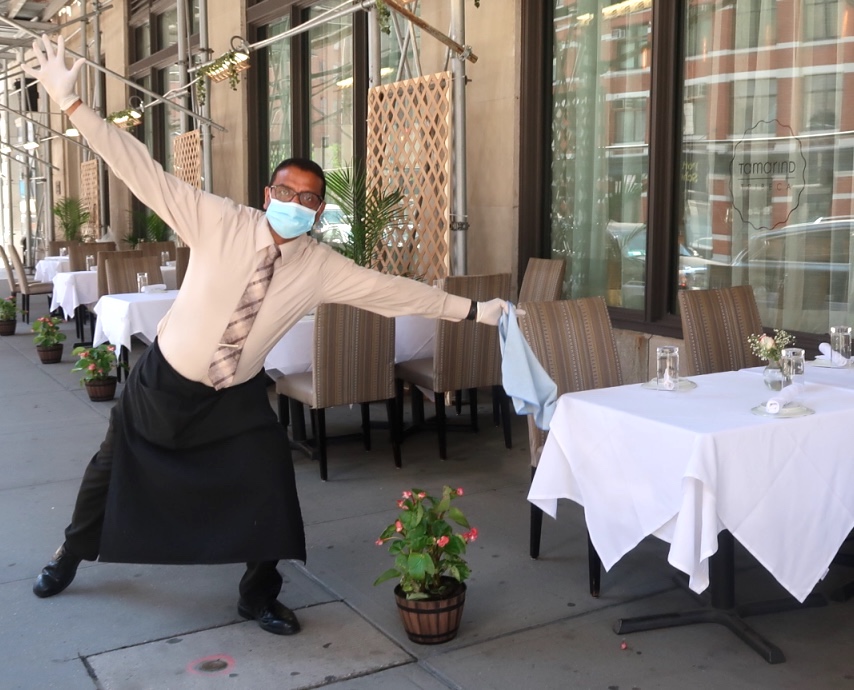 This place is just a few doors down from where I live and I could hear the music coming in my window, which was fabulous. So I went down to listen. This is a brand new restaurant and I think last night might have been their opening night, but I’m not entirely sure about that. It’s called Dante West Village and it’s on the corner of Perry and Hudson. 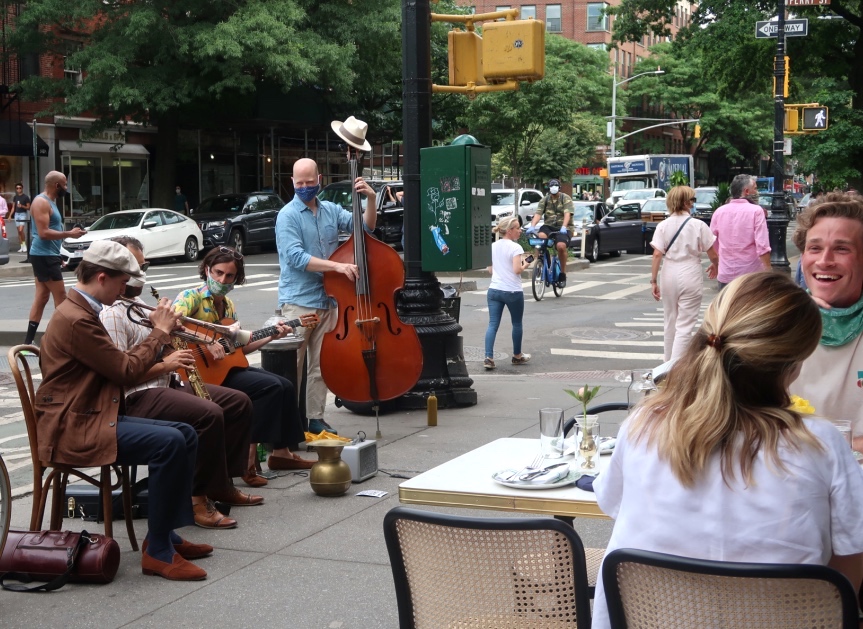 This is the set-up at the White Horse Tavern, where I will never go again as long as it’s owned by slum landlord Steve Croman. Croman went to jail for mortgage and tax fraud, and he is the reason my beloved Golden Rabbit is going out of business. The White Horse also set up tables out in the street. There’s another view below. 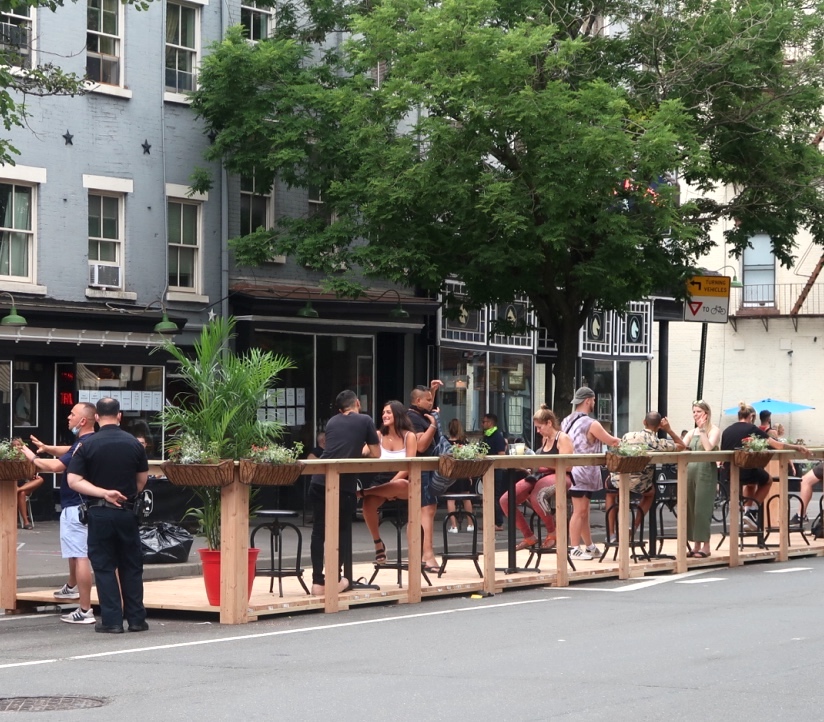 I think this gives a better idea of where they are putting people. There’s the sidewalk, the bike lane, and these people are in the parking section. 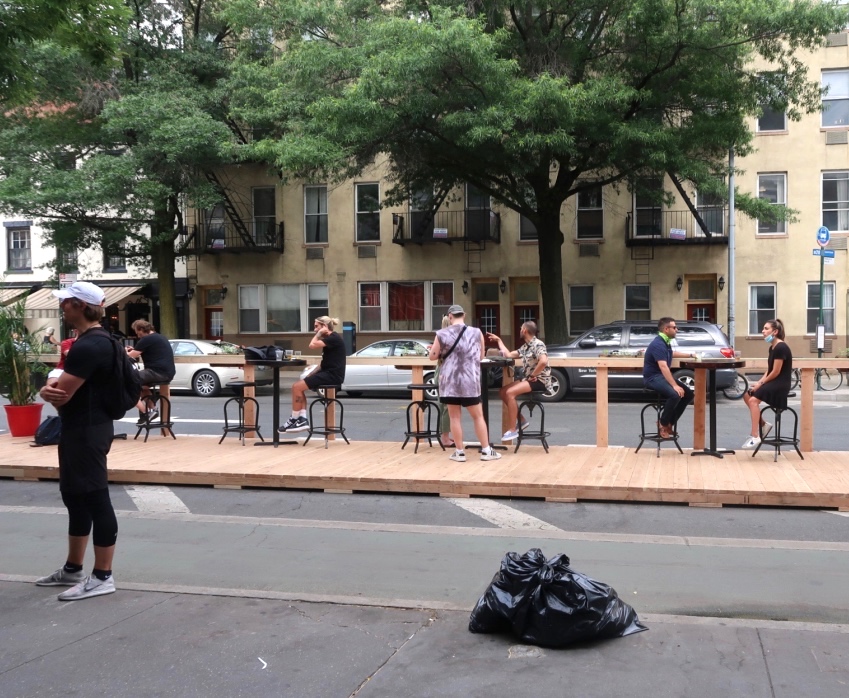 Protestors have started occupying City Hall Park. I believe today is day four. I went by on my walk today to take a look, and to take some pictures. That beautiful building in the background is the Surrogate’s Courthouse, which also houses the Municipal Archives. As readers of my blog know, this is one of my favorite places to spend time. 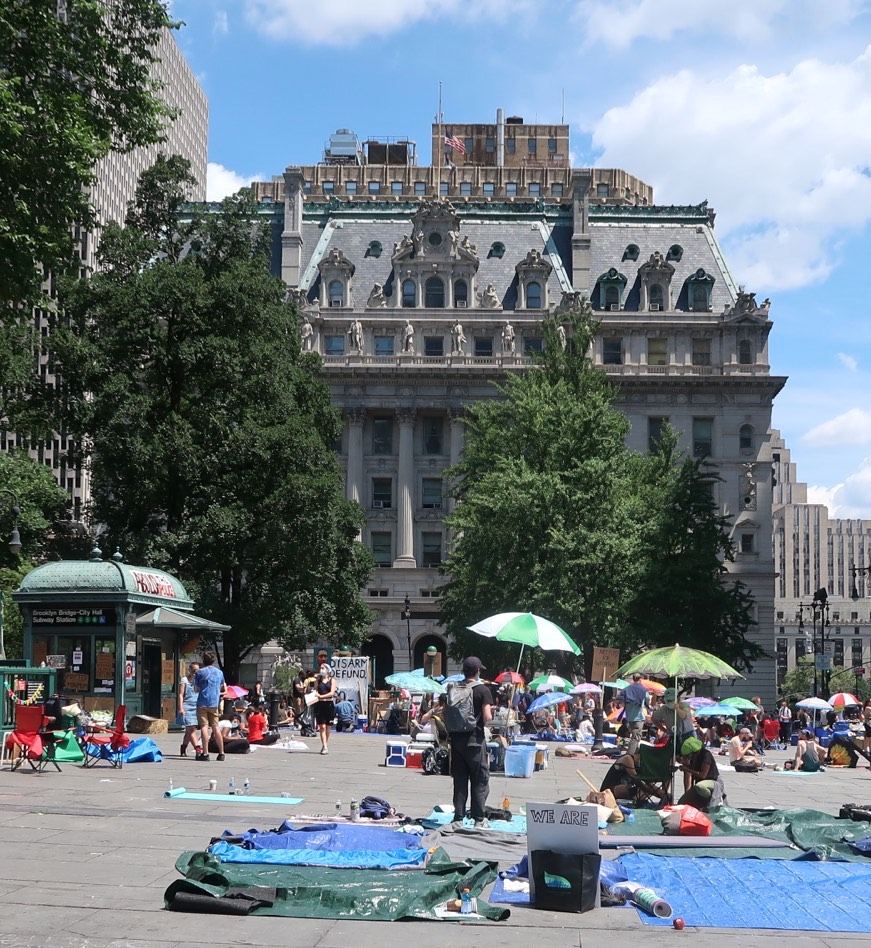 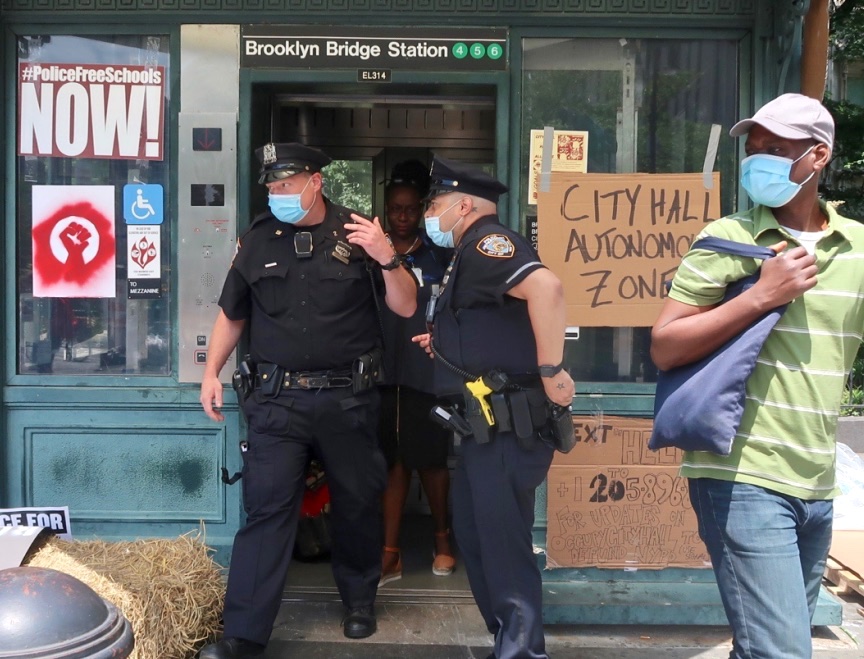 George Floyd and the Municipal Archives building. I should have talked to the protestors. Their position is extreme. But maybe they have a new vision for law enforcement. By the way, I wish these protests would include the courts, the DAs, and the Department of Correction. They are all pieces of the criminal justice system puzzle (and if you step back, there are bigger pieces that also need to be addressed) and all these pieces need major reforms. 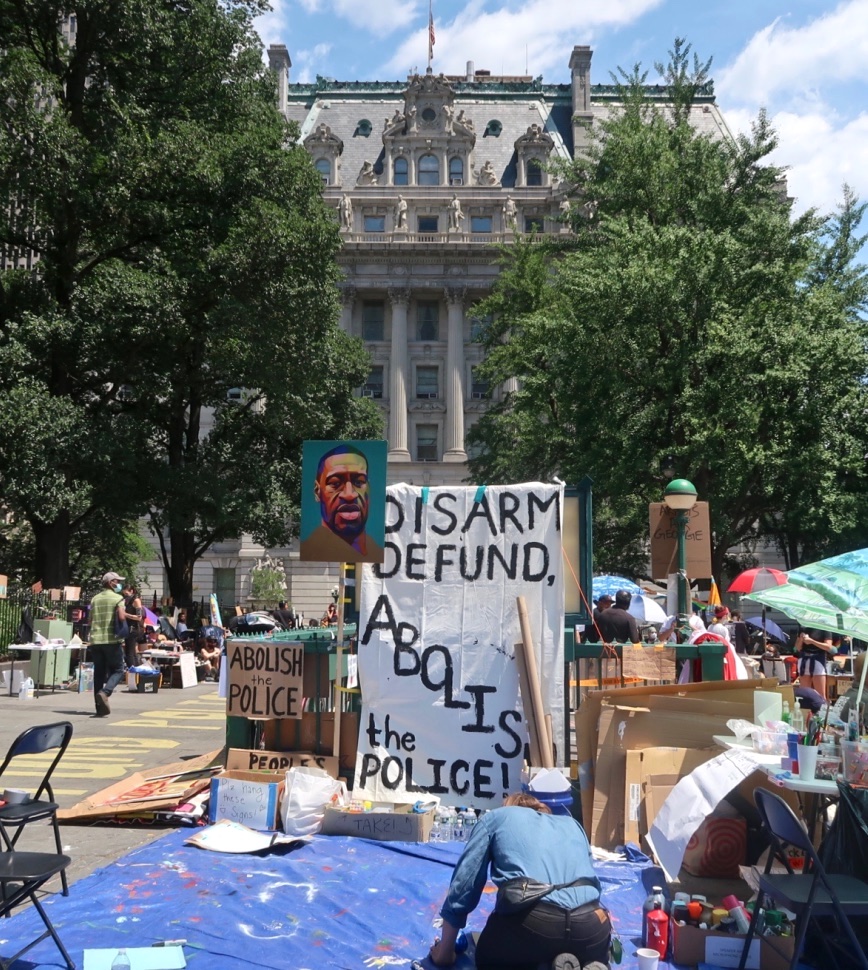 The protestor’s setup reminded me of St. Paul’s Chapel and 9/11. We had stations all along the walls, ringing the pews, and each station had medical supplies, food, beverages, and so on. All the workers and volunteers could come to St. Paul’s, and they usually could find what they needed. Same here. 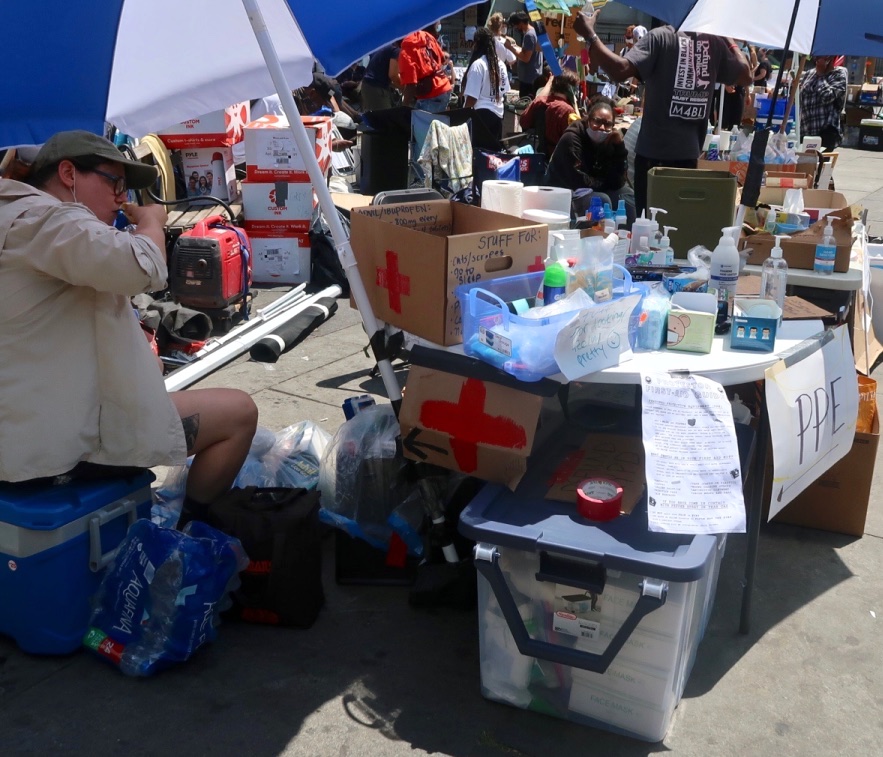 This really reminded me of St. Paul’s and 9/11. Every day we got donations from all over the world and we had to organize all the boxes and put them away. 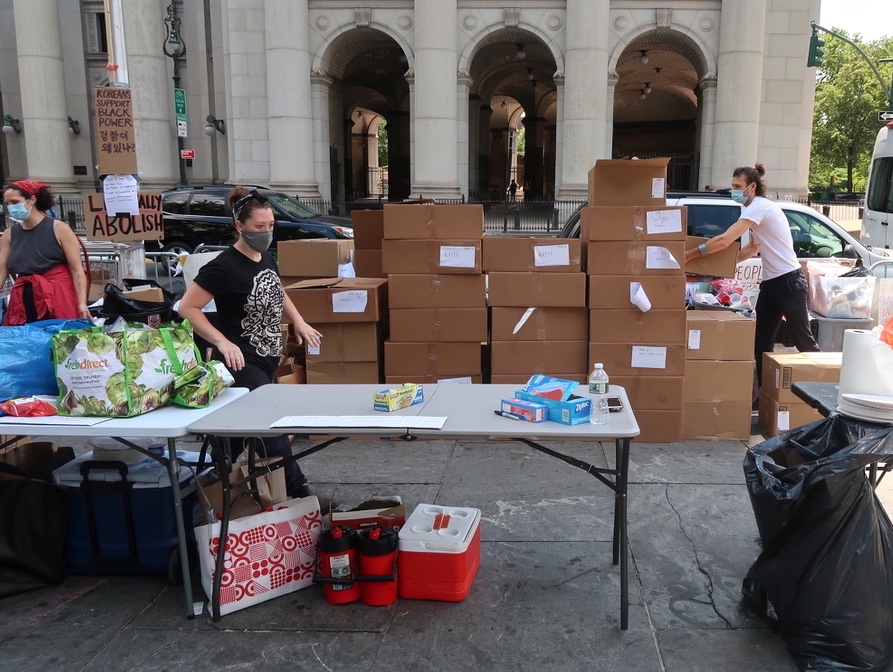 Another shot of the supplies. I wish I had gotten a better shot of the sign with the name Eleanor Bumpurs. Decades ago I saw an interview with Spike Lee and he was talking about Eleanor Bumpurs. I’d heard the story when it happened, but I hadn’t given it any thought at the time. But the way Spike Lee talked about it made me research her story. It was the beginning of having my eyes opened to the fact that we weren’t handling situations like hers well, which led to a gradual awakening to many other problems. 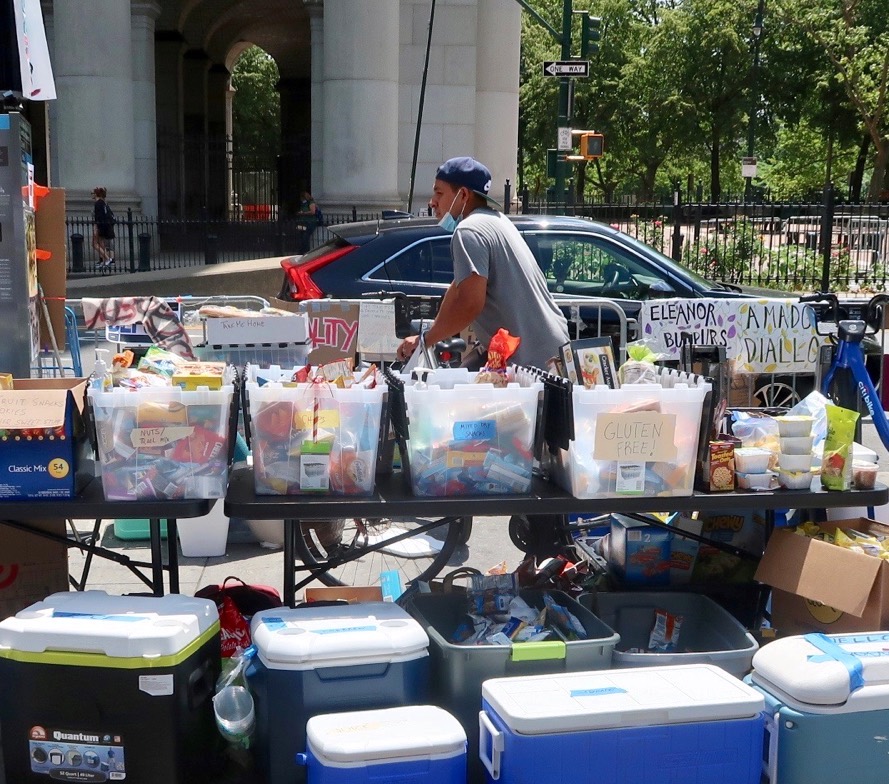 The protestors are camped out at the park, and this is where they sleep. 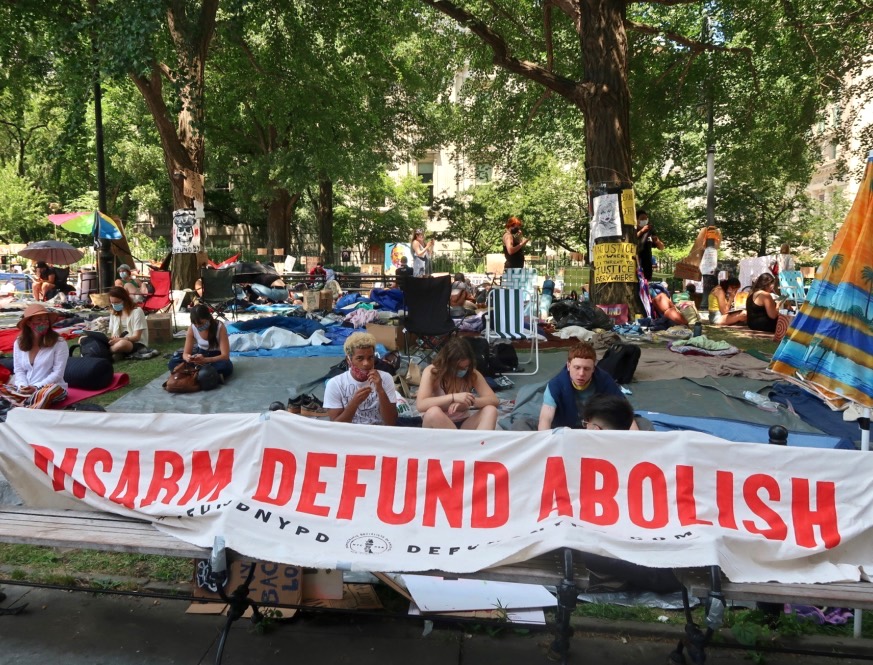