Last night 14 museums downtown were open for free between 4 and 8pm. My goal was to get to 10. I made it to 6. My downfall was deciding to stay for a lecture about Teddy Roosevelt at the National Archives, but I don’t regret it. The guy giving the lecture was fabulous.

I didn’t take pictures at each museum, so this is just a taste of my night. My first stop was the African Burial Ground Museum. One of the more poignant objects for me was this ring. 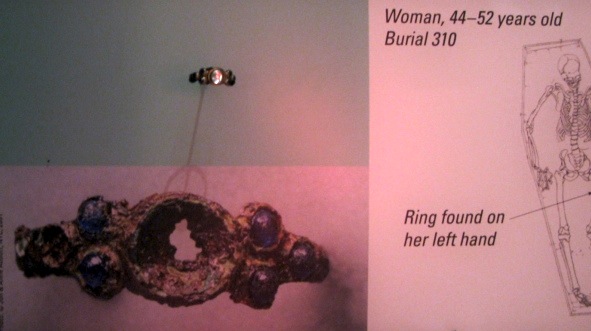 This is a picture of all the burials they uncovered. It’s very sad up close because there were so many children. 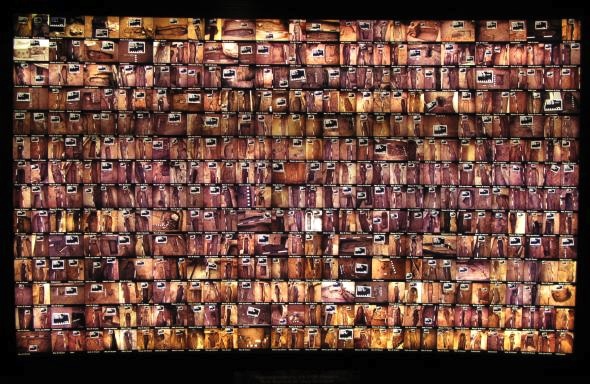 I took this at the Federal Hall National Memorial. It’s a picture of part of a locking mechanism inside one of the vaults (this building used to be the Sub-Treasury). I couldn’t get over how beautiful they used to make utilitarian objects like locking mechanisms. Sob. 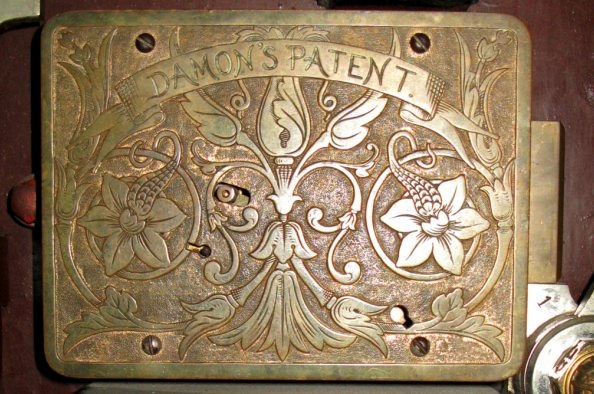 This is looking out the front door. That’s a statue of Washington, who is overlooking Wall Street and the Stock Exchange. 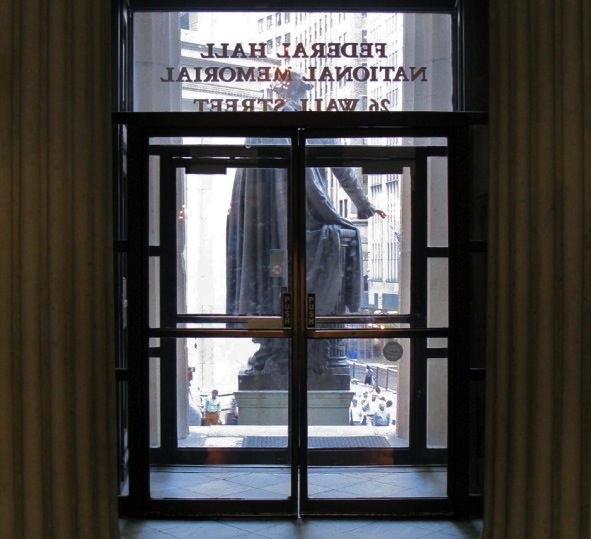 Now I’m outside, looking up at the statue and the skyline. 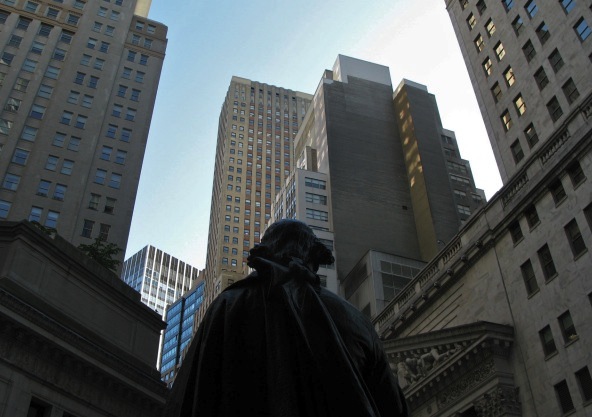 And now we come to the National September 11 Memorial Museum. I found out that I can go for free anytime I want and I don’t have to wait in line! So I should have come back another time, but I was there.

This is a picture of a picture, and of me taking the picture. I almost burst into tears when I saw it. It just made me remember what it felt like back then, when wave after wave after endless wave of people arrived to help in any way they could. Someone from France spray painted this down at the site. Thank you Paris, France. 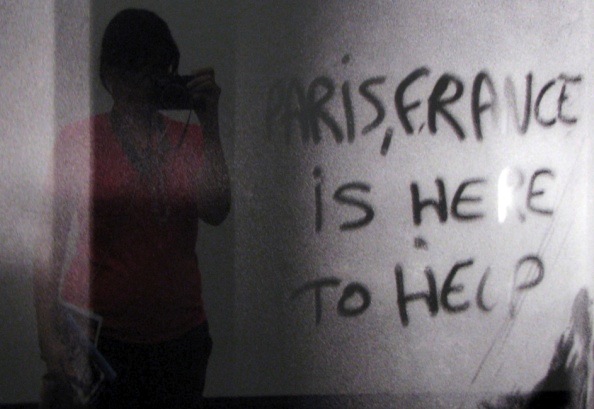 One of the WTC beams, covered with signs and mementos from the various recovery workers. 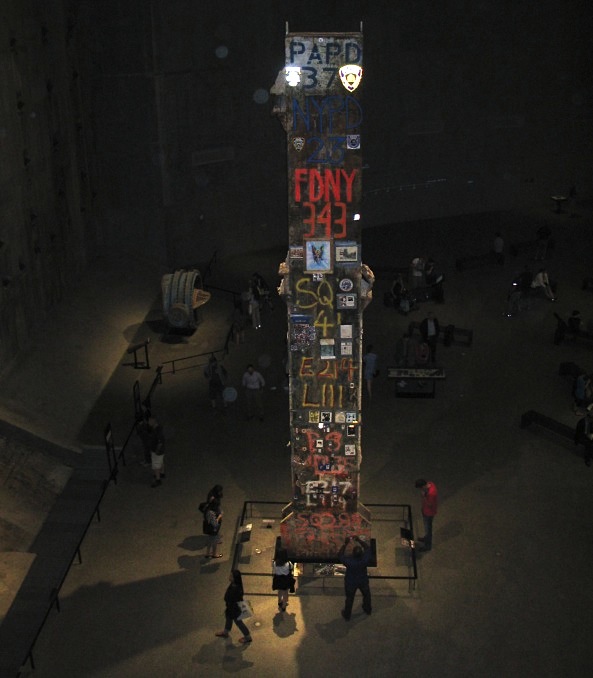 I wasn’t aware that someone from the Office of the Chief Medical Examiner was there before the towers came down, but clearly someone was. 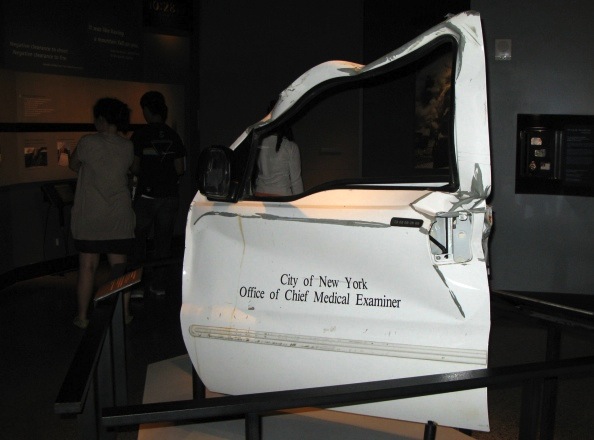 I kept scanning the photographs for a face I recognized but I didn’t come upon someone until the end. That is Dr. Arthur Gudeon below, a podiatrist who volunteered down at St. Paul’s Chapel. He is the sweetest guy in the world! The picture of him sits in front of one of the pews from St. Paul’s. Those scrapes are from the recovery worker’s gear. We cherished those scrapes.

The pews have since been removed from St. Paul’s, something that upset a lot of people. I was okay with it. I like the open space they have there now.

The other museums I was able to visit: The Anne Frank Center USA, the National Archives at New York City, and the NYC Municipal Archives Visitor Center. Thank you Lower Manhattan Cultural Council, Downtown Alliance and NYC & Company! Oh, this was also part of the River to River festival (I posted earlier about a group sing I participated in that was part of this festival). 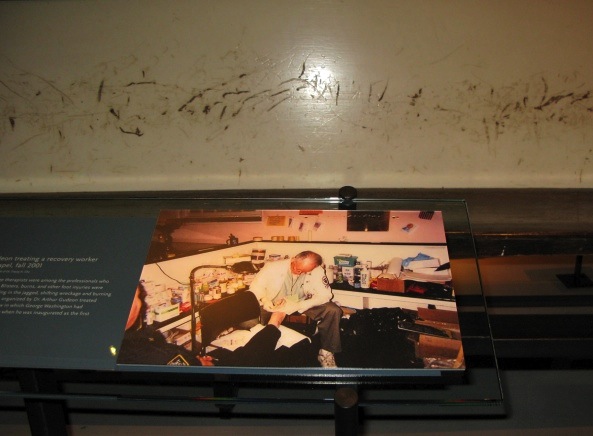 I’m going to this event tonight. I really can’t wait. For four hours, 14 museums downtown will be free to visit. I don’t see how I can make it to them all. I could skip the ones I’ve already been to, but that would take away only 6. How is it possible that there are so many museums I haven’t gone to?? And besides, I don’t want to skip those. Some I haven’t been to in a long time. And even though I go to the Municipal Archives a lot I can’t skip them! I love them!

I just did the math. It’s simply not possible to go to them all, alas. I subtracted time for walking, and that would leave me a mere 13 minutes at each museum. My new plan: I’m going to try to make 10. Wish me luck!

A restaurant sign. Where was I? 23rd Street, I think. 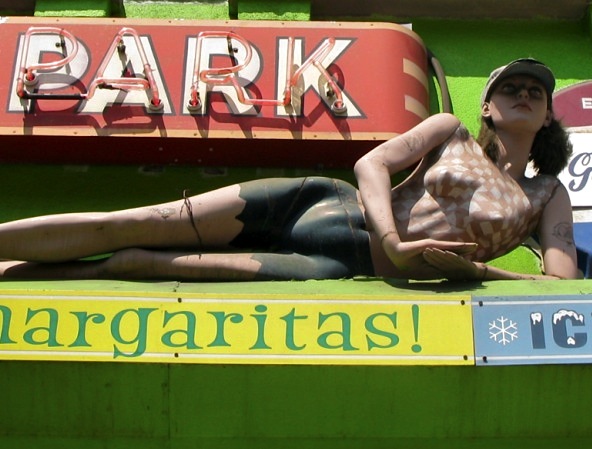 I’ve been worried about Alzheimers recently and there was a piece in the Times with a link to these standardized tests. I took the first one, but they said it doesn’t matter which one you take. Each is different but they all test the same things. I did so badly on two of the questions I’m taking it to my doctor to discuss my results. There isn’t an answer sheet, because they aren’t so much about right and wrong, but if you try one of the tests you’ll see how each question would indicate if there’s a problem.

Art on a fence on 11th Street. I was wondering yesterday why I don’t paint, just for fun. Because it is fun. I’m more drawn to pottery though. I’ve never gotten over the dazzling affect of what happens when you paint a pot, put it into a kiln, and out comes this magical, shiny, brilliant and colorful treasure. 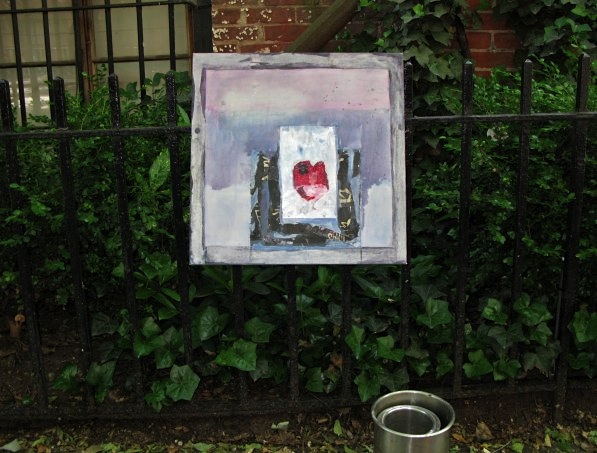 Nothing like singing in the streets. About death. Today I took part in what was called the first “synchronized headphone choir.” Each voice part started out at in a different part of the city, and we headed towards Battery Park, singing our part. It was a beautiful piece written by composer Pete M. Wyer, who also conceived of this whole thing.

Everyone downloaded an app and we counted down and hit play at the same time. Except I don’t have a smartphone, so I was using an old ipod which I actually had to abandon, because I wasn’t synced up with everyone else. 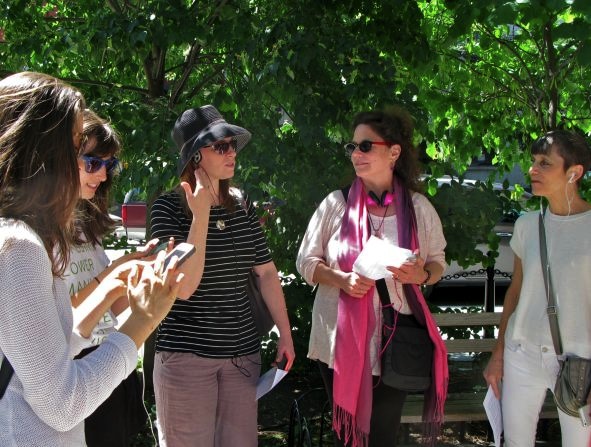 It was a little tricky singing and walking at the same time, because you couldn’t walk in rhythm to what you were singing. It felt great anyway. 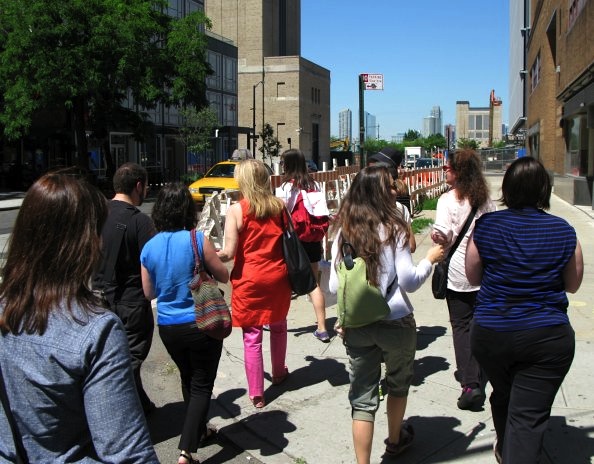 We’re at Canal and Spring, waiting to cross the street. People took pictures of us as we passed by. 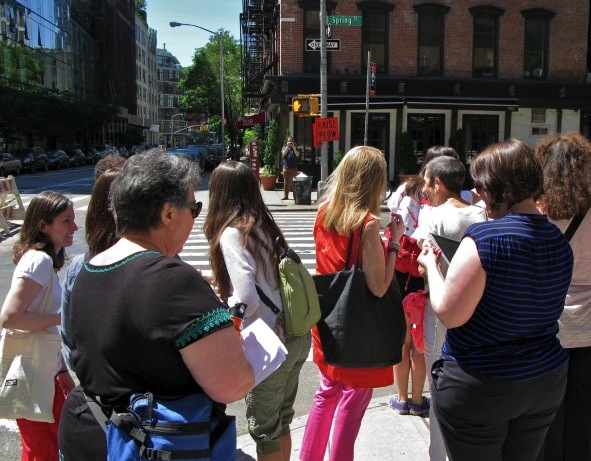 That’s the finished One World Trade Center in the distance. 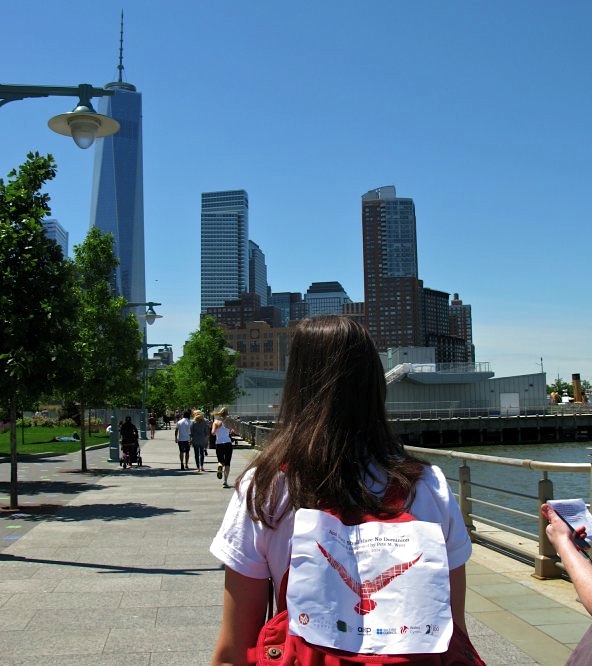 When we met up with the other parts and sang together, it was glorious. I immediately moved from my spot within the sopranos and stood next to the altos. My choir sings with the voice parts all mixed up and that’s what I prefer now. It’s more fun to sing that way, with different voice parts all around you. You feel the harmony more, and you can also hear the piece as a whole.

I didn’t get a shot of the entire choir singing because it felt so good I didn’t want to sacrifice a single second of it to take a picture. That is Pete Wyer with the guitar though, afterwards.

Thank you Pete Wyer and company, and Make Music New York! I had a fabulous time. 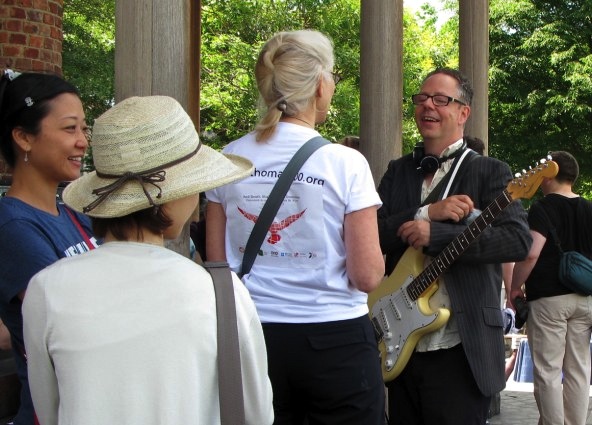 Bleecker joins a long line of wonderful cats who have sat in this window, staring at birds, longing to kill them. Don’t worry bird. Sorry Bleeck. 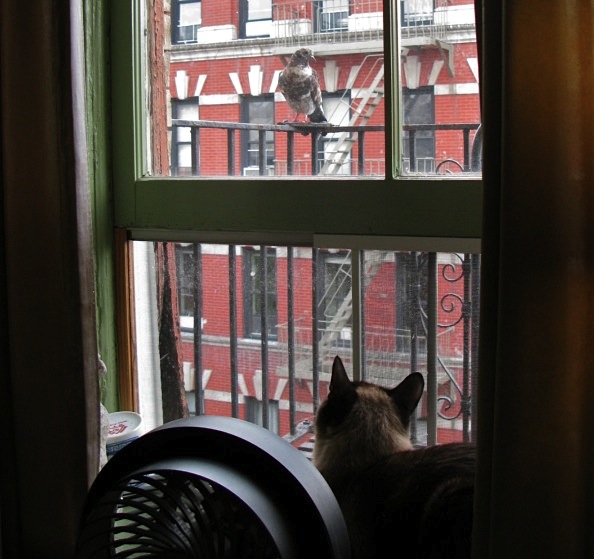