I just heard about a documentary titled What Would Beethoven Do? From their website:

I’ll be curious to learn about what various people are doing. I know they interviewed Britlin Losee, a composer I’ve written about.

I did want to point out though, that you always hear that the audience for classical music is small and shrinking. The producers of this documentary make this point in their trailer. But when I was researching my singing book I learned that the National Endowment for the Arts, who has been measuring participation in the arts for close to three decades, found that “nearly 75 percent of adults attended arts activities, created art, or engaged with art via electronic media.” This was more than twice the percentage of adults who went in-person to concerts, plays, the ballet, or museums. And of all the art forms people were involved with via the internet and other mobile devices, classical music was the one they were engaging with the most.

That doesn’t exactly refute the point about classical music, but maybe it does, and it certainly indicates that things are already getting better. I still want to see this documentary though! I know I’m not up on all that’s going out there in the world of classical music.

People hanging outside Gallery Ho, where my friend Marianne Petit currently has a show. (For the record, there are a lot of galleries in this building, in addition to Gallery Ho.) 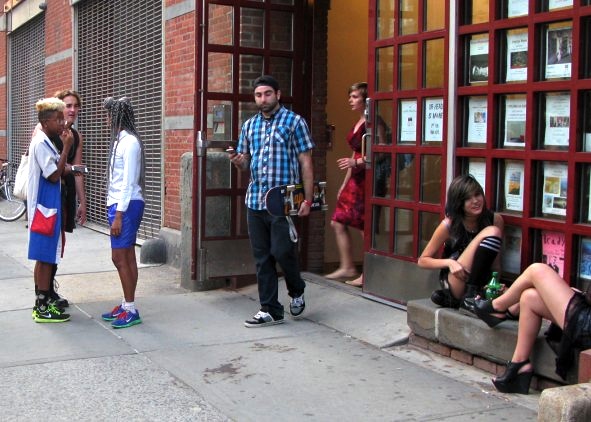 When Did I Become a Science Nut?