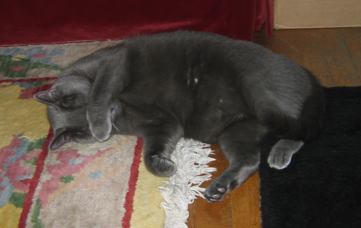 “Cuppa tea, cuppa tea, put a picture of a cat up on my blog, cuppa tea.” Buddy is not so fond of the camera, shots of him sleeping is the best I can do. But what a cute sleeper!

Let’s see, Iraq is falling apart, Israel is going to keep bombing, but nice to see you Condi, North Korea and nukes, Iran’s working on it, what else? Oh! Thursday I’m having a “procedure,” won’t mention what, it’s too gross, but it’s the one they insist you have at this age, where you can’t eat the day before (hint, hint). God help me. Personally I think this is proof God hates us, if there is a God. He’s just up there laughing and laughing.

So today’s Hide Me post is for Buddy and me. Please hide us. 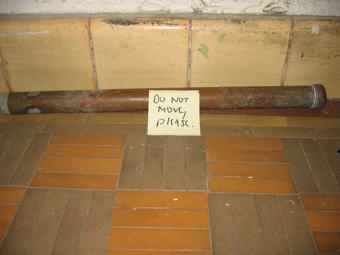 It took me TWO days to figure out the reason why my cats were suddenly so interested in a pipe in the bathroom was because there was a mouse in it.

I was going to shake the mouse into the toilet and flush it, but thank God I realized the poor thing might still be alive.

So I put the pipe in the hall with a note to my neighbors, hoping the mouse would be gone when I came back and HE WAS. So today, I saved a mouse, which felt really good. 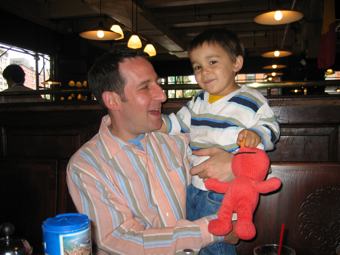 Then I met my friends Gary and Diana and their son Justin for brunch.

(Chris, I had eggs benedict, which came with the best french fries, orange juice and a fruit salad.)

That’s Justin with Elmo. Justin knows that Mercury is the closest planet to the sun and can count to ten in Japanese. 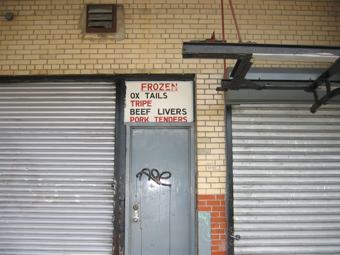 Then we walked around my bizarro neighborhood, which used to be all this.

But now right next door to this … 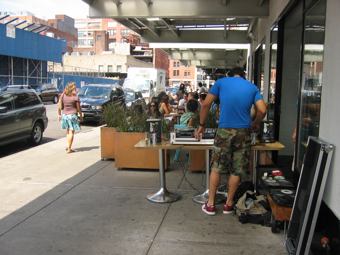 … is an outdoor cafe and a DJ. Weirdly, this is not as bizarre as to me as the transformation of Bleeker Street, which is now all designer shops I think I mentioned. I live a half a block from two Ralph Lauren boutiques and three Marc Jacobs, just to give you an idea.

Although I guess the meat market which used to be, well, meat and transvestite and transsexual prostitutes, turning into one of the most expensive places to live in town is kinda strange, too.

It’s been true for years and it still gets me every time I walk through. (I don’t live in the meat market area, but next to it. My exact neighborhood is SO pretty.)

After that I met Howard in Union Square and I helped him with his book stuff for two seconds and then we spent ten minutes at least on mine.

Jackie, me and Brett. Chris says I should name the restaurants and what I had. I no longer remember the name of where we ate yesterday. It’s a Japanese restaurant in the Hotel Gansevoort. They didn’t have a vegetarian entree so I had miso soup, and … the Japanese equivalent of shish kabob with vegetables instead of meat. If it wasn’t for dessert I would have cried, but dessert and the company made up for the lack of food choices. 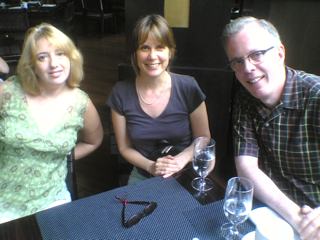 We were talking on Echo about the fact that when you’re single it doesn’t really pay to cook. It ends up being as expensive and sometimes more than doing take out. Which kinda sucks, but I also feel like it takes me off the hook for cooking. And there are so many great take-out choices here.

I’m happy because the M. Night Shyamalan movie opened, and I do love his movies. Have I mentioned that everytime Signs is on I have to watch it? I’ve seen that movie 16 thousand kabillion times. I don’t even believe in the message of the film — in fact I get furious during one scene. IN FACT, I would like to get this off my chest.

Mel Gibson and Joaquin Phoenix (who I love) are sitting on the couch. They play brothers. Aliens have landed, and it could be bad, they don’t know yet how it’s going to turn out, but Joaquin is scared and he’s looking for comfort from his brother, who used to be a priest.

I fit into neither category. I don’t believe in God, but I think things happen usually because of a reason, it’s just that the reason has nothing to do with God. It has to do with us. Things unfold because of our actions. Could be good, could be bad, who knows, we’re not that smart or organized. I hope for the best. (I also believe there are accidents, things that happen that have nothing to do with us, but effect us. Like if a meteor hits us, or hurricanes, unless it’s a result of something we did to screw up the climate). BUT in any case the idea that we are alone and God isn’t directing everything doesn’t fill with terror. Instead, it fills my life with meaning. Because it means that the world is what we make it, not what God makes it, and everything I do is important. It’s up to us. We’re all we’ve got.

Like the character Angel says, “the smallest act of kindness is the greatest thing in the world.” (And the smallest evil is the worst.)

Though, I will admit the “death is the end” thing which I believe, kinda sucks. So, I hope that ends up not being true.

I think I figured out why I find Signs enormously comforting. Everything works out well in the end. People who believe in God think it’s because God set it up that way and that fills them with comfort.

I think it’s because in spite of the fact that we’re idiots and frequently fuck up, things can still work out okay, and that fills me with comfort, too.

It’s good to know that people like the guy who made this film exist in the world. Stay for the credits, which were sweet.

I spoke to Mrs. Kremen, who was very nice about it, but even now, can’t bear to talk about it, so she didn’t want to talk to me. His birthday is this month, too. Oh, it was awful. There are some things you just don’t recover from. This poor woman. She blames herself, for moving the family to California. (She’s from Brooklyn.) She has another son, but she said her life was ruined from then on. She was 37 when it happened. So I apologized and got off the phone. She wasn’t mad, she just didn’t want to go into it. She did say that the psychics they consulted were a nightmare. Ugh. I felt terrible. I can’t believe the things some people have to endure. Life is not fair.