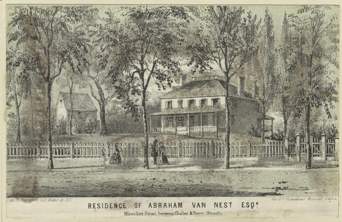 This is a block away from where I live, 152 years ago. Technically, time travel is possible, according to physicists. If it’s possible, it’s already happening then, right? But it must be only the people in the future, getting to travel around. Maybe they are watching us now. Not us us, because what are we doing that’s so interesting? But they could go back to 9/11 and study what happened. They know all about what Jesus really said and if he married or not. History is their theatre. The biggest business of the future will be going back to record what really happened, and finding the best things to watch — no! Developing the best search engines for the past. Right??

Heading Back up to the Library

3 thoughts on “I Want To Travel Around in Time”