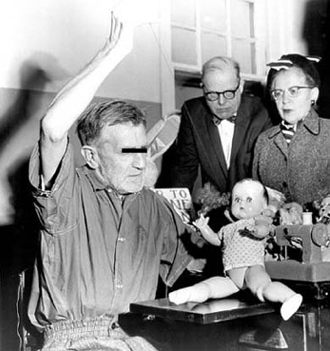 This is a 1950’s picture of Hart Island Warden Edward Dros and Commissioner Ann Kross watching an inmate mend a doll that will be given to needy children at Christmas. Hart Island is where New York maintains a Potter’s Field. At the time there was a prison on the island, and the prisoners dug the graves. The prison is now closed and they bring inmates in from Rikers to do the digging. (They like the work. It gets them out of the prison.)

I wrote about this picture in Waiting for My Cats to Die. I know everyone meant well, but I felt bad for the old inmate, who looks as frail as the doll, and the poor children who would be receiving the second hand gifts.

“A Daily News photographer took pictures for a story they ran in the 50’s. Men in suits and a woman in a nice hat pose with the inmates as they work. They’re all very proud.”

And then I describe that picture in particular. “… they hover over an old inmate struggling to sew a dolls dress back together. She’s missing a foot and three fingers on one hand and even if that prisoner manages to fix the hole in the dress (badly) she’s still going to be an old doll with no foot and missing fingers and do they really think some little girl is going to be thrilled to get her? Although I can see a child loving the doll in a misfit toy kind of way.”

The picture is from the wonderful website of the New York Correction History Society, maintained by Tom McCarthy. This is their Hart Island page. There’s a treasure trove of information about the history of Hart Island there, and stories of people who search for their friends and relatives buried on the island.

Alternate plan: All of the above except the writing and working out parts.

The More Dark and Cavernistic the Better

What the hell, Penn State?