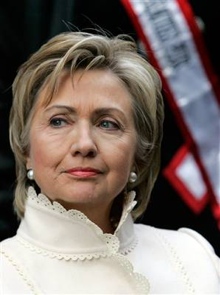 I want to respond to Bush commuting Libby’s sentence by telling a story about why I like Hillary Clinton.

I used to work as a telecommunications analyst and by the 1980’s I was working for one of the largest companies in the world. When the corporate telecommunications department of this company had meetings, it would be me at a conference table with a bunch of men in suits. I was the only female. Whenever I got up to speak, which was rarely, it was always to propose an idea to a long line of unsympathetic faces. I knew it was time to leave when I couldn’t convince them that the internet was this great thing and a project that I had initiated to demonstrate this failed. Not because it wasn’t a good idea, but because they were more interested in proving me wrong than giving a potentially useful thing a try. I know that sounds bitter, but I’m not. I only wish I understood human nature better at the time.

When Clinton first took office I watched Hillary on TV, trying to propose and defend her health care plan, facing down a room of disapproving men. Maybe her plan needed work, I don’t know, but they were clearly more interested in proving her wrong than honestly studying the merits of her plan or even the need of a plan. This wasn’t about what was good for the country. They really went at her and I felt for her. I had only been subject to the derision of one conference table full of men. She was facing down congress AND on national TV. She handled it with such grace. I’ve been on her side ever since.

WHICH REMINDS ME. Gore saying he invented the internet, which he never actually said. The truth is, his role, and Clinton’s, actually was crucial and shaped the blogs, and the Facebooks and the YouTubes of today.

After I left the company I just described I started an online service called Echo. This was 1989, and except for the people who developed it and the college students and computer geeks (like myself) who used it for email and exchanging computer programs, few people had heard of the internet. I couldn’t get anybody to invest in my company because I couldn’t convince anyone with money that the internet was going to be big. I ended up putting my entire life savings, such as it was, into Echo.

No one knew what a modem was. To get people online I literally had to go around and tell people one-by-one what they were, then convince them to buy one, and then how to install it, and finally how to use the commands to navigate what was then a completely text-based interface. There were no graphics, no websites as we know them today, no pointing and clicking. I didn’t have enough money for any kind of real marketing compaign and getting customers one at a time is not enough to sustain a business and Echo was in danger of going under. I was young and scared and running out of ideas. Starting a business is kinda like starting a family. You put your entire heart and soul into it and you don’t want to lose it. You want to see it thrive.

Then Al Gore (and Clinton) started talking about what they called “The Information Superhighway.” Again and again they explained in clear terms how cool the internet was. Everyone started talking about it. All the newspapers started writing about it. It was everywhere. And soon everyone was asking, “How do I get on this highway?” I was able to say, “Here!” Not only didn’t Echo go under, but a lot of people started experimenting and innovating and you know the rest. Ebay! It would have happened eventually, but I’m telling you, it would have been delayed at least two presidential terms. And in those two terms a lot of start-ups would have gone under, and the people who had room to innovate wouldn’t have even begun, so who knows how long that delay ultimately would have been and what it would have cost us.

So to all those people who smirk about the Gore inventing the internet thing, he didn’t event it but he put it on the map and you don’t even have the integrity and good grace to acknowledge the gift I’m guessing you’re using and benefiting from.

Bush’s actions are not about what is good for the country. Commuting Libby’s sentence is not about seeing justice served. God, I feel such despair when I see what we’ve come to and what counts for vision today.

Face them down again Hillary. I’m guessing we both understand human nature a little better now.

I Liked the Chilly Day