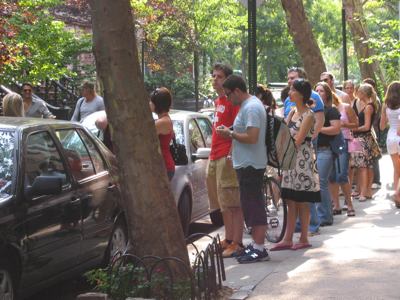 I live a block away from where they used to shoot the outside shots for Carrie’s apartment. There’s a regular tour and people line up to take pictures of themselves and their friends sitting on Carrie’s stoop. I just passed these people a few minutes ago. There were a couple of cute outfits in the crowd, I noticed.

Did I ever tell my Sex and the City story? I probably did. Well, here it is AGAIN. When the show was on the air they filmed many times in my neighborhood. Unlike most film crews, they were always very nice. A friend said that was because they knew they’d have to keep coming back to the same neighborhood. Film crews can be incredibly rude. I would guess they’d say people on the street can be incredibly rude, and that’s probably true, too.

Once, when they were filming a scene with Carrie and Big, the crowd started interacting with the characters. “Don’t do it, Carrie!” “You can do better than this guy!” They had just wrecked the scene, but instead of yelling at them, Chris Noth turned around and started argung with them, in character. I couldn’t hear him myself, or I don’t remember what he said, but he was cracking the crowd up. The crowd and him went back and forth for a minute or two, it was a lot of fun for those of us watching. There was a wonderful spirit on the street afterwards. It was a lovely warm night and I walked home happy.

I was so glad to read that the Sex and the City movie is finally going to happen!! It will be so nice to see all the girls again.

YOU can sing in a choir or chorus by Richard J. Faber