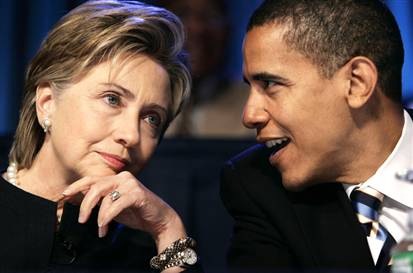 It’s such a difficult choice. I like Hillary, I could just re-post an earlier explanation of why I identify with her, but I like Hillary. And I want a woman to be president already. I can’t believe how backward we are in this. England, India, Pakistan, etc., all had female leaders before us.

But on the other hand, as other people have brought up, so many people hate her. Electing Hillary may keep our country at war with each other. Obama, however, might be able to un-do everything Bush and the republicans have done to divide the country and bring us back together. It’s not fair. It’s like rewarding the senseless misogyny (whenever I ask people why they hate her exactly, their reasons are vague). Also, the kids like Obama. And, as other have also pointed out, electing him might also help with the whole rest of the world hating us thing.

It sucks though. Because all things being equal I would want Hillary, no question. (The photograph is an AP file photograph by Evan Vucci.) You know, fuck it, I’m still supporting Hillary. Let people be mad. It’s a process that must be gone through and the sooner the better. Get mad, have your temper tantrum and get over it.

I Need to Make this Girl Cry

More Reasons Why I Want to Marry Michelle Obama

9 thoughts on “Why oh Why Are They Running at the Same Time?”