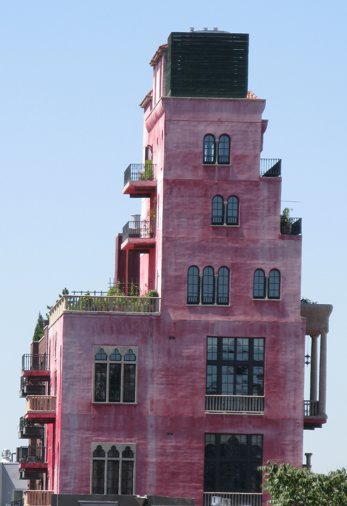 There was a guy on the roof next door talking on the phone and eyeing me warily as I took pictures.  Probably making drug deals. (More likely complaining about his roommate where they couldn’t hear.)

This is a picture of artist/filmmaker Julian Schnabel’s building.  I was admiring it the other night at the party, and everyone else was saying the pink was ugly, but you couldn’t tell at night.  I agree that the pink is not as nice during the day, but I still love it.  I think it’s one of the prettiest buildings in my part of town.

The pictures this camera takes are astounding, but I don’t think you can tell after I’ve shrunk them down in size and resolution for the web.

Also, I didn’t like the exposure it was choosing for a lot of shots, although I could see why it chose what it did. But I have to learn how to control everything manually.  It’s interesting that the better the quality, the more I can tell what I don’t like.  This camera may have been over-kill if all I do is shoot for the web and shrink them down.

Here’s another shot of the Schnabel building, which gives a more accurate representation of the distance between us.  I wish I could remember what people were saying about it, something along the lines of he’s been importing it brick by brick from some place in Italy, a la William Randolph Hearst and San Simeon. 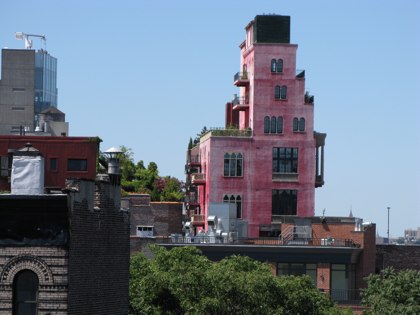 I Know A Lot of Karens, It Turns Out

My Pub Date is in Six Days

Reach Out in the Darkness

4 thoughts on “From My Roof With My New Camera”