Thanks to my friends Jackie, for googling and figuring out what the problem was, and Hadley, for repairing the database tables.  Thank you Jackie and Hadley!!

Last night the moon was bigger than normal.  From NASA’s website:  “Some full Moons are genuinely larger than others and this Friday’s is a whopper. Why? The Moon’s orbit is an ellipse with one side 50,000 km closer to Earth than the other … making it 14% bigger and 30% brighter than lesser full Moons we’ve seen earlier in 2008.”

I have to be honest, had I not known this was happening I never would have noticed.  But when I stopped to take pictures, I loved that everyone around me knew this was going on.  A girl walking by said “the moon, right?” when I pulled out my camera, and a small group stopped to watch behind me while the most knowledgeable among them explained to the others what was happening.

I tried, unsuccessfully, to get a shot through the Ginkgo trees because the moon looked more dramatic that way and I just read this on the NASA website.  “For reasons not fully understood by astronomers or psychologists, low-hanging Moons look unnaturally large when they beam through trees, buildings and other foreground objects.”  But they said watching it when it’s low to the horizon is the most dramatic, that’s when you would get the full, larger, effect. 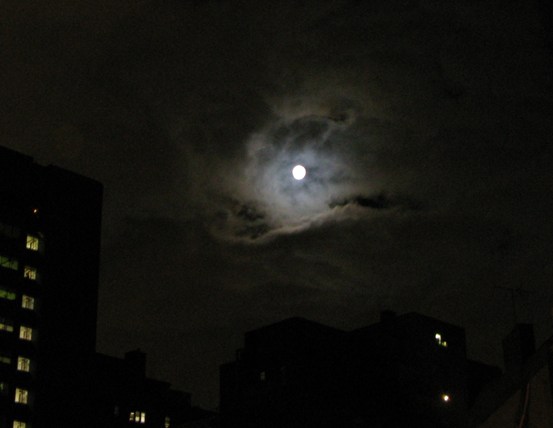 I Don’t Want to go Back to Normal Yet

2 thoughts on “Comments are Back!! Woohoo!!”