“You gain strength, courage, and confidence by every experience in which you really stop to look fear in the face. You must do the thing which you think you cannot do.” -Eleanor Roosevelt.

Earlier this week I did something I’ve wanted to do for a long time, but I’d always been too afraid.  I wanted to sit down and talk about something that happened to me a long time ago. The specifics of what happened aren’t really important to the point I want to make.  But I’ve been haunted by that night my whole life. In times of great stress I used to relive it, which was horrible, and even though that stopped happening years ago, deep down I feared it might one day return and I just wanted to confront it once and for all.  Had I been suffering from PTSD, can it return, etc.?  I wanted to talk it out with someone who knows about this sort of thing. It seems like such a little thing, I know, but talking about it, even thinking about it, always gave me panic attacks, so for me, sitting down and going over the whole thing was like climbing to the top of the highest building and jumping.

But I finally did it.  I’ve been floating in this bliss of peace ever since. I cannot describe how good this feels, but that Eleanor Roosevelt quote is pretty good. You jump, risking going splat on the pavement and instead land safely in a pile of down pillows and kittens.

And, because I don’t like to have a post without a photograph, here’s a picture I took yesterday, it’s a detail on a building on Bleecker Street. 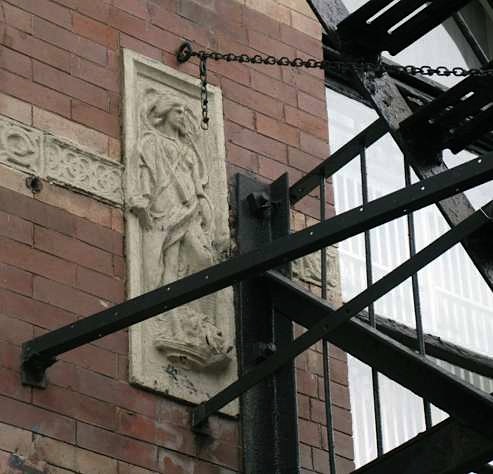 Barnes & Noble TV and Why I Love George Saunders

One thought on “I Deserve a Pedicure”