The previous box I was using was working well, but two things made it really hard to clean.  One, it was really heavy. It was made of this industrial strength plastic which probably made it durable, but HEAVY. And two, there was this grid on the inside, and washing the litter out between the groves took more time, and since I clean out the litterbox twice a day, it had become such a production it was making me miserable.

So I bought this storage box at Bed, Bath & Beyond, took it to a hardware store where they cut a square out in the front for easy kitty access and voila!

Downside: the plastic is flimsier and I will have to replace it sooner, which is a fair trade-off. Also, I made the kitty-access-opening too big and the cats are spraying litter out a little too easily.

But I will correct that in version II. I am satisfied. I should manufacture and sell this. First thing I’d do is make it in decent colors. I can’t get over the drab, drab, drab colors most litterboxes come in. 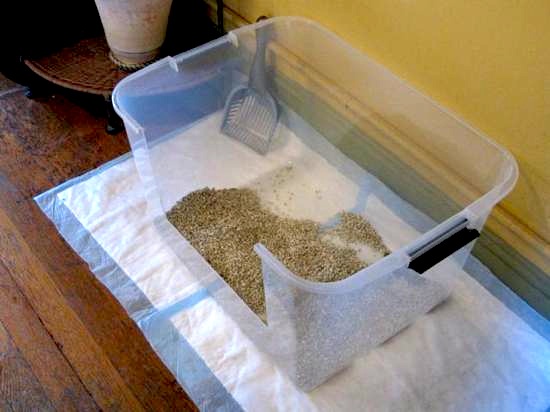 The Torture of Author Photos